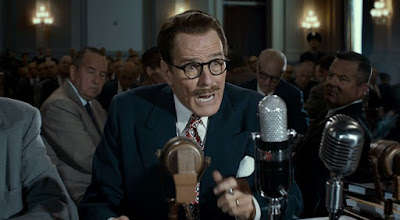 Any country and every country have dark days in their past. For the U.S., you don’t have to look too hard to find things lie centuries’ worth of slavery or the Japanese internment camps. The time of HUAC, the House Un-American Activities Committee certainly exists as one of the most shameful from a civil liberties perspective. During this time, people were jailed for their beliefs, a version of Orwell’s thought police trying to restrict what went on between someone’s ears. One of those jailed was screenwriter Dalton Trumbo, who is naturally the focus of the film Trumbo.

Flash back to the war years where Dalton Trumbo is one of the most successful Hollywood screenwriters in history. The man had a golden typewriter and was a natural for the film industry, having come from a world of writing fiction (the man had previously won a National Book Award). But, as was not uncommon at the time, Trumbo joined the Communist Party during the war. The U.S. was allied with the Soviet Union, after all, and no one was more anti-fascist than the communists. While certainly not what anyone would call patriotic, there was far less stigma attached to the idea of communism in the early 1940s.

But then the Cold War started, and suddenly being a communist was a terrible thing to be. The creation of HUAC and a shift in the temperament of the Supreme Court meant that anyone who was or had been a communist would soon find himself on the business end of a House investigative committee. Anyone who wasn’t willing to name names and point fingers at other communists stood a good chance of doing time for contempt of Congress.

The first half of Trumbo deals with this part of history. We see Dalton Trumbo (Bryan Cranston) interacting with a number of other Hollywood communists and extreme left-wing Democrats including Edward G. Robinson (Michael Stuhlbarg) and fellow screenwriters Arlen Hird (who is actually an amalgam of several different writers, and is played by Louis C.K.) and Ian McLellan Hunter (Alan Tudyk). The “Hollywood 10” fight back, but all refuse to admit to being communists and refuse to name names. This puts all of them behind bars for a time, at least those who were subpoenaed. Ian McLellan Hunter was not, and when Trumbo gets out of prison, he uses Hunter as a front for his own script for Roman Holiday. Eventually even this path to getting his work on the screen dries up as Hunter is blacklisted as well.

And therein lies one of the more interesting parts of the film. Trumbo, desperate for money and unable to use his name, begins writing for Frank (John Goodman) and Hymie King (Stephen Root), two ultra-low-budget filmmakers who are only too happy to have someone of Trumbo’s caliber working for them, especially at rock-bottom, no-name-on-the-screenplay prices. Eventually, the Kings are able to give Trumbo so much work that he’s hiring his fellow blacklisted writers to help get all of the work done. When one of his screenplays is nominated for best writing, the world goes crazy looking for the author, who is merely a Dalton Trumbo pseudonym.

Throughout all of this, the main foil isn’t the original HUAC leader J. Parnell Thomas (James DuMont), later leader Robert Stripling (Johnny Sneed), or even John Wayne (David James Elliott). The most obvious threat in the movie to everyone as well as the American way of life that includes free expression, the figure that stands astride this issue more than anyone, is former actress turned gossip columnist Hedda Hopper (Helen Mirren). And this is one of the problems of a film like this one. I don’t really know if any of the characters were more decent than anyone else. Do I suspect that this is taken at least in part from reality? Sure. But I have no idea if the woman was really this potentially nasty and threatening, nor do I know for sure that she was this passionate an anti-communist. I do know that Helen Mirren plays her as a woman I wouldn’t want to spend any actual time with.

Bryan Cranston was nominated here, and it’s a worthy performance. Cranston is best known as the central character from Breaking Bad, which I have not seen. Cranston handles Trumbo as if the man is driven by an inner demon to make the world right, even at the expense of everything else. His wife Cleo (Diane Lane) is the one grounding influence in his life. In fact, one of the better scenes is her more or less talking him out of becoming little more than a task-driving bully to their children. The third performance I think is great here is John Goodman. Someone needs to get this man a nomination. He nails quirky performances better than just about anyone in th business, and Frank King is pure character and pure magic.

In fact, the only problem I really have with Trumbo is the character of Arlen Hird. Don’t get me wrong; I love Louis C.K. and I think he’s great in a role like this one where he can be mainly dramatic but still has a few good comic lines. But I don’t like the break with history. I understand why it was done—Hird as a character takes the place of multiple real people who might not individually be important enough but are worth including as an amalgam character. It still tweaks me though.

Hell of a movie. It’s smart, and the story is an important one. And these days, perhaps knowing what our rights actually are and what rights people might like to take from us is worth knowing.

Why to watch Trumbo: A story of hope in a dark time in American history.
Why not to watch: Whenever history gets messed with, I get a little squirrely.