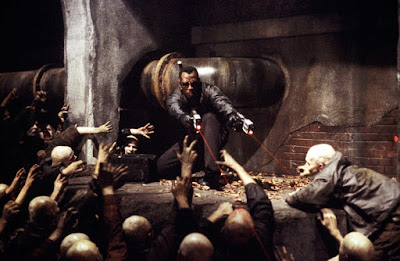 If I were to make a Mount Rushmore of Guillermo del Toro films, Blade II would not make the cut. In fact, of his 10 films that I’ve seen, Blade II ranks 8th. However, it’s the best of the Blade movies by far. Part of that comes from the inventive direction of Guillermo del Toro, who is my favorite working director, so I admit to some potential bias here. Some of it comes from a really good story, one that is frankly the best of the three films. Part of it comes from some action set pieces that are as good as you’ll find in horror movies or action movies.

Blade II picks up a couple of years after the first film. Blade (Wesley Snipes), a half-vampire who has all of their strengths and none of their weaknesses, is still spending his time hunting vampires. This time, though, he is also hunting his mentor, Whistler (Kris Kristofferson), presumed dead at the end of the first film, but actually turned into a vampire and regularly tortured by the vampire nation. Blade is now assisted by a mechanic who calls himself Scud (Norman Reedus). The film opens with a confrontation between Blade and some vampires, culminating in him learning the location of Whistler. One rescue later, and Whistler is back on team Blade.

Shortly thereafter, Blade’s headquarters is raided by a couple of vampires who are offering a truce. In the Blade universe, vampirism is transmitted by a retrovirus. This retrovirus has mutated, creating a new strain of vampires dubbed “reapers.” These reapers have all of the basic vampire strengths and very few of the weaknesses. They have particular new qualities, though. They are far more feral, have a need to feed daily (at least), and also tend to feed on other vampires, turning them into reapers. While most of the reapers appear to be mindless, the original carrier of the new virus, a vampire named Jared Nomak (Luke Goss), is intelligent. Essentially, the vampires have recruited Blade to help them deal with the reapers, since their numbers are growing geometrically. While the virus has only existed for a few days, there are already dozens of them running in an increasingly growing pack.

So, naturally, we’re going to get some friction as Blade is brought in to work with a group called the Blood Pack, who have been training to take him down. The Blood Pack seems to be nominally led by vampires named Asad (Danny John-Jules) and Nyssa (Leonor Varela), the philosophical heart of the group appears to be that of Reinhardt (Ron Perlman), who hates Blade with a true intensity. There are some fireworks initially between Reinhardt and Blade, of course, before the group heads out to hunt the new menace.

The film works on a couple of basic stories running at the same time. On one level, there is the reaper threat, which is a real one. The reapers are immune to silver (Blade’s main weapon against normal vampires) and appear to be only affected by sunlight and the desperate need to keep feeding. There is also a great deal of tension between Blade and the Blood Pack. While Asad, Nyssa, and a third vampire named Snowman (Donnie Yen) appear to be willing to work with him, the rest are openly hostile, waiting for their chance to strike at their most feared enemy. And, naturally, there is going to be a love story here, too. An understanding happens between Blade and Nyssa, which leads to something like an attraction despite their clear differences.

All of that is pretty straightforward, but it really does all work. Where Blade II really shines is in the action sequences. A couple of them are marred by some very primitive CGI work that shows its age (it was decent for the time, but obvious to modern eyes), but most are purely practical combats that involve Wesley Snipes kicking a significant amount of ass with a variety of weapons.

In fact, the action sequences are simultaneously the best thing about Blade II and the thing where I have the biggest disconnect. In the Blade universe, it’s established that mere contact with silver causes a vampire to turn to ash almost immediately; the slightest touch is fatal to them. Naturally, Blade uses a number of silver weapons to his advantage—a mere scratch with one causes the vampire victim to burst into flame. Despite this, he spends a great deal of time beating the crap out of his enemies, punching them repeatedly before finally striking with a silver weapon. I get why this is the case. Watching a bunch of vampires turn into so much reddened ash is fun, but only for a time. We want to see an actual fight sequence (all of which were evidently choreographed by Donnie Yen), which means that Blade throws a lot of kicks and punches when he could simple drop someone with a silver bullet or tap them with one of his silver stakes/blades/throwing devices. Why? Because it looks cool, and there’s a certain need for style for at least some of this.

Honestly, though, that’s my only real complaint here. Wesley Snipes is fun as Blade and Kris Kristofferson is curmudgeonly and funny throughout. I could live without the romance angle (it’s not really necessary and leads to a gratuitous moment near the end), but it is what it is. This remains a solid action movie with some good horror moments and a tremendously entertaining number of villains. The new version of the vampires—their entire lower jaw opening up into a pair of insect-like mandibles—is really cool and shocking when it first happens.

Why to watch Blade II: While it’s not much of a horror movie, it’s a great action movie.
Why not to watch: You need to suspend disbelief a lot.