I Call it a Kaiser Blade 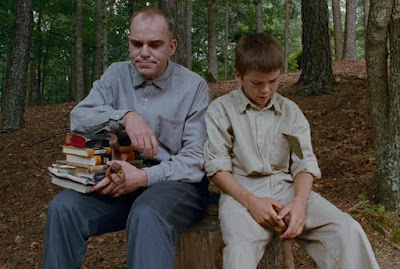 If you go back far enough in the archive of this blog, you’ll find a response where I say I hope to watch Sling Blade by the end of that year. I think it’s some time in 2012 or 2013. Well, here we are approaching a decade later and I’m just now getting around to it. Best laid plans, spirit is willing, whatever. I’m here now.

I vaguely remember when Sling Blade came out, because everyone thought Billy Bob Thornton was someone who wasn’t so much acting as more or less a real-world version of the banjo kid from Deliverance given a starring role. It really is that deep of a performance, so it’s worth mentioning that Thornton not only had a career long before this, but that he also wrote the play on which it was based, adapted his own play, and directed. I’m reminded of how shocked my mother was when Daniel Day-Lewis walked on stage for his Oscar for My Left Foot. Mom was unaware that he wasn’t physically afflicted and was similarly unaware of his rather robust career before that role.

Anyway, Karl Childers (Thornton) has spent most of his life institutionalized. Karl is mentally disabled in significant ways, which is what prevented him from going to prison. It seems that when he was younger, he discovered the local bully having sex with his mother, so Karl, assuming his mother was being attacked, nearly decapitated her attacker with the eponymous sling blade, which is a brushcutting axe that looks a hell of a lot like a billhook. When he discovered that his mother wasn’t so much being attacked as she was a willing participant, he killed her, too. As the movie starts, Karl is being released. He’s served his time and is essentially declared sane enough to go out on his own, but Karl has nowhere to go.

The director of the institution (James Hampton) arranges for Karl to get a job fixing lawnmowers and other small motors for a local repair shop. Karl lives in the shop for a week or so until he moves into the garage of young Frank Wheatley (Lucas Black) and his mother Linda (Natalie Canerday). He also becomes acquainted with Linda’s boss at the local dollar store, Vaughan Cunningham (John Ritter), who has the misfortune to be gay in small town Arkansas.

Now that you have this as the setup, it shouldn’t be that difficult to figure out what the third act is going to be.

There are good performances all through Sling Blade, but they really do start and end with Thornton himself, who is absolutely transformed and almost unrecognizable as Karl. There is a certain level of connection here to a performance like the one of Tom Hanks in Forrest Gump in that Karl has a number of personal quirks, many of which come out in the way that he talks. It’s not just his guttural monotone, but also his “mm-hmm” he uses as a sort of punctuation. Everything about Karl calls out aspects of his character, though. Thornton is a capable actor, but this is the most complete role and performance of his career. I like how relatable Karl is. It would be very easy for this performance to quickly become overwhelming, and yet it never does, and it never really becomes comic. Karl is clearly vastly different, but he is completely human, and his relationships, especially with Frank, are very real and human as well.

It’s also worth noting that Dwight Yoakam should have gotten some love for this performance. For being such a seeming non-presence physically in so many ways, Yoakam plays a very good heavy. He’s either an extremely capable actor or he’s actually this much of an asshole in real life. I find him mostly memorable in this sort of role, and like Thornton, this might be his best work. His ugliness and pettiness is so normal and natural that it genuinely feels like the real thing.

I’m happy to have finally seen this. I probably should have seen this before now, but at least I finally got here.

Why to watch Sling Blade: Billy Bob Thornton.
Why not to watch: It’s very clear where it’s going to go soon enough.