Film: I Know What You Did Last Summer
Format: DVD from Cortland Public Library on The New Portable. 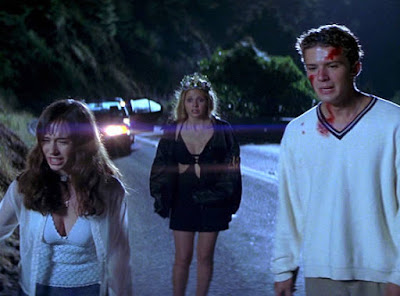 In the world of slasher movies, I Know What You Did Last Summer ranks as one of the dumbest. Seriously, if you didn’t know that this was a slasher movie going in, it could be an entry in just about any genre. A wacky rom-com where the couple dated the year before but broke up? Well, they know what each other did last summer! Hijinks abound! But no, this is what Siskel and Ebert used to call a “dead teenager” movie, where the cast starts with a group of teens and slowly whittles them down.

So, we start in a little costal town in North Carolina where most of the men are fishermen and most of the kids seem to want to get away. The movie takes place on the Fourth of July, which naturally coincides with this town’s little town festival. I guess there are some of those that happen in the summer. As a nearly life-long Midwesterner, all of the local town celebrations that I remember take place in the fall, around harvest. Anyway, a part of this local celebration is electing the new beauty pageant queen. Because we evidently want to think that our main characters have some sort of value, one of them, Helen Shivers (Sarah Michelle Gellar) wins and gets to wear a fancy tiara.

What immediately follows is going to determine the course of the film. Helen and her beau Barry (Ryan Phillippe) along with Julie (Jennifer Love Hewitt) and her guy Ray (Freddie Prinze Jr.) go out to spend some time on the beach with each other. This is supposed to be especially poignant for them, since at the end of summer they will be going their separate ways to some extent. Helen wants to go to New York to act, and Julie is heading to college, as is Barry, who is going on some sort of athletic scholarship or another. And then it happens—on the drive home from the beach, they strike someone on the highway. Panicking, they decide to drown the victim, and do so, only to realize he is still alive. They toss him into the ocean anyway and make a pact to never speak of this again. Fast forward a year to the next Fourth of July. Julie has come home from college, as has Barry. Helen has failed as an actress and is back as well. Ray has never left and is now working as a fisherman. We also learn that the events of the previous year have caused a rift between the four of them. They have all lost contact and seem to resent the presence of each other.

But all of this is in service to our main course—the murdering of these teens by the vengeful revenant/ghost/spirit/somehow survived dude from the year before. The first victim, since we need to be sure that there is going to be a killer here without risking any of our main quartet, is Max (Johnny Galecki, better known as the non-Sheldon character on The Big Bang Theory). Max happened to drive past the incident the year before so he is somehow complicit in what happened. Or something. It doesn’t matter, because this introduces us to our killer. He dresses in grey Gorton’s Fisherman gear and carries around a massive hook normally used to grab and move fish. So, unique-ish killer, unique-ish weapon.

Anyway, what happens is what you expect to happen. The Fisherman (Muse Watson) starts to kill people off and starts targeting our four main characters. Of course, there are going to be other deaths here as well, but these four are going to get the brunt of the abuse. Naturally the killer is going to play around with his potential eventual victims, teasing them rather than killing them outright. The four will start doing some investigating and attempting to figure things out. There will be a couple of red herring-style leads and some incorrect assumptions before the final few minutes when everything comes to a head and we get a final confrontation.

I probably don’t have to tell you a great deal about what the problems are with I Know What You Did Last Summer. There’s nothing here that’s very interesting or new or special. When the first thought of a film like this is, “Well, they wasted Anne Heche in this,” it’s generally not a good sign. Heche, for the record, is fine in this as the sister of one of the candidates for the guy who got run over the previous year. Seriously, though, if Heche is the best part of the movie, there are going to be problems.

The truth is that slashers tend to be on the low end of the horror movie entertainment spectrum for me. There are some that are fine, but most are lazy, offering jump scares and hints of gore instead of actual horror. They are lowest common denominator films, and I Know What You Did Last Summer doesn’t even aspire to be interesting. Sure, the killer at least has an interesting look, but so what? The film tries to create a sense of suspense by showing us the Fourth of July parade where, inexplicably, there are people dressed in full raingear in the audience. Why? Is it because they don’t have other clothes? No—it’s because we’re supposed to be confused as to the identity of the Fisherman. And so, for a moment’s confusion or two (the actual Fisherman shows up moments later) we’re left believing that half of this town is suffering from mercury poisoning.

Next year, I’ll remember what I did this coming summer, but I won’t remember this movie fondly.

Why to watch I Know What You Did Last Summer: One of the dudes from The Big Bang Theory gets killed with a fishhook.
Why not to watch: It’s not even standard slasher fare.

Email ThisBlogThis!Share to TwitterShare to FacebookShare to Pinterest
Labels: horror, I Know What You Did Last Summer, Jim Gillespie