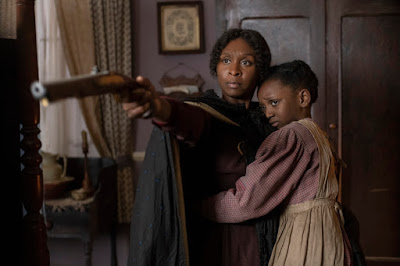 I suppose when it came down to it, I knew that Cynthia Erivo was going to be nominated for an Oscar for Harriet. I mean, I wasn’t 100% sure because stranger things have happened than a black actress being snubbed at the Oscars, but given the role and the film, I would have bet money on her being on the docket. Not nominating the actress performing in the title role of the Harriet Tubman biopic would be an oversight that Oscar would never hear the end of unless the movie (or performance) were laughably bad.

Well, that’s not the case, so Ervio got her nomination. The truth is, though, that it’s impossible not to be at least a little bit disappointed with Harriet. This is a movie I wanted to like a great deal. Harriet Tubman was what some (including me) would call a BAMF. An escaped slave herself, she returned time and time again to slave-holding states to help free others and take them north. When the laws changed to allow essentially bounty hunters to recaptures escaped slaves even in northern states, she moved her charges all the way to Canada.

So what’s the problem here? First, Harriet is a hagiography. That’s not too surprising, really. I didn’t expect that this was going to be a warts-and-all biography of someone who is not merely a folk hero, but an actual legitimate hero. I expected that any faults that might show up in our title character would be minimal, or would be the type to be overcome by the end of the movie. So, while this is an issue, it’s not a huge one.

A much bigger problem, at least for me, is that Harriet appears to want to tell us that Harriet Tubman had supernatural powers. We’re given the information that she has “spells” where she essentially loses contact with the real world. Admittedly, we’re dealing with a much more superstitious time, so it’s not surprising that the people around her attribute her spells to essentially being about contacting a higher power. It’s much more disappointing that the movie seems to hold that viewpoint as well. Harriet has a spell and right after, she’s given the right information, almost as if her prayers are being directly answered.

I don’t want to dive too deeply into the theology here, but I will for a moment. I find it fascinating that a religion (Christianity in this case) that really wants to push the narrative that the Bible (and thus their church) is anti-slavery. This is funny, because nothing could be further from the truth. The Bible is wildly pro-slavery (give Exodus 21 a spin sometime), which makes it difficult for me to assume that a pro-slavery deity is helping slaves escape. I genuinely appreciate that that movie doesn’t shy away from this at all points. In an early scene, a pastor preaches to a group of slaves and brings up the Thessalonians verse about slaves obeying their masters, even the cruel ones.

But, pro-slavery god or not, the one that Harriet believes in appears to be so firmly anti-slavery that he guides her faultlessly throughout the film.

Like I said, I really wanted to like Harriet a lot more than I did. It’s great to see not just a woman, but a woman of color directing this. I think in that respect, we get a little more of Harriet shining through than we would have with a male director using the same screenplay. But there’s no reason for this to turn into a film that turns on her religious conviction, particularly when that conviction is so clearly falsified by the source document.

As for Cynthia Erivo, she’s good. The problem here is that she’s not really given enough to do. Her job throughout the movie is to stick out her chin, say that she doesn’t want to be a slave, and then hush people she’s leading north. We deserve better than this story. So does Harriet.

So yeah, I really wanted to like this. It didn’t need to be fancied up. The source material should have been enough.

Why to watch Harriet: I can’t believe it’s taken this long for this story to be turned into a movie.
Why not to watch: Harriet Tubman was badass. She didn’t need to be made supernatural.