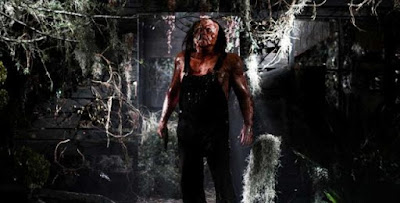 Of all of the subgenres of horror, torture porn is absolutely my least favorite and a genre I tend to avoid as much as I can. North of that, but not very far north, are slashers. I don’t love slashers in general. I have to be in the mood for them, and I’m not in the mood for them that often. More or less, I don’t really see the point of them. Slashers can be fun, but also feel pointless. There’s no message in a slasher. It’s about body count, and (at least in the best of cases) creativity in the kills. But they are a beloved subgenre for many people, which leads us to Hatchet, a film that wants nothing more than to dive into that slasher past.

Because it sells itself as an homage to classic slasher movies, Hatchet isn’t going to take itself very seriously. This is, I am almost sad to say, yet another version of creating a horror comedy. It does make me question why horror/comedy is such a common genre mashup. There’s an occasional horror musical (like Repo!) and horror romances and horror westerns. Horror and science fiction are so closely tied together that it’s not worth bothering to call it a mashup. But horror and comedy are united in odd ways. I think it has something to do with the nature of comedy rather than the nature of horror. Hatchet attempts a different way to walk that path. The results are…interesting.

Hatchet takes place in and just outside of New Orleans during Mardi Gras. Ben (Joel David Moore) has recently been dumped by his long-time girlfriend and is not having a good time in the Big Easy. His friend Marcus (Deon Richmond) decides to stick with him, which means in this case going on a haunted swamp tour. They attempt first to go on one with Reverend Zombie (Tony Todd), but he sends them packing. Eventually, they wind up with Shawn (Parry Shen), who is clearly incompetent and soon runs his boat aground. Trapped along with Ben and Marcus are an older couple, an amateur porn director and two feuding starlets, and Marybeth (Amara Zaragoza).

Naturally, the boat has run aground near the old Crowley residence, so we get the story of Victor Crowley (Kane Hodder), a deformed boy who was killed in a freak accident. According to the legend, Victor is still around, reliving the night of his death, and killing anyone who comes too close. So, the rest of the movie is going to be Victor Crowley killing everyone in the tour group one at a time in brutal and horrible ways. Honestly, the plot isn’t worth going into. I’ve told you what it is.

Hatchet wants to do exactly two things. First, it wants brutal kills, which it provides. People get their heads twisted off, their faces abraded with a belt sander, and limbs ripped off like the wings off flies. Second, it genuinely wants to produce some laughs.

Here’s the thing. It kind of does. There’s nothing in Hatchet that is side-splittingly funny or that is going to be remembered as a classic movie joke, but there are a few moments that are actually pretty good. Reverend Zombie’s “scary” tale of why he doesn’t do swamp tours, for instance, is pretty good. There’s also a joke involving the porn movie that the guy on the boat is making that is genuinely laugh worthy. A lot of the other jokes and funny moments are a bit clichéd, but aren’t insultingly stupid the way they often are in spoofs and horror comedies. In that respect, Hatchet is actually surprising when it comes to the genre mashup.

Hatchet is exactly what it wants to be and nothing more. It’s never going to be someone’s favorite movie (okay…it probably is, but it’s not one you’re going to hear mentioned that often), but it’s also aimed very precisely. It’s exactly what you think it’s going to be going in. There are a couple of jokes that hit home, Victor Crowley is suitably nasty looking and scary, and the kills are bloody and violent. It’s not going to replace any classics in the genre, but if you like the basic idea of a slasher, you’re not going to hate it.

In terms of its genre, Hatchet is inoffensive. Whether that’s comforting or damning is entirely up to you.

Why to watch Hatchet: It is very much old-school slasher.
Why not to watch: When Joel David Moore is your lead, you have issues.