Santa Claus is Coming to Town 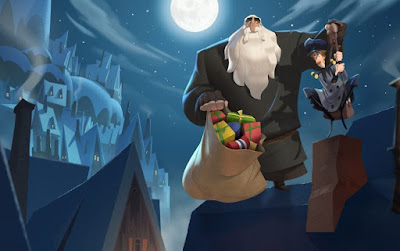 Watching a Christmas movie in May is perhaps not the strangest thing I have done. It’s not even the strangest thing I have done in the last couple of months. That said, when the Oscar list includes a holiday film, I knew I’d have to get to it sooner or later, and tonight seemed like a good time. The movie in question is Klaus, an animated film from NetFlix, which means that it’s streaming and probably will be streaming for the rest of time, so Christmas film or no, you’ll be able to watch this whenever you feel like it.

Like a number of Christmas films that come before this one, Klaus is more or less a Santa Claus origin story. We’re going to see how the legend started, but in this case, it’s going to come from the point of view of someone else. We’re also going to get some elements of classic drama here. It’s interesting that IMDb classifies Klaus as a comedy. Certainly there are some comedic elements here, but I think it’s far closer to a drama. The humor isn’t really front and center.

We start with Jesper (Jason Schwartzman), the spoiled-rotten son of the Postmaster General of his country. His father has forced Jesper into the postal academy, which has caused Jesper to react by doing everything he can to more or less fail out. Thinking that this will just get him kicked out of the academy and back to his life of luxury, it comes as a rude awakening that, as a punishment for his behavior, his father is granting him the title of postman and sending him to Smeerensburg, a blip as far away from the capital as possible. He’s told that if he doesn’t get the people of the town to post 6000 letters in the next year, he’ll be cut off.

Unhappy with his lot in life, Jesper goes to Smeerensburg and finds a feud between two families. The Ellingboes, led by Mr. Ellingboe (Will Sasso) and the Krums, led by Mrs. Krum (Joan Cusack) have fought each other for as long as anyone can remember and longer. The town is a warzone, and no one sends mail to anyone else because the people generally hate each other.

In fact, the only people not directly involved in the war are Mogens (Norm MacDonald), who operates the ferry between the mainland and Smeerensburg’s island; Alva (Rashida Jones), who came to the island as a school teacher and now runs a fish shop in an effort to make enough money to leave; and Klaus (J.K. Simmons), a woodcutter who lives on his own at the other end of the island. It is when Jesper finally meets up with Klaus that everything changes.

As it happens, Klaus has a houseful of toys. Through a series of minor mishaps and coincidences, Klaus and Jesper deliver a toy to a young boy in the town, and soon the legend is born. Children learn that if they write a letter to Klaus, he will respond by giving them a toy. Naturally, this helps Jesper, since suddenly children are sending letters. Those who can’t write more or less force Alva to reopen the school so they can learn. And soon, the children of the Ellingboes and the Krums are talking to each other without fighting. And soon enough, the parents are doing the same. The patriarch and matriarch of the two clans find all of this peace to not be of their liking, and thus begin to plot against the postman and his allies so they can get back to trying to kill each other.

As I said above, there’s some cliché here. I pretty much knew what beats were going to happen when they happened, and there weren’t a great many surprises for me in Klaus. That’s okay, though. The movie is genuinely sweet, and I have trouble thinking that anyone would be terribly offended or troubled by it. The message, which comes more or less with the transformation of Jesper from being the spoiled rich boy seeking a way to get off the island into someone who realizes what he is doing is something powerful and good, has been played out over and over. And so what? Klaus, clichéd as it might be, tells this story well.

I like how seamlessly it incorporates elements of the Santa Claus myth into the story. Children are happy getting toys, but one child who was a bully to Jesper on his arrival, is denied a toy by Jesper and given coal instead. Why? Because he was naughty. And when confronted with this, told that the only way Klaus would know is if Jesper told him, Jesper responds by saying that Klaus sees everything and keeps a naughty list of children who won’t get presents. We get the reindeer, the presents, the laugh, even the red suit. It’s actually quite clever.

I also like that Klaus includes a large section of indigenous people. The film clearly takes place in Finland or something like it, because the Sami people are a tribe from that part of the world. A young Sami girl named Margu befriends Jesper, and while they don’t have a language in common, they become good friends. I like how carefully Klaus depicts the Sami. They are integral to the way the movie plays out, and by their nature are kind of exotic, but the film never exoticizes them or plays them as quaint. It treats them with a great deal of respect, and that’s refreshing, too.

In truth, I enjoyed this a great deal. I didn’t expect much, but this did not disappoint.

Why to watch Klaus: It’s a sweet story nicely told.
Why not to watch: Like many a movie for kids, it dabbles heavily in cliché.