Film: The Killer Shrews
Format: DVD from personal collection on The New Portable. 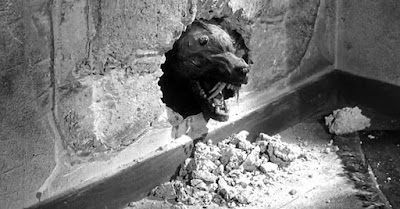 Every now and then, it’s fun to jump into the shallow end of the pool. You’re not looking for anything too difficult or that asks any real questions. You don’t want to be challenged that much, and your need for entertainment is relatively low. That’s when a movie like The Killer Shrews, bad enough that it was featured on Mystery Science Theater 3000 but not so bad that they were willing watch it, fills the bill. With a running time just under 70 minutes and a paper-thin plot, sometimes it’s all you need when you’ve had a crappy day.

The high concept here is not going to be surprising. Boat captain Thorne Sherman (James Best, most famous for playing Sheriff Roscoe P. Coltrane on The Dukes of Hazzard) and his assistant Rook Griswold (“Judge” Henry Dupree) show up at a remote island with a cargo of supplies for the people who live there. However, they’re not ready to unload the ship any time soon—there’s a hurricane brewing. They encounter the people who live on the island and discover that it’s a sort of research facility. There is a doctor named Marlowe Cragis (Baruch Lumet), his daughter Anne (Ingrid Goude), lab assistant Radford Baines (Gordon McLendon), Anne’s former fiancé Jerry (Ken Curtis) and, natural, Mario (Alfred DeSoto), the help.

Turns out that the scientific research being done is on overpopulation, and the creature they are using to study it is, naturally the titular shrews. But since shrews aren’t that scary, we have to beef them up, which means that the island is now home to a couple of hundred giant shrews, weighing in the range of 50-75 pounds. Since shrews typically eat three times their own body weight every day, this means that the humans on the island are soon going to be on the menu.

That’s pretty much it. We’re going to have people picked off one-by-one, of course, and the survivors will slowly attempt to come up with a play that deals with the shrews themselves as well as the incoming hurricane.

The surprising thing is that for as dumb as the premise of this movie is, it honestly isn’t that bad. Oh, don’t get me wrong—it’s not that good, but there’s some connective tissue here to a movie like Night of the Living Dead. We’ve got a group of people boarded up inside a house with a gang of vicious creatures attempting to get inside to eat them. Change the shrews to ghouls, and the movie honestly isn’t that different in a lot of respects.

Okay, the quality is certainly different. The biggest problem with The Killer Shrews is that there’s a whole lot of nothing happening for large stretches of the film. The main activity, aside from talking, is drinking. Jerry is portrayed as a semi-functioning alcoholic, but everybody else drinks about as much as he does.

I am serious when I say there’s at least the structure of something good here, even if what is draped over it is ridiculous. The lack of action is a serious issue. The fact that the creatures themselves are multiple layers of ridiculous is another problem. First…these are shrews. Sure, they’re gigantic killer shrews, but they’re shrews. The movie tries its hardest to make them scary, at least in theory—they eat everything, including the bones, for instance. They consume three times their body weight every day. And on and on, and still…they’re shrews. A bigger problem is that the shrews themselves are very clearly dogs with gigantic fake fangs and carpeting glued to them. One imagines that the easiest way to deal with these creatures would be to throw them tennis balls and make a run for it.

The Killer Shrews is dumb and ridiculous, and it just barely holds up without the riffing of Joel, Servo, and Crow. Were it any longer than it is, it would wear out its welcome instead of being just enough to be mildly entertaining.

Why to watch The Killer Shrews: There’s at least a structure here.
Why not to watch: So much more could be done with that structure.