Film: Anna and the Apocalypse
Format: DVD from Sycamore Public Library on the basement television. 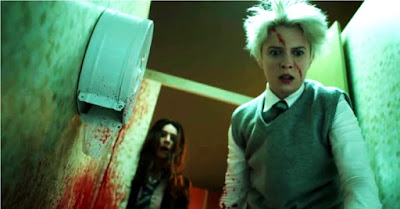 I suppose that Anna and the Apocalypse was inevitable. We’ve had zombie comedies before and we’ve had zombie romances before, so it was really only a matter of time before we got a zombie musical. Anna and the Apocalypse does diligent work in sticking to the conventions of zombie movies as well as most of the conventions of musicals (there is no clear reprise, though) in telling its story. In that respect, it’s relatively impressive.

We’re going to go through the three basic stages of a zombie comedy as established by Shaun of the Dead. We’ll spend the first act being introduced to the characters and some element of their personality while hinting at the zombie apocalypse to come. The second act will kill off a few characters while establishing the seriousness of the situation. The third act will involve either killing everyone off or a few of the characters escaping to an unknown fate. Like I said, it follows the established rules of the subgenre.

There are also a surprising amount of characters here, and most of them are ones we won’t get too involved with when it comes to caring about them living or dying. In fact, one of the characters we’re at least mildly invested in doesn’t make it out of the second act and (mild spoiler) one character we genuinely don’t care about at all makes it to the credits.

We also meet the rest of the relevant characters. We have Chris (Christopher Leveaux), a budding filmmaker and his girlfriend Lisa (Marli Siu). We have Nick (Ben Wiggins), who is sort of Anna’s ex in the sense that they’ve had sex, but she is significantly disappointed in his general behavior. We also meet Steph (Sarah Swire), a recent arrival to Scotland who feels out of place in part because of her arrival (from Canada or the U.S.) and in part because she is very clearly a lesbian. We also meet Arthur Savage (Paul Kaye), the aggressively tyrannical vice principal who hates all of the students, but seems to hate the social justice-loving Steph most of all. Oh…and it’s just before Christmas.

Anyway, the zombie apocalypse happens the night that the movie starts, and both Anna and John are oblivious to it, much like the beginning of Shaun of the Dead. Chaos happens behind them as they walk to school, and they finally figure it out when they see and kill a zombie. As it happens, neither of them saw their parents that morning. It turns out that there are a number of people trapped in the school, since they were caught there while watching the school’s Christmas pageant. Chris and Steph find John and Anna at the bowling alley where they work—they were at a homeless shelter when the apocalypse started.

The rest of the plot is essentially these characters (eventually with Nick and his friends as well) attempting to reach the high school while the people in the high school wait for help to come from the nearby military base. Since we see a lot of zombified soldiers, it’s evident that the help won’t be coming from them, and it falls to our intrepid characters to do what they can to survive.

So, it’s a pretty standard zombie movie. And there are songs. There is not, though, a zombie song, which I think is a missed opportunity. Truthfully, the songs are okay, but they aren’t really that memorable. Aside from the fish rap we hear from the school talent show (which, honestly, is pretty great), the songs aren’t anything that special. In that respect, this fails as a musical.

I get why this happened, but it really didn’t need to. It was a natural progression of the subgenre, so it was really only a matter of time. But this doesn’t work as a musical. It would have worked as a pretty standard zombie comedy, but the musical numbers feel forced and out of place. The concept is a natural one; the execution needs to be tighter to really work.

Why to watch Anna and the Apocalypse: It’s inevitable.
Why not to watch: The execution leaves a lot to be desired.