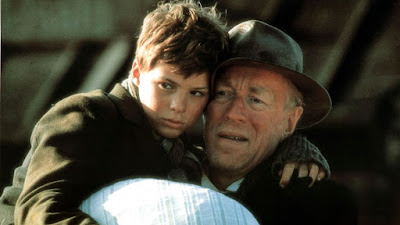 There is a moment in Pelle the Conqueror (Pelle Erobreren if you prefer) that I think will stay with me for a very long time. It’s a moment of substantial and real cruelty that is entirely believable in the characters. The film’s namesake, Pelle (Pelle Hvenegaard) has a coin which is the only money he possesses. His friend, Rud (Troels Asmussen) tells him that if Pelle will give him the coin, he will allow Pelle to whip him with a nettle bush as hard as he likes 100 times. Pelle accepts, breaks off a nettle, and beats his friend savagely, taking out all of the frustrations of the dozen years of his life on his friend’s back. It’s terrible and brutal, and very real.

Pelle the Conqueror is a misery parfait movie, a film where terrible event is piled on top of terrible event and in which nothing really good happens to anyone. The smallest happiness is repaid by brutality, and the slightest hint of breaking free of the terrible cycle that we are presented with is rewarded with horror, degradation, and suffering. This is contrasted with the truly beautiful Danish countryside, giving us the juxtaposition often seen in a film like this one—the beauty of the landscape serving as counterpoint to the vicious and ugly lives led by the people who work on it.

As the film begins, young Pelle and his father Lasse (Max von Sydow) leave southern Sweden for a Danish island after Lasse’s wife/Pelle’s mother dies. Desperate for work, everyone claims that Lasse is too old and Pelle is too young to be of value. Eventually, Pelle is given work by Kongstrup (Axel Strobye), the tyrannical boss of a large farm. Kongstrup’s main habit is impregnating the female workers on the farm and has a host of illegitimate children in the area. The workers subsist on a diet of herring and abuse while Kongstrup’s wife (Astrid Villaume) sneaks alcohol into the house to deal with her husband’s constant infidelity.

As the film continues, pretty much everything that happens ends up being terrible. Pelle becomes the target of the bullies at school specifically because he is from Sweden and not Danish. His one adult friend is Erik (Bjorn Granath), the only worker on the farm who is willing to stand up to the people in charge, specifically against the foreman (Erik Paaske) and his vicious and evil trainee (Thure Lindhardt). Naturally, what happens to Erik eventually is terrible and unpleasant.

Among the other stories we will see are the sad love affair between one of the workers and the son of the local gentry. Naturally, this ends tragically for everyone involved. The same is true of the lecherous Kongstrup, whose wife eventually tires of his extracurricular activities and puts an end to them in the most violent way possible. This isn’t a world where love blossoms or where happiness takes root. In fact, there are perhaps two or three genuinely happy moments in the entire film that last for a couple of moments, and even one of these at the very end is quite bittersweet.

My reaction to movies like Pelle the Conqueror are nuanced in the best of times. It’s hard not to appreciate the movie on some level. It is beautifully filmed, for instance, and while the story itself is terribly bleak, it’s impossible not to be deeply affected by these characters. It has a lot of similarities in ways to stories like The Grapes of Wrath. It also reminded me in places of Bradbury’s Dandelion Wine, the story of a young boy’s summer where he is forced to grow up because of events in the world around him. Because of this, I’m going to look on this with some fondness, if only because of that connection to a damn fine book by one of my favorite authors.

There are two performances in particular I want to talk about here. The first is that of Max von Sydow, the reason I watched this. It is staggering to me that the man who was the title character in The Exorcist, the central figure of The Seventh Seal, and one of the true muses of Ingmar Bergman earned only two Oscar nominations in his storied career—for this and for the execrable Extremely Loud and Incredibly Close. He was a far better actor than this and deserved all of the acclaim he got in life and so much more. He is, of course, impeccable in this film. Lasse is a man beaten down by life, but not quite willing to give up completely. He’s pitiable, but not pathetic, and von Sydow imbues him with a true and real humanity.

I also want to talk about Pelle Hvenegaard, who was evidently literally named after the title character of the original novel. This performance is a very good argument for Oscar adding a category for Best Child Performance every year, eligible for child actors under the age of 18. Hvenegaard would have been a shoo-in for this had it existed in the 1988 Oscars. It’s a child performance that ranks with the best of them. Pelle is immediately sympathetic and the kid plays it straight, never overacting or losing control of his role.

So is this good? Yeah, but it’s also a one-time film. It’s beautifully and lovingly crafted, but it’s so damn desolate. It’s like a suicide note on celluloid.

Why to watch Pelle the Conqueror: It’s the only Best Actor nomination in Max von Sydow’s incredible career.
Why not to watch: Nothing good happens to anyone.