Oh, Mickey, You're so Fine 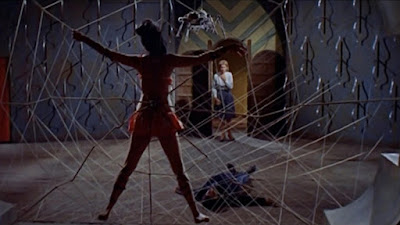 I’ve watched a lot of movies for this site. I’ve seen some things I can’t unsee, I’ve been introduced to movies I have loved that I would never have watched, and I have seen some terrible cinema. That said, it’s been a long time since I have seen a movie as powerfully stupid as Bloody Pit of Horror (or Il Boia Scarlatto, if you prefer the Italian). This movie is kind of an Italian version of a “roughie”; it exists so that Mickey Hargitay can perform weird tortures on scantily clad women.

Bloody Pit of Horror has the thinnest veneer of a plot to string it together. A writer named Rick (Walter Brandi), his publisher Daniel (Alfredo Rizzo), his secretary Edith (Luisa Baratto), and a number of other people are driving through the countryside looking for a place to take pictures to serve as the covers for Rick’s horror novels. They come across a castle that appears to be uninhabited, so they break in to take pictures of scantily clad women being harassed by ghouls and skeletons.

What they don’t know, and what we have learned from the opening, is that this castle was, years previously, the home to the Crimson Executioner, a sort of Spanish Inquisition figure who went rogue and started torturing women for his own twisted reasons. The castle is now occupied by a former actor named Travis Anderson (Mickey Hargitay), who has moved here to get away from the rest of the world. He initially objects to these people using his castle for the purpose of taking lurid photos, but relents when he sees Edith. It turns out that once upon a time, he and Edith were engaged.

Regardless, he decides to let them take their photos, but warns them not to enter the dungeons. Of course, they end up going to the dungeons, and all hell starts to break loose. Soon, people are dying on the photo shoot, and soon enough, it’s evident that the Crimson Executioner has returned. Naturally, the Crimson Executioner is really just Travis Anderson who is capturing people and killing them in various ways. That’s the whole movie—it’s all a setup for Travis to chain up women and poke at them with knives, hot oil, and other implements of torture.

I’m not kidding when I say that this is a really dumb movie. When the first person dies (he has a block with knives poking out dropped on him), everyone decides to stay and keep shooting pictures. No one things to alert the authorities or contact medical professionals. They just cover him with a sheet and keep going. Later, when a couple of them discover one of their models killed inside an iron maiden…they decide not to tell anyone.

The tortures are ridiculous as well. One of the characters (honestly aside from hair color, the women are indistinguishable and the men don’t even have that benefit) is strapped to a giant spider web (see the picture above). Anyone finding her will need to reach her without touching the various strands of webbing in the room, which are connected to crossbows. Meanwhile, our victim is slowly being menaced by a weird, papier-mâché spider that allegedly has poison in its claws. When it touches her, she’ll die. So Rick starts to crawl under the wires to get to her, but of course is too late. The second she is touched, she dies, and at that moment, Rick just…rolls out from under the wires and walks up to her. If he’d done that 30 seconds earlier, he’d have saved her life.

It’s all just so ridiculous. The tortures are like some weird incel fantasy about hurting girls and maybe seeing boobies. It plays like a 12-year-old budding sadist trying to describe what sex is like. One of the torture devices is a hanging cloth dummy with needles? knives? spikes? sticking out of it. They might be poisoned. Travis/Crimson/Mickey keeps trying to get one of the women to embrace it. Meanwhile, Rick is fighting with Travis’s assistants/torture helpers, who are dressed like the French Navy. Their fist fights resemble, and I mean this pretty literally, Captain Kirk fighting Gorn, but instead of that classic Trek music, it’s light jazz playing in the background.

Truthfully, I didn’t hate Bloody Pit of Horror. But it’s really, really dumb, and not in a good way.

Why to watch Bloody Pit of Horror: Where else are you going to see Mickey Hargitay?
Why not to watch: It is powerfully stupid.