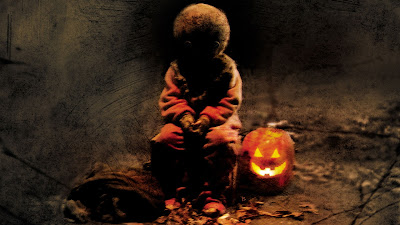 Why are so many horror movies anthologies? I think the reason is that it’s easy enough to work out a shock ending or a couple of good scares in a few minutes without needing the audience to invest too much in the actual story. It’s the same reason that roller coasters don’t go on for 10 minutes. It’s possible to create something that gives the audience a quick thrill and then moves on. This is the downfall of a lot of horror anthologies. It’s the strength of Trick ‘r Treat, though, for a lot of reasons.

What I mean is that most anthologies give us a framing story that appears at the start and end, and usually between the individual stories as well. That’s not the case with Trick ‘r Treat. While there are long pieces of the film that do follow a particular story, all of the stories are intertwined in minor ways. We see something in the first story, and then see it from a different perspective in the next. We see the main character of one story in the background of another. So, all of the stories are tied in the sense that they take place I the same town and on the same night, but are also completely individual. As usual, I’ll break these stories down individually.

There’s a small framing story that concerns the basic set-up of the film. Emma (Leslie Bibb) comes home with her husband Henry (Tahmoh Penikett) from the Halloween festivities, and Emma has had more than enough. She starts taking down the decorations in their yard, including blowing out a Jack-o’-lantern, which is a no-no on Halloween. This is observed by Sam (Quinn Lord), a young child who serves essentially as the spirit of the day for the film (“Sam” being short for Samhain). When Henry comes down to investigate what Emma is doing, he finds her sacrificed and added to the decorations.

While the stories do intertwine and we’ll get moments of each story as they all play out in front of us, the four stories generally run this way:

Charlie (Brett Kelly, immediately recognizable as the kid from Bad Santa) is stealing candy and vandalizing pumpkins. He encounters his principal, Steven Wilkins (Dylan Baker), who is also a secret serial killer. Principal Wilkins decides that Charlie has broken too many of the rules of Halloween and kills him, but then has trouble disposing of the body because of constant interruptions from his son (Connor Levins) and his next-door neighbor, Mr. Kreeg (Brian Cox!).
Rhonda (Samm Todd), an autistic girl, is set up for a prank by a group of other kids. The prank involves a local legend about a bus driver who, at the insistence of a group of parents, kills off a bus filled with eight kids who are severely autistic. When the prank goes bad, it turns out that there might be some truth to the legend after all.
Laurie (Anna Paquin!) is nervous about her “first time” while at the local Halloween festivities. As she looks for that special someone, she is pursued by a serial killer dressed as a vampire who has already killed that evening. Of course Laurie might not be as helpless as she looks.
Last but not least, Sam breaks into the house of Mr. Kreeg, who doesn’t really keep Halloween the way he should. As it turns out, Mr. Kreeg appears to have been the bus driver from the earlier story as well as being the neighbor of the serial killer principal.

I don’t always love anthology films. The stories end just as they are getting interesting, and often, the connection from one story to the next is nebulous at best. That’s not the case with Trick ‘r Treat, which manages to keep all of the stories active for a good portion of the film. It’s done in not so subtle ways, but in ways that are entertaining. We see in the first story that Mr. Kreeg yells for help from Principal Wilkins. Later, we see that scene from inside Kreeg’s house and we learn exactly what he needed the help for.

Trick ‘r Treat wins on a lot of fronts. The stories are a lot of fun and don’t take themselves too seriously. Better, they manage to tell entire stories in their relatively short running time. The fact that there aren’t specific “ending” moments for each of the stories before we move on also helps, because it helps make the movie feel like a completely connected story rather than four intertwined tales.

The cast doesn’t hurt, either. While most of the actors here are good, having names like Dylan Baker, Anna Paquin, and Brian Cox goes a long way toward lending this a great deal of gravitas. It’s always fun when people we think of as serious actors are in goofy little horror shorts. It seems like something that was a great deal of fun to work on.

Trick ‘r Treat is considered a modern horror classic, and I get it. It’s not particularly scary in any respect, but it’s really entertaining in every frame. It doesn’t play up the comedy, but it’s clearly there. It’s roller coaster scary, which is my favorite sort of scary movie.

See this if you haven’t. After all, Halloween is coming, and if nothing else, you should know the rules.

Why to watch Trick ‘r Treat: This is surprisingly twisted and weird.
Why not to watch: The first twist really doesn’t work.