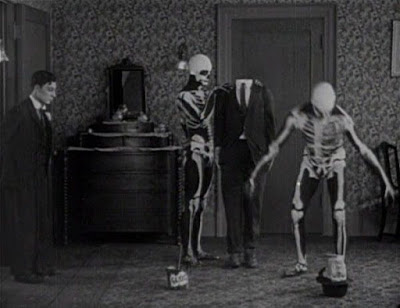 If you want to talk about silent movies, I’m much more likely to want to talk about comedies than any other genre. The reason for this is simple: a lot of silent comedies still work in the sense that they are still funny. That’s simply not the case for a lot of other silent genres. The dramas are more melodrama than drama, for instance. But a guy falling on his hinder is still just as funny when it’s soundless as when we hear the thump. When it comes to that, Keaton was among the best of them. I’ve seen enough Keaton to know he’s my favorite of the silent comedians, but until recently, I hadn’t seen The Haunted House.

Truthfully, while this is classified as both a comedy and a horror movie, it’s really just a comedy. In fact, nothing in the remotest way resembling horror appears for at least the first half of the running time. Essentially, Keaton is a bank teller who, through a series of misadventures involving a pot of glue, ends up looking like he tried to rob the bank. In fact, it was the bank manager who planned the heist, and then planned to hole up in an abandoned house rigged to appear haunted.

That’s the basic premise, but the actual execution decides to do a great deal more than just that. As the teller runs away from certain arrest, a troupe of actors is booed off the stage and pelted with vegetables while performing Faust. They, dressed as demons and other ghoulish critters, also show up at the same house where the teller runs to and that has been set up to appear haunted. Thus, the entire back half of the film consists of the bank teller running into various people dressed as ghosts, devils, and whatever else.

Truthfully, there’s a reason I hadn’t seen this before now. It’s not that The Haunted House is bad; it’s that it simply isn’t very good. Some of the sight gags work, and Keaton was always a master of doing the same thing multiple times in multiple ways to get continued laughs out of the same basic premise, but things get stale here. There is a trick staircase that turns into a slide at the flip of a switch, for instance. That’s funny once or twice, but it happens over and over again, and it also happens predictably. Once you know that this is what is going to happen to the staircase, you can pinpoint to the nanosecond when it’s going to switch from stairs to slide.

The main problem here is that the second half of the film, the part that takes place in the haunted house itself, doesn’t really work in terms of the plot that has been set up. There’s no clear reason for all of these people to converge on the same place, for instance. There’s no clear reason for the actors to remain in their costumes or to attempt to scare the bank teller except that this works to create an extra laugh or two. The laughs aren’t really worth it, to be honest.

I didn’t know that I would ever say that there would be a time that watching Buster Keaton pratfall didn’t always work for me, but the truth is that, for as short as it is (The Haunted House runs less than 25 minutes), this movie is incredibly repetitive. We get a lot of the same pratfalls over and over and very few of them are surprising. Keaton’s strength as a comedian was to be surprising and startling, so when he’s not, it’s a disappointment.

That being said, the fact that this is so short means it’s still worth seeing. You’re not committing to much by watching it, and for all of its flaws, it’s still funnier than 90% of the comedies made today.

Why to watch The Haunted House: Because it’s Buster Keaton
Why not to watch: It doesn’t live up to his other work.