Films: The Pit and the Pendulum (1991)
Format: Streaming video on Tubi TV on the new internet machine. 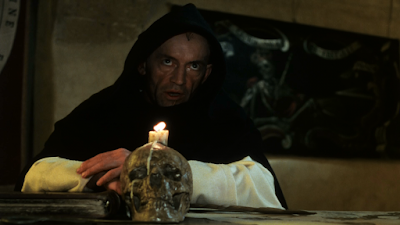 If you’re going to make a horror movie, you could do a lot worse than going with a story or two from Edgar Allen Poe. Many of Poe’s stories are incredibly short, which allows them to be easily expanded or combined into narratives that cover a lot more ground then the original stories. Roger Corman figured this out, often adapting multiple stories in the same film. In the case of The Pit and the Pendulum from 1991, frequent Stuart Gordon collaborator Dennis Paoli went with this model. He built up an entire world around the base story and added in an aside that clearly riffs on The Cask of Amontillado for good measure.

We’re going to be right in the middle of the Spanish Inquisition for this story, which is accurate to the original story. Not a lot else will be accurate here, but that’s no matter as long as we get both a pit and a pendulum. Our film opens with one of the truly great gonzo horror movie openings, approaching (but never reaching) the staggering opening of Black Sunday. In this case, Grand Inquisitor Torquemada (Lance Henriksen!) has a body exhumed from a crypt and put on trial. Torquemada accuses the skeleton of heresy, strips the family of all lands and titles, and has his torturer Mendoza (Mark Margolis) whip the skeleton. Naturally, the skeleton falls to pieces. The bones are picked up, ground into powder, and poured into a hourglass. Honestly, it’s one of the greatest openings I’ve seen in a long time.

We doodly-doo to the film’s present and we are introduced to Maria (Rona De Ricci) and her husband Antonio (Jonathan Fuller). The two operate a bakery and are clearly wildly in love with each other. Maria is not happy that they couple will be taking their bread to sell at the auto-da-fe, and are thus profiting on the pain and suffering of others. In fact, during the burning of a witch, Maria objects. Torquemada is immediately entranced by her beauty and accuses her of witchcraft. Maria is arrested. Antonio tries to bribe his way into the prison to rescue her and is captured as well.

We see a bit of Maria’s torture and questioning, which naturally involves a great deal of nudity as well as our introduction to Stuart Gordon favorite Jeffrey Combs. Maria is eventually tossed into a cell with Esmerelda (Frances Bay), who actually is a witch and teaches Maria to more or less go to a happy place during torture. Torquemada’s obsession with Maria increases, which causes a number of issues between him and his cadre of torturers and priests.

There’s also an odd little cul-de-sac in the middle of the film where an emissary from the pope comes to halt the Inquisition. This cardinal (Oliver Goddam Reed!) shows up and is almost immediately eliminated by Torquemada, who doesn’t want to give up on his fun. If you think based on the opening paragraph of this review that the cardinal drinks a bit of Amontillado and ends up walled up in a catacomb, well, you’d be right.

Eventually, we get to the title tortures that happen after Torquemada believes he has murdered Maria and needs to get rid of Antonio. The third act is where the film starts to go a bit off the rails in a few places. A lot of what happens at the end could be seen (and probably should be seen) as the splintering sanity of Torquemada. There are some events that happen here that are best explained as happening in his mind and not in the real world. The problem is that there are a number of events that must be taking place in the real world and that beggar my willing suspension of disbelief. I’m happy to accept the sinful equivalent of stigmata, for instance, in a movie like this, but having a baker suddenly a swashbuckling sword expert able to hold off a dozen or so experienced guards is just too damn much.

Beyond that, though, this was a lot more entertaining than I expected it to be. The Pit and the Pendulum is as transgressive as I expect a movie written by Paoli and directed by Gordon to be. It’s not even the tortures that get us there, or the expected and demanded nudity of poor Rona De Ricci. No, the transgression here comes entirely from Torquemada, who tortures himself as well as others. Much of the film is essentially a real-world expression of his own twisted psyche, and viewing the film in this way not only provides a certain overall sense to the film, it explains a great deal of the perversity.

It needs a better third act, but getting to the end is at least an interesting experience. It’s vicious and unapologetic. I’m not sure I can call this film fun like many other Stuart Gordon movies, but it has the same warped sensibilities. It’s kind of fascinating despite itself.

Why to watch The Pit and the Pendulum: It’s transgressive as hell.
Why not to watch: Parts of the third act are ridiculous, and not the supernatural parts.

Email ThisBlogThis!Share to TwitterShare to FacebookShare to Pinterest
Labels: horror, romance, Stuart Gordon, The Pit and the Pendulum