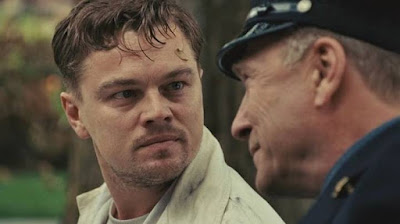 It’s worth remembering sometimes that Martin Scorsese finally won a Best Director Oscar for a movie that was a remake. I say this because Shutter Island feels very much like a remake. It’s not; it’s based on a Dennis Lehane novel, but it genuinely feels like a remake of another film. I’ll get to that under a spoiler tag in a bit. I don’t want to spoil this (or the other movie) for anyone who has only seen one of them.

It’s also worth saying that being Martin Scorsese will have some particular perks beyond being an acclaimed film director. For instance, you’ll get your choice of anyone you want to work with. This film features performances by Leonardo DiCaprio, Mark Ruffalo, Max von Sydow, Ben Kingsley, Michelle Williams, Patricia Clarkson, Elias Koteas, Emily Mortimer, Jackie Earle Haley, Ted Levine, and John Carroll Lynch. It’s one of those movies that makes you wonder why there isn’t an Oscar for best ensemble cast.

Federal Marshals Teddy Daniels (DiCaprio) and Chuck Aule (Ruffalo) are sent to Shutter Island, an Alcatraz-like island off the coast of Boston that serves as an institution for the criminally insane. Their task is to investigate the disappearance of a patient named Rachel Solando, and things immediately start to get strange. Teddy meets with the main staff of the hospital, including doctors John Cawley (Kingsley) and Jeremiah Naehring (von Sydow), who immediately gains Teddy’s ire for being German. We learn that Teddy was at the liberation of Dachau. He also begins to suffer from migraines.

Through a series of events—a massive rainstorm primary among them—Teddy and Chuck are forced to wear orderlies’ uniforms and lose access to everything of their own, including their own cigarettes, and they are forced to stay on the island. Teddy has disturbing dreams of his wife Dolores (Michelle Williams), who we learn was killed by an arsonist named Andrew Laeddis (Elias Koteas), who may be on the island as well. As Teddy digs deeper into what has happened to Rachel Solando, it seems that everyone on the island knows not only exactly what has happened, but knows everything about him as well.

So let’s put most of the rest of this discussion under a spoiler tag.

The movie that Shutter Island reminds me of to an almost disturbing degree is Identity. While there are clearly a lot of differences and this is a much classier production in terms of general talent and budget, there’s a great deal that the two movies have in common.

It’s also worth noting that I guessed about 75% of the ending here. I didn’t get everything right because I don’t know that we really get enough information to get everything by the time the end shows up, but we get enough that I made some educated guesses that honestly weren’t that difficult. It’s clear right away that events and everyone at the facility are essentially conspiring to divest Teddy of all of his possessions and points of identity. This can only mean that Teddy is being set up to become a new inmate in the facility or that he already is one in some respect. I guessed right, and if you’ve seen Identity, you know how I guessed.

In that respect, Shutter Island is a bit disappointing. I was led to believe that this was going to be a twisted and devious thriller, the sort of film that leads to a shocking conclusion that we didn’t see coming, and that absolutely didn’t happen for me at all. It’s well acted and if you’re not really paying close attention to it, I would imagine that the big reveal is a shock. But I was absolutely prepared for it, so it didn’t work that well on me.

Shutter Island is a fine film, but I think it’s one that works better for an audience that is less savvy on narrative and movies in general. I’m guessing I’m not the only person to get a big chunk of the ending long before the narrative gets us there.

Why to watch Shutter Island: It feels like a genuine change in style and focus for Martin Scorsese.
Why not to watch: It also feels like a remake in a lot of ways.