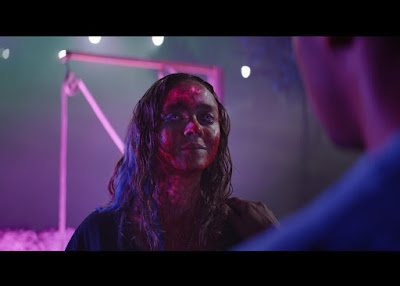 It’s rare when I see something based on a story or book that I know. Most of my reading tends to be non-fiction these days. Color Out of Space is based on the H.P. Lovecraft short story The Colour Out of Space, a story that clearly influenced a film like Annihilation as much as that film was influenced by Stalker. It might be too much to suggest that any movie that starts with a meteor is influenced by Lovecraft’s story, but there are echoes of it in a movie like Slither as well as the second story in the original Creepshow.

This isn’t the first version of the story filmed. There was a version produced about a decade ago as well as one from the late ‘80s starring Claude Aikens and Wil Wheaton (called The Curse). That version is a great deal more accurate to the original story than this one, but it also suffers from having been made in a year when there weren’t really effects that could do the story justice.

In Lovecraft’s story, a meteor lands in the field of a farmer. The meteor contains some horrible mutagenic creature from the deep beyond of space, and it gets into the water supply of the farm, mutating the animals and crops. Eventually, all of the people on the farm become infected and transformed by the thing from space. As I recall, in the story, pretty much everyone in the family ends up essentially sacrificing themselves by diving in the well.

This version of the story has the basics in place. We’re introduced to the Gardner family by first encountering Lavinia (Madeliene Arthur), who is performing a Wiccan ceremony intended to cure her mother’s cancer. The ceremony is interrupted by the arrival of Ward Phillips (Elliot Knight), a hydrologist coming to check the water tables in the area. We are eventually introduced to the rest of the family—father Nathan (Nic Cage!), mother Theresa (Joely Richardson), older stoner son Ben (Brendan Meyer), and younger son Jack (Julian Hilliard). Theresa is indeed recovering from cancer surgery and is still attempting to work while Nathan, having moved the family to his late father’s farm, attempts to raise crops and alpacas.

That night, the meteor we need to kick off the bad stuff hits in the front yard of the house, and almost immediately, things start going haywire. The meteor is a strange pinkish color (in the story it was a color that had never been seen before, so a sort of neon fuschia isn’t a terrible choice), and, after a day or two, suddenly vanishes. Not long after this, people start acting strangely. Jack believes he is communicating with someone who lives in the well while Theresa, involved in making dinner, slices off a couple of her fingers. Meanwhile, the squatter who lives on the family land (Tommy Chong!) seems to be disintegrating mentally a little more than normal as well.

While Nathan takes Theresa to the hospital, all hell breaks loose on the farm. Benny, trying to take care of the alpacas, loses all track of time. The electronics stop working, as do everyone’s cell phones. Eventually, Nathan comes home with Theresa, and the farm begins to mutate. The alpacas are essentially compressed into one giant alpaca-y mass, much like the sled dogs in Carpenter’s version of The Thing. The family dog vanishes as well, and that color keeps showing up in more and more menacing ways.

Color Out of Space is very much a body horror film. There are some disturbing moments here that aren’t horrifying sci-fi effects. Theresa slicing off her fingers certainly counts as one of these. More disturbing is Lavinia’s slide into desperation, which involves her carving pentagrams and Wiccan symbols on herself with an X-Acto knife. There are naturally some disturbing science fiction effects as well.

There’s a lot to like with Color Out of Space. One thing I like here is that this is just a terrible thing that happens. There is no message here beyond the story, no moralizing or waxing rhapsodic about some deeper idea. It’s just a dreadful event that happens to this family, a force of nature beyond their control.

This is somewhat tempered by the typically over-the-top acting of Nic Cage, who evidently just can’t help himself anymore. There are moments where Cage is good and appropriate (early on and late), but in the middle of the film, a lot of what he is asked to do is to sell what is apparently a splintering sanity. Cage does this by simply being crazy.

Despite this, I found this an interesting watch. There is a terrible sense of fatalism here, of the characters being locked into a destiny beyond their control for no other reason than living in the wrong house. There’s a bit of nihilism in that view, but no more so than people in the path of a hurricane or tornado can arrange for themselves a happy ending. Color Out of Space is unrelentingly bleak, but so too was the story from whence it came, so in that respect, it’s right in line with Lovecraft’s source material. That it takes some license with the original story is of no matter—the heart of the story is here, and this update works very well.

Why to watch Color Out of Space: It reaches for the spirit of Lovecraft’s story as much as it can.
Why not to watch: Nic Cage can make things hard to take seriously.