Tied to the Land 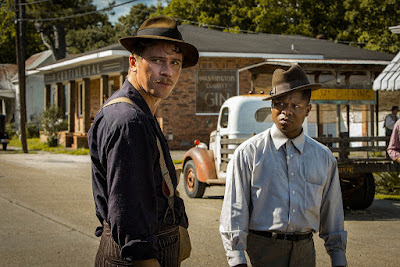 I have started to watch Mudbound a couple of times before but have never really gotten anywhere with it. Now, at a point where I have fewer than a dozen movies on my Oscars list, I can’t continue to avoid it. That’s especially the case when of the 11 movies I have left, nine are missing, exist only in archives on the West Coast, or are only partially available at best. I wasn’t looking forward to this. It’s a hard movie to watch in the best of cases, and it’s not one I figured I would enjoy much. This is a movie about racism and evil.

As much as I would love to tell you that Mudbound is a story about a Black sharecropper family living on the land of white farmers, that would only be the basics of the story. This is a story about privilege. How is this so? Because it’s a story about a poor white family on a farm in Mississippi during and after World War II working a hardscrabble farm. There’s nothing about these people that scream privilege, but compared with the sharecroppers on their land, the privilege is real and palpable in every frame.

Mudbound may well be a great movie, but it’s not a pleasant one by any stretch of the imagination. This is a brutal film where not much happens for anyone that is good. It’s pain and anger and brutality, and not simply because these people are working on a subsistence farm in the middle of nowhere. Actually, at the end, there’s potentially a happy ending for a couple of characters, but you’ve got to wade through two hours of pain to get there.

I’m not going to go through a great deal of the plot here, because Mudbound is plot-heavy, or at least event heavy. It’s probably better to discuss instead the two families that will make up the bulk of the drama. The white family, the McAllans, have purchased a farm in Mississippi on the insistence of Henry (Jason Clarke) and much to the surprise of his wife, Laura (Carey Mulligan). Also a surprise is that he will be moving in Pappy (Jonathan Banks), his extremely racist father into the house with them. Also showing up eventually is Henry’s younger brother Jamie (Garrett Hedlund). It’s clear that there’s a great deal of attraction between Laura and Jamie in no small part because the marriage between Laura and Henry is essentially loveless.

Working the McAllan farm as sharecroppers are the Jacksons. While there are a number of Jacksons, there are only three who will be of primary interest to us. Hap Jackson (Rob Morgan) is the family patriarch, but there is a sense that his wife Florence (Mary J. Blige) is really in charge of the family. Struggling mightily under the yoke of racist Mississippi in the post-war years is oldest son Ronsel (Jason Mitchell).

Essentially, both Jamie and Ronsel fight in the war in Europe, and both are affected by it. Jamie suffers a great deal from PTSD while Ronsel, we eventually learn, had a long-term affair with a German woman and eventually had a child with her, something best not spoken of in a part of the country under the social influence of the Klan. Eventually, this is going to play into the story, but not really until the third act.

Essentially, Mudbound is, as I said up top, a story about privilege. The McAllans are dirt poor and not much happens that is good for them. Only Jamie might come close to realizing how much better his life and his family’s lives are than those of the Jacksons. Pappy most assuredly would think that his life is harder than that of the sharecroppers and he’d resent them for existing. And, of course, this is going to end up taking a horrible toll on both families.

Mudbound is a hard film to like, honestly, but not a hard one to respect. It’s also one where I think some of the nominations were misappropriated. Mary J. Blige is very good in this, but I’m not sure warranted the nomination in a supporting role. Rob Morgan did, though. I think the intent was for Florence to be the conscience of the film, but it’s really Hap who seems to be the moral center of everything, more or less. I could see Jason Mitchell nominated as well, since it is Ronsel who is the most forward-thinking, or at least the most modern in his demeanor. He’s “problematic” for his time, of course, but he’s also the one character with whom the audience will clearly identify.

Anyway, this is in the rearview mirror, and I’m okay with that. I’m happy to have seen it, but probably will not see it a second time.

Why to watch Mudbound: Some peak performances by some very good actors.
Why not to watch: Boy, but it’s ugly.