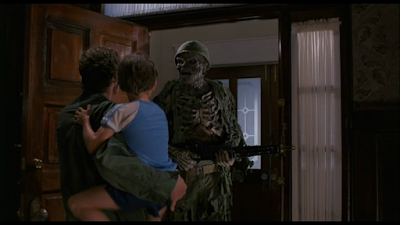 People’s careers are funny things. In 1985 or 1986 (depending on the website you check), the movie House was released. This is not the bizarre Japanese movie Hausu nor the television show starring Hugh Laurie. This is more or less a straight horror movie, although there’s a great deal of comedy here. It’s also a movie that has a rather surprising television pedigree. It stars William Katt, who a few years previously had starred in “The Greatest American Hero.” In smaller roles, it has Richard Moll from “Night Court” and George Wendt from Cheers.

There’s a lot here that isn’t really explained that well. The basic story is that horror author Roger Cobb (Katt) has retreated to the house of his aunt where he grew up. His aunt hanged herself in the house previously and while Cobb was expected to sell the house, he’s decided instead to use the house as a base of operations for his next book. That book is planned to be not another horror novel, but the story of his experiences in Vietnam. Not only is he having difficulty with getting anything started on the book, but he’s also having some odd experiences in the house itself.

We also learn that Cobb is recently divorced or at least separated from his wife Sandy (Kay Lenz). And it takes us a surprising amount of time to discover that their child is missing, as in he was in the yard one moment and then he was simply gone. Once would think that this might be central to the plot of the movie, and while this does get brought up form time to time, a missing child is a substantially smaller plot than you might expect.

Anyway, Cobb starts hearing things around the house and spots visions of his son as well. One night, innocently opening a closet door, he is attacked by a gigantic demonic creature. He spends a good deal of the time attempting to re-establish that link. He does eventually seem to get in touch with this wife, who turns out to instead be a sort of shape-shifting demon. The second act of House has very tame gore effects, a movie like this one seems to be much more likely to trade in gore, but this is very basic stuff.

We’re also going to get some flashbacks to Cobb’s time in Vietnam. It’s here that we meet Big Ben (Richard Moll), who is filled with bluff and bluster, but also seems to have the strength to back up a lot of his bravado. Over the course of the film, we get more and more of the flashback that shows us what happened to Ben, and why he might be one of the unquiet ghosts of Roger Cobb’s reality.

I’m serious when I say that a great deal of this movie is completely unexplained, though. For instance, Cobb has a sexy neighbor named Tanya (Mary Stavin) who just shows up to swim in his pool. There’s an awkward scene between them as she more or less flirts shamelessly with him while he tries to hide the body of a creature that has been attacking him (and might still be alive…or undead). Tanya shows up later, and we think this is going to be an awkward date, but instead, she leaves her son with Cobb and runs off.

House feels like an homage to a couple of 1980s-era horror films in a lot of ways. Parts of it feel like a throwback to Evil Dead and a precursor to Evil Dead II. There are also some connections to Poltergeist with the missing child who is somehow still making his presence known in the house. There’s definitely something that House wants to say, but it keeps getting in its own way instead of just saying what it wants.

That’s the main issue here. House definitely wants to be a comedy, and there are some comedic moments here. One of the better ones involves Cobb and his neighbor Harold (George Wendt), who is convinced that Roger has lost a few marbles. Cobb, wanting a witness to what is happening, tells Harold that there is a large raccoon trapped in a closet, and he wants Harold to help him kill it. Instead, it’s the gigantic demon creature, and the shock of Harold’s reaction is pretty great. There are a few other funny moments here and there, but this doesn’t really feel like a film that should be a comedy at all.

I mean, is this the story of a man dealing with his traumatic past as a Vietnam veteran? It kind of wants to be—that’s the story that we get in the flashbacks, it’s the story that Cobb is writing about, and it seems to be the motivation for the Ben character. But we’re never really told why Ben has this ability to show up from the past, or has the ability to affect the real world. It just…happens without any explanation.

That’s probably the biggest issue here. Nothing is explained. Why is there some sort of vortex to another dimension in Cobb’s late aunt’s closet? Because there is. Why did a demonic/cartoonish version of Cobb’s wife show up and start attacking him? Because she does. Why does Ben have the ability to suddenly appear in the real world? Because he does.

House gets some stuff right and about an equal amount of stuff wrong.

Why to watch House (1986): It’s entertaining if nothing else.
Why not to watch: It feels like a greatest hits of a lot of ‘80s horror movies.