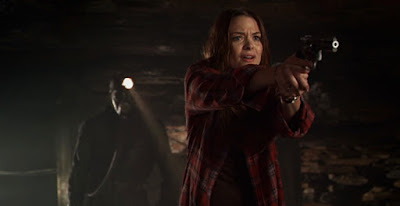 It’s not too long into the remake of My Bloody Valentine that you figure out this was a movie made for 3D. We learn about a mine collapse in 1997 in a small mining town. Six men are trapped, but when the rescue team arrives at the scene, there is only one man, a comatose Harry Warden (Richard John Walters), still alive. The other five men clearly didn’t die in the cave-in. They were brutally murdered by Warden with a pick axe specifically to conserve oxygen.

One year later, Warden wakes up from his coma and slaughters most of the hospital staff, leaving a calling card of a human heart in a candy heart. He then heads back to the mine where a group of young people are having a party (this is very much the plot of the original film). It’s here that we learn this was a 3D movie. One partygoer plays a prank and then is killed by Harry Warden hitting him in the head with his pick. The victim’s eye is what comes out of the screen at us. It’s a good taste of what is to come.

Anyway, what we learn is that there are only a few survivors from that fateful second murderous rampage. Those survivors include Tom Hanniger (Jensen Ackles), son of the mine owner; his girlfriend Sarah (Jaime King); local Axel Palmer (Kerr Smith); and his girlfriend Irene (Betsy Rue). Cut to 10 years later. Tom has returned to town because of the death of his father. He’s in town to sell the mine and walk away from the town forever. Axel has become the local sheriff and has married Sarah, but is managing to have an affair with Sarah’s coworker Megan (Megan Boone). And it’s Valentine’s Day again, and, well, you know what’s going to happen, right?

You’d be right. Harry Warden, never definitively killed to the satisfaction of most of the people in town, appears to have returned to start killing again. We’ll get a series of brutal deaths by pickaxe, including Irene and a number of people who were important in town ten years earlier, like the previous sheriff (Tom Atkins). It’s as if the Miner (played by Chris Carnel but never seen outside of the costume) is back for revenge and no one is safe.

My Bloody Valentine has exactly one thing going for it: body count. There are plenty of unpleasant ways to die, but based on this movie, pickaxe isn’t one of the nicer ones. My Bloody Valentine trades on gore from its opening several minutes and continues through the entirety of the film. The body count is something like 30, most of them in the first 15 minutes or so of the movie, with the rest being extremely graphic. Actually, all of them, both the ones we see and the ones that are implied, are incredibly graphic.

There’s also standard horror movie nudity here if you want it. It all comes in one scene, but it’s there for a long time. Essentially, if you’d like to spend time watching the past-her-prime high school cheerleader who ignored you walking around completely starkers in a parking lot before being pickaxed, well, we’ve got that for you here.

I am, perhaps, being too hard on My Bloody Valentine. It does exactly what it sets out to do—gross out the audience with body parts and violent deaths and offer a jump scare or two. That’s as high as this movie aims. It’s not trying to freak people out existentially or elicit any terror. It aims for straight jump scares and gross-outs, and that’s it. I kind of respect its lack of pretension. It’s not pretending to be anything more than a movie for gorehounds to watch and enjoy.

Where My Bloody Valentine fails is in the movies it cribs from. The way the third act plays out steals from better movies shamelessly. I’ll explain this in a spoiler.

What we eventually learn is that Harry Warden is dead, of course. He was killed off by the town elders and buried in a shallow grave in the middle of the nearby forest. Of course, that grave has been disturbed by whomever is taking the role of the Miner now. It’s worth noting that despite having been buried for 10 years, the Miner’s outfit and gas mask are undeteriorated.

Anyway, the two people we have who could be the Miner are Axel and Tom. They finally confront each other (with Sarah in the middle) and we have it revealed which one of them it is. It’s Tom—and all of the moments before this we have seen with Tom and the Miner in the same place are Tom’s psychosis. It’s mildly reminiscent of a film like Identity and virtually identical to a film like High Tension.

That said, I offer bonus points for not killing off the one Black character (Edi Gathegi)

I can’t honestly imagine that My Bloody Valentine is anyone’s favorite movie, but if you like gore, ripped out hearts, and cheesy 3D, it’s here for you. I didn’t hate it, but I can’t imagine wanting to watch it a second time.

Why to watch My Bloody Valentine (2009): Ramped up gore and a high body count.
Why not to watch: It steals from other, better films.