Get Your Papers in Order 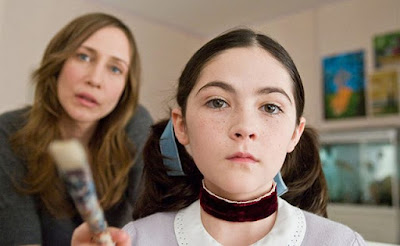 Orphan came recommended to me by a friend. It’s a movie I have known about in a vague sense for some time, mostly because in the minds of a lot of people, it gets confused with The Orphanage from a year or two before this one. I frequently had to explain to people that no, I was not talking about the movie where some people adopted a strange and disturbing child, but a Spanish-language movie that involved a haunted orphanage. So, in a sense, I kind of avoided Orphan because I was tired of having explain that it wasn’t the movie I was talking about.

Anyway, Orphan is classified as a horror movie for the same reasons that something like The Silence of the Lambs, Hard Candy, We Need to Talk About Kevin, and Fear are classified as horror movies. All of these movies take place more or less in the real world with plots that could legitimately happen in that real world, but that are horrific. It’s what I would typically call a “thriller” more than anything else, but since it’s the sort of film that frequently gets put on lists of horror movies, well, here we are.

So we start with the rather bloody and terrible miscarriage of Kate Coleman (Vera Farmiga). The stillborn daughter would have been the third child of her and her husband John (Peter Sarsgaard). They decide instead that they will adopt a third child, and rather than adopting an infant, they decide on an older child. They spend time at an orphanage, being led around by Sister Abigail (CCH Pounder). John wanders off and encounters Esther (Isabelle Fuhrman), a precocious 9-year-old, who is soon after adopted by the family. Daughter Max (Aryanna Engineer) takes to Esther right away, while older son Daniel (Jimmy Bennett) does not.

It’s soon evident, though, that Esther is very different. She is not merely precocious in many ways, she has a particular knowledge that she shouldn’t really have at her age. She catches Kate and John in flagrante, and seems to know exactly what was going on. She also demonstrates a certain cold-bloodedness, hurting a classmate who has bullied her and killing a pigeon that Daniel accidentally wounds.

Soon enough it is evident the Esther is not so innocent and is very much a “bad seed.” She is violent at times, vindictive, and, when provoked or threatened, murderous. She soon decides that Kate is a rival and begins something like a campaign against her adoptive mother, threatening both Max and Daniel into silence. In danger of being outed by Sister Abigail, Esther kills her, and enlists Max in the cover-up to keep her quiet. And from there, her psychological war against her mother only intensifies. Kate fights back as best she can, but information comes out about the couple’s past. First, we learn that Kate battled alcoholism. Max’s deafness stems from an accident where she fell into a frozen pond while Kate was passed out. We also learn of John’s past infidelities, another potential wedge between them, and information that Esther finds and turns to her own advantage.

There is, of course, a big twist that happens in the last 20 minutes or so. It’s an upsetting bit of celluloid and I won’t spoil it here. I will say, though, that it wasn’t a great deal of a shock to me. I can’t say that I fully predicted what was going to happen, but I also wasn’t terribly surprised by it. That, honestly, was a bit of a let-down for me.

There are definitely things to like with Orphan even if the twist at the end didn’t entirely work for me. I do enjoy the fact that “Max” is short for Maxine, a name that has sadly gone almost entirely out of fashion. I say this as someone who has a daughter named Maxine, so I admit that I’m partial to that. It’s also very well acted. I don’t have a definitive opinion on Vera Farmiga. I don’t honestly like or dislike her. Isabelle Fuhrman is the standout here. It’s a good performance in general, but a very good one from a 12-year-old in a psychologically difficult role.

I don’t always have a real problem with films that are highly transgressive, and Orphan is very much that. I think perhaps it’s the nature of the transgression here that bothers me. It’s not the film’s fault that I find what is going on here to be really unpleasant. It’s that sort of film. What is going to strike me as horribly unpleasant is, for someone else, the thing that makes the movie worth watching. In that respect, is probably a little better than I think it is.

Why to watch Orphan: It’s a new take on a story you’ve at least heard of before.
Why not to watch: The twist isn’t that hard to figure out.