I’ve been saying for some time that I’m about done with my Oscar lists, and I think I’m about as done as I can be. Of the nine movies I haven’t seen, most are missing, fragmentary, or exist only in some cinematic vault on the other side of the country. Oh, I might watch the scraps that remain of those I can, but I think I’m done with full movies on these lists until the next Oscars…whenever that might be. So here I am, essentially done, and just in time for the next update to the 1001 Movies list. 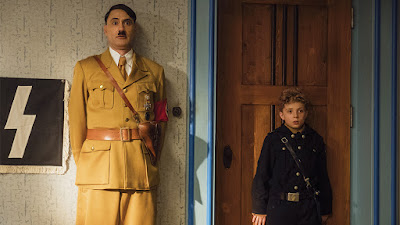 So, I saved Jojo Rabbit for “last” for no reason other than that I didn’t want a complete slog to end this part of this journey. Jojo Rabbit is at least partially a comedy. It’s a pitch black comedy, surely, but a comedy nonetheless. Our hapless hero is Johannes “Jojo” Betzler (Roman Griffin Davis) a 10-year-old German kid in the last days of World War II. Jojo is a completely indoctrinated member of the Hitler Youth and a fervent Nazi, but doesn’t really have a clear understanding of the party’s doctrines. Jojo’s imaginary friend is a goofy and childlike Hitler stand-in (played by director Taika Waititi) who gives unclear advice to Jojo.

On a weekend retreat for Hitler Youth, Jojo earns his nickname of Jojo Rabbit by refusing to kill a bunny. Ridiculed for weakness, Jojo decides to impress the camp leaders, Captain Klenzendorf (Sam Rockwell), his assistant Finkel (Alfie Allen), and camp matron Fraulein Rahm (Rebel Wilson) by learning to throw a grenade. True to form, it bounces back to his feet and Jojo is scarred in the face and earns a limp.

At home, Jojo discovers that his mother Rosie (Scarlett Johansson) is a pacifist, not a supporter of the Nazi party, and, worst of all in Jojo’s mind, harboring a fugitive Jew named Elsa (Thomasin McKenzie). Not trusting her at first, Jojo eventually warms to Elsa, and demands that she tell him all of her “Jew secrets,” which she naturally makes up out of whole cloth (Jews sleep hanging upside down from the ceiling like bats and grow horns, but not until they are 21), and which he naturally believes completely.

The bulk of Jojo Rabbit is this play between what Jojo thinks is true and his child’s dedication to the indoctrination he has received and what he experiences in the rest of the world. This is an absurdist comedy more than it is anything else, but it naturally goes to some very dark places as well. There’s a lot of Kafka here, and a lot of Joseph Heller. And more than any other movie, this reminds me a great deal of Life is Beautiful.

Jojo Rabbit won the Oscar for Best Adapted Screenplay and scored a few other nominations as well, including one for Best Picture. It allowed Scarlett Johansson to score an odd accomplishment by earning a Best Supporting Actress nomination for this and a Best Actress nom for Marriage Story in the same year. I’d have loved to have seen some recognition for Waititi here. He’s probably not in the film enough to qualify for a supporting role (although, truthfully, he was), and his directing could have been acknowledged as well. This is a very hard balance to get right. The proper response to Nazi ideology as Mel Brooks discovered with The Producers is to point and laugh at it as much as possible. Jojo Rabbit walks that line about as well as it can be walked.

I really want to call out Roman Griffin Davis here, as well as Archie Yates, who plays Jojo’s pudgy friend Yorki. These kids are dynamite. It’s unfair for Oscar to put kids in competition against adults in acting categories, but Yates and especially Davis are absolutely posterchildren for the idea that Oscar should have an award for Best Child Performance. The entire movie hangs on how well Davis can carry off this role, and he does it flawlessly. Yates, in his scenes, is a sort of deadpan comic relief that works because he plays it so straight. For that matter, Thomasin McKenzie is equally good in a role that is also one that could easily become unforgiving.

This is a hard film not to like, but also one that I think it would be hard to watch frequently. There’s a lot of comedy here, but there’s not a lot of laugh-out-loud comedy. It’s dark stuff, and funny because it’s dark. While it does offer a path through the darkness, it’s not always an easy trip getting there.

Do I have complaints? I’d have loved more of Sam Rockwell’s character. Alfie Allen could have been given a lot more to do. And, honestly, I find that Rebel Wilson grates on me, and that was no different here. Still, those are small issues. What I genuinely like here is that Jojo Rabbit takes a lot of risks and makes them work. It never really plays it safe, and I have a great deal of respect for just how many plates Waititi keeps spinning.

Why to watch Jojo Rabbit: This is how you do dark comedy.
Why not to watch: It’s a lot darker than you think it’s going to be.