Who is the greatest early screen comedian? Fatty Arbuckle, scandalized, is all but forgotten. W.C. Fields is revered by some, but how many people who aren’t really serious about film have seen any of his films? Harold Lloyd was one of the greats, of course, but he’s less well-known than Fields. Which leaves us with Chaplin and Keaton. 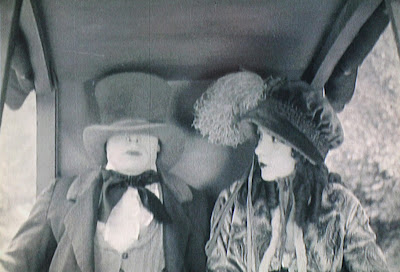 I love Chaplin, but my money’s on Keaton here. His films tend to be much less complicated and tend to serve as a platform for tremendous sight gags. No doubt Chaplin pulled a lot of great gags, too, but his tend to be more in the service of story than Keaton’s. Keaton’s gags are almost pure in that they don’t really matter to the plot; instead, they’re simply as funny as possible. Nowhere is this better demonstrated than in Our Hospitality.

As tends to be the case, the plot here is simple. Young Willy McKay (Keaton) learns that he has inherited an estate somewhere in the antebellum South, so he heads there to claim it. What he doesn’t know until setting out is that his family is half of a legendary feud between the McKay family and the Canfields. In fact, his father killed the brother of Joe Canfield (Joe Roberts) while simultaneously being slain by him. What this means is that Willy is going to find himself on the business end of the revolvers of Joe Canfield and his two sons (Ralph Bushman and Craig Ward). That’s really it.

To add a little spice to the narrative, Willy rides down on the train next to a pretty young lady (Natalie Talmadge), and the two become acquainted. Naturally, she turns out to be the daughter of Joe Canfield, and when she invites Willy to dinner, all hell breaks loose. The Canfields want nothing more than to kill him, but killing him while he is their guest breaks their code of honor, so they must wait until he leaves their house.

This culminates in his desperate flight from the house, a series of misadventures, a long dunking in a river, and a climactic scene involving a huge log, a boat, and a waterfall that really must be seen to be believed. Throughout, there are characteristically tremendous stunts and some screamingly funny gags.

It’s the train ride that I find the most interesting. It lasts for a considerable amount of time, and nothing important happens save that Willy meets the girl, something that could have been handled in a couple of minutes. Instead, we are treated to a series of brilliant jokes, pratfalls, sight gags, and comedic bits. Essentially, this entire episode in the film exists for no reason than to give Keaton a chance to be really, really funny. And he is. No possibility is left unexplored, and he mines everything for its comedic possibility.

What I particularly like about Willy McKay is that he is a quintessential Buster Keaton character. Terrible things and bad luck strike him almost constantly, but he is smart, talented, and resourceful. It’s easy to root for him because his problems are not cause by him, but by other people or simple misfortune.

There are some additionally excellent visual jokes here as well. One of the most entertaining is the fact that Keaton is a good six inches shorter than all of the other men in the film, which puts him at an obvious physical disadvantage. Physically, he’s essentially the same height as the girl, so the two of them are constantly being loomed over by everyone else. 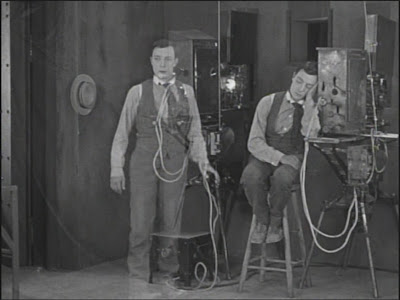 Sherlock, Jr. might now be my favorite Buster Keaton film, eclipsing even the epic The General. While much shorter, there’s so much going on in this film that it almost feels like he had so many ideas that he wanted to put them all in one place.

Our hero (Keaton) is a film projectionist, but he’d like to be more. He’s studying to become a detective. He’s also wooing a young lady (Kathryn McGuire), and finds himself in competition with the local rake and thief (Ward Crane). While he visits the girl, the rake shows up and steals her father’s pocket watch, pawning it to buy the girl a gift. He then slips the pawn receipt into our hero’s pocket, causing him to be booted out of the house and the girl’s life. He returns to his job at the movie theater and falls asleep while screening a movie called “Hearts and Pearls.”

And here’s where the magic really happens. While sleeping, he dreams himself into the film, which has a plot concerning a missing string of pearls, a plot that is disturbingly like what he’s experiencing himself. In his dream, the characters on screen are replaced by the players of his real life drama.

After a series of tremendous gags involving a series of jump cuts on the screen, he enters the screen narrative as the great Sherlock Jr., the greatest living detective. Again, a series of sight gags follow including the most tremendously funny game of billiards ever filmed. Of course, the great Sherlock Jr. solves the crime at hand and saves the fair maiden. Our hero wakes up to discover that in the real world, things are a bit different than they were when he went to sleep.

Again, Keaton uses the basic plot of the film here to include as many gags as he can regardless of how closely these gags track with the rest of the plot. The sequence when he first encounters the film world is a prime example of this. The series of jump cuts have nothing to do with the film being shown in the theater—this set of jokes is there simply because they’re really funny. It’s great to watch him walking down a busy street only to have it change to the edge of a cliff, or see him attempt to sit on a bench only to have it vanish from beneath him a moment later.

It’s the pool game that slays me, though. The two bad guys in the movie within the movie have placed a trick #13 ball on the table. The moment it is jostled, it will explode. What follows is a sequence in which Keaton completely clears the table of all of the other balls without the 13 ball moving an inch. Other balls come within in hair’s breadth of hitting it, but they never do. He pulls off complicated trick shots to sink the other balls without the 13 being struck. Throughout, the bad guys watch him from a safe distance. I can’t comment on how the scene ends without spoiling it, though, and it’s a moment that really needs to be experienced. Surrounding this is a series of additional gags about assassinating the great detective, all of which backfire amusingly.

Sherlock, Jr. never stops once it gets going. Keaton is like a comedy Energizer Bunny, throwing everything he can think of at the audience in the hope that something he does will get them to laugh. The gamble pays off, because there are plenty of things here that virtually anyone would laugh at. When watching comedies, even things that are really funny don’t typically make me laugh out loud, but Sherlock, Jr. does.

More to the point, Keaton makes me laugh. He makes me laugh a lot. A great deal of his oeuvre plays just as well now as it did back then, and there are a number of jokes in these films that still defy description. No one pratfalls like Keaton, and very few film comedians ever went as far as he did for a joke.

If I have a complaint about Sherlock, Jr., it’s the music on the copy I watched. The score for this version was created by a group called the Club Foot Orchestra. While some of it is quite good, a lot of it seemed not to match the action on screen. I found it distracting for about half the film, and almost would have rather watched in complete silence. Someone needs to create a score that not only matches this film, but that complements it.

Why to watch Our Hospitality: Plenty of quality Keaton stunts and bits.
Why not to watch: The plot takes forever to start.

Why to watch Sherlock Jr.: More ideas per minute than almost any other film.
Why not to watch: The hero actually doesn’t do anything.
Posted by SJHoneywell at 11:45 PM