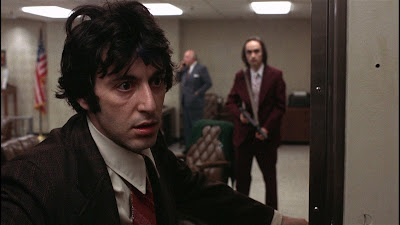 If you’re a movie geek, you know all about John Cazale. Cazale, who did at 42, was in a grand total of five films in his short career. As it happens, each of those five films was nominated for Best Picture. This is a unique record in film history—someone who was an actor in this number of films being connected exclusively with great films. One of those films is Dog Day Afternoon, a film I had heard of and knew something about, but had never actually seen until tonight.

This is the story of a bank robbery that goes very wrong very quickly. Three men walk into a bank, inexpertly draw guns, and raid the vault. One, Stevie (Gary Springer) immediately gets cold feet and runs off leaving the other two to complete the job. The one nominally in charge is Sonny (Al Pacino), who is an interesting case. He seems to only marginally know what he is doing. His accomplice, Sal (the aforementioned John Cazale), is the real gunman. Sonny and Sal manage to keep the bank from triggering an alarm, but have also entered the bank on the worst day possible for a robbery—the vault has just been emptied and there is only $1,100.

Sonny tries to rectify this by taking travelers’ checks instead, and then burns the register to prevent them from being traced. The smoke alerts the owner of a business across the street from the bank, and suddenly the area is knee-deep in cops looking to put down the robbery going on inside. What results is a standoff between Sonny and Sal and about half of the local police and eventually the FBI.

That’s really it aside from whatever we learn about the characters in the drama as it proceeds. A police officer named Moretti (Charles Durning) takes command of the situation initially, trying to discover as much as he can about the situation inside the bank. Leaving Sal inside with the hostages, Sonny ventures outside and discovers that a crowd has formed and the event is being televised. He finds himself something of a media darling, with a crowd of enthusiastic fans cheering him on outside the bank. Sonny and Moretti strike a bargain—for every concession Sonny is given, he gives away one hostage. He asks for a jet, a car to take him to the jet, and to see his wife.

It’s been established by this point that Sonny is married and has children, but when his wife shows up, it’s certainly not what anyone expects. Sonny is divorced from his first wife, and his new wife is a pre-operative transsexual named Leon (Chris Sarandon) currently living in a mental hospital. The discovery that Sonny is gay changes the mood and tenor of the crowd of onlookers; his support becomes more vocally favorable from the gay community, but more hostile overall, particularly when it is learned that Sonny wanted to rob the bank so that Leon could pay for his sex reassignment surgery.

Dog Day Afternoon is based on a true story, and the tale unfolds somewhat similar to reality, although not entirely, at least according to the principal real-life participants in this drama. The standoff eventually goes all day and into the night, with Sonny simply looking to get away by the end and trying to convince Sal that everything is still going to be alright.

It’s interesting to see a film like this years after it was first made. There are a number of actors with small, interesting roles here who eventually went on to have excellent careers. In addition to those mentioned above, Carol Kane has a small role as one of the tellers while Lance Henriksen, looking young for possible the only time in his life plays the FBI man who drives the limousine to the airport. Throughout, the casting is good—these people look like real people, particularly the bank employees. This is not a Hollywood glamor movie. These actors look and act like real people from stem to stern.

There’s a lot to like about this film. One of my favorite aspects of it, honestly, is that it doesn’t try to ascribe a higher meaning to the action. This is just something that happens and the story of the bank robbery, the people in the bank, and the lives of the people involved are told. That’s it. It wouldn’t be difficult to look at this in a number of critical ways—the change in the mood of the crowd when Sonny’s homosexuality is revealed is perhaps the most interesting. But these meanings genuinely don’t need to be there for the film to take shape. I also very much like that there’s almost no foreplay here. After the opening titles, we go straight into the bank robbery. We don’t see a plan being developed or really any discussion of any plan. The film starts and within a few minutes, guns are drawn and the bank is being robbed.

If anything, more modern attitudes toward homosexuality have only made Sonny more sympathetic than he might have been in the mid-1970s. I won’t say that this film is more relevant now than it was when it was made. It’s not. It’s equally relevant. The bigotry of the crowd, the immediacy of a crime being committed, and the natural slide from a plan into utter chaos are all just as much a part of life now as they were more than three decades ago.

This is another film chosen for me by Nick Jobe for the Demented Podcast. Nick is having a good season choosing films for to see in that I’ve liked most of them. This one falls into that same category. It’s good. It’s really, really good all the way throgh.

Why to watch Dog Day Afternoon: You owe it to John Cazale.
Why not to watch: You're expecting more plot with your movie.