A few months ago, I started compiling reviews for the Large Association of Movie Blogs, also known as the LAMB. Every month, I put up a compiled list of film reviews from fellow members on a specific national cinema, genre, or style. This is called “Foreign Chops.” The first edition of this was on wuxia films, a Chinese genre of film that follows the exploits of martial heroes. While this may include martial arts films, often the hero is armed with a specific weapon. Typical xia (warrior) heroes are not in service to a lord or master, and use their abilities to help the oppressed or to redress wrongs done to others. 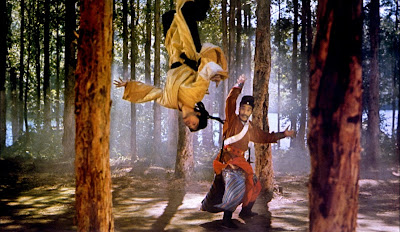 When I compiled that first list of films, Xia Nu (A Touch of Zen) appeared from several people. I knew it was on my list, but I didn’t really know anything about it. I’ve seen a couple of more modern wuxia films, but remained interested in this one, put off only by its three-plus hour length. Well, after a crazy week, I finally had time to watch it. Since watching, I’ve done a little research on it and have discovered that this film is formative for the genre, and now that I’ve seen it, I can also see this influence—a power it continues to have in Chinese films to this day.

At first, though, I was fairly convinced that I’d gotten the wrong film. There’s nothing like exciting martial arts action or battle scenes for the first hour of this film. Instead, we get a guy living and squabbling with his mother. Ku (Chun Shih) has knowledge and skill as an artist, but not much ambition, which troubles his mother. She’d like him to marry since he is over 30 and she’d like him to take the test to become an official. He’d rather sell portraits and think about opening a school. His mother (Cheung Bing-yuk) specifically would like him to marry Yang (Hsu Feng) who has recently moved into the area. Ku doesn’t pursue this seriously and instead works on a portrait for Ouyang Nin (Tien Peng).

It takes a good hour for anything to heat up, but when it does, it goes full-bore. We learn that Yang is actually a fugitive. It wouldn’t be fair to call her a fugitive from justice, though, because she’s on the side of all that is good and true. Her family has been killed off by the eunuch Wei. Wei is corrupt and when Yang’s family attempts to warn the Emperor, they are hunted down by Wei’s men and slaughtered. Yang, who escaped, is still being hunted.

Ku gets involved with Yang romantically and discovers her plight and decides he wants to help. In that moment, he becomes pretty competent, and his knowledge proves to be pretty useful to Yang. He comes up with a plan to get rid of the officials and soldiers who are tracking her. In an extended scene, Ku’s plan of “haunting” the local castle with dummies and puppets comes to full fruition, and the pursuing enemies are all slaughtered. The next morning, Ku comes to two disturbing revelations. First, Yang is missing and he learns that she has left him behind. Second, he realizes the terrible cost of the stunt at the haunted castle, as hundreds of men lay dead.

It is here that the film switches gears significantly. Ku eventually locates Yang in a monastery, discovering that she has given birth to their child and has since devoted her life to quiet contemplation. But, since the child is a continuation of Yang’s line, Ku and the baby are eventually tracked down by Wei’s army, putting both of them in danger and requiring Yang to return to him and to battle to save them both.

This is an odd film, particularly the opening hour, which appears to be simply a story of this mildly nerdy artist until it turns into a full-blown martial contest. The stunts and battles are the real draw here, as they are with most wuxia films. The fight in the bamboo forest (which appears twice) is quite the stunner. This segment happens twice because Xia Nu is a film in two parts—the end of Part I and the start of Part II are the same five minutes or so. This is a pretty scene, with some marvelous camera work and the sort of wire-fu stunts that keep people coming back to this genre. The final showdown and then the mildly psychedelic coda are similarly epic and take most of the last half hour of the film. King Hu is a smart enough director to keep this interesting and intense the whole way through.

The scene in the haunted castle is far less satisfying because it is so dark that it is difficult to see much of it. This is a very long sequence, and while the darkness may have been intentional to heighten confusion and put us in the same place as Wei’s men, I’d have liked to have seen it better.

The other issue I have here is with the passage of time. There’s no real indication of time passage, but it happens immediately—Yang disappears and Ku finds the baby in a matter of minutes despite more than a year passing. I get that, but since there is no real indication, textually or in terms of cinematic convention to show this, there is a bit of mental gear grinding to catch up.

It’s a pretty film, though, and while very slow for the first hour, once it gets going, it really goes full-speed ahead with some of the prettiest fight choreography I’ve seen. Set aside the time for it—you’ll need it. 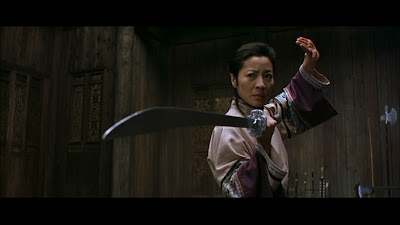 Wo Hu Cang Long (Crouching Tiger Hidden Dragon), I’ve recently discovered, is a film that didn’t do much for my podcasting bro, Nick. It’s a film I’ve battled with my mother about in the past as well. While Nick appears to be neutral on the film for reasons he can’t explain (other than Ang Lee’s direction), my mother actively thought this film was stupid. I don’t think she could get past the wire work, which I find to be one of the film’s most important and interesting features.

While the fantastic stunt work may well be the sell for this movie, once viewed, these aspects of the film become secondary to what is a truly beautiful romance and a complex story of love, revenge, betrayal, and honor. It uses a legendary sword called the Green Destiny as the Maguffin that drives the plot. The key actions of the film center on this sword, but the focus—as we discover in one of the key scenes—is on the characters and their relationships.

Li Mu Bai (Chow Yun-Fat) is a great Wudan warrior who carries the Green Destiny, but he has reached a critical point in his life. He wishes to give up his life as a warrior, since it has cost him as much as it has brought him. He gives the sword to Yu Shu Lien (Michelle Yeoh), requesting that she take it to their mutual friend, Sir Te (Sihung Lung) as a gift. It’s evident that the two have feelings for each other, and it’s equally evident that neither of them is willing to speak of it for some reason. She takes the sword, and while at Sir Te’s house, she encounters Jen Yu (Zhang Ziyi), the daughter of a the governor. Jen is promised in marriage and is not looking forward to it. Instead, she wishes for a life of adventure. Jen has secretly studied Wudan and makes the decision to steal the Green Destiny and set off for the life that she wishes.

Li Mu Bai and Yu Shu Lien get involved in the search for the sword, which both intensifies their relationship and increases the tension between them, since they refuse to discuss this with each other—the tension coming from the fact that she was once promised to Li Mu Bai’s friend, and their marriage would be an insult to his memory. Into all of this (actually, she comes in earlier, in the fight over the sword) is Jade Fox (Cheng Pei-pei). Jade Fox, it turns out, is the person responsible for teaching Jen the basics of Wudan. She is also Jen’s governess as well as the assassin who murdered Li Mu Bai’s master.

While the sword is deeply involved in all of this, it is truly a Maguffin here, and not the true reason for Jen’s actions. We learn after the sword is stolen that Jen had a passionate affair with a bandit named Lo (Chang Chen), which filled her with that desire for freedom and adventure that she so admires in Yu Shu Lien. In fact, her affair with Lo may be less about love for him and more about this love of a life freed of the constraints of a forced marriage and being the daughter of a governor.

Each of our main characters—Mu Bai, Shu Lien, and Jen Yu—all desire freedom more than anything, and all three of them find that it can either not be achieved or that when it is achieved, it is not enough or what was expected. All of these characters wish for something that they cannot truly have. The desire both drives them and breaks them. Jen battles with her desire for freedom throughout the film. She refuses the teachings of Li Mu Bai so as not to be tied to him, and similarly refuses to leave for a life of crime with Jade Fox for the same reason. Mu Bai and Shu Lien desire an escape from their ties to the past, but appear to lose identity without these ties, and are unsure of their ability to move into the future with each other.

The story here, the desire of Jen for true freedom, her relationship with Lo, and the fate of Li Mu Bai, Yu Shu Lien, and the Green Destiny all play out in front of a truly magnificent backdrop of action, stunts, and gorgeous scenery and cinematography. This is as much spectacle as it is film, and many of the more noteworthy scenes are noteworthy as much because of their backdrop as because of what takes place there. The confrontation between Li Mu Bai and Jen Yu in the bamboo forest is a scene of true magnificence. The marvelous wire work here adds a touch of the unreal, a dream-like quality that enhances rather than detracts from everything else that happens on the screen.

Wo Hu Cang Long was my introduction to wuxia, and it’s still my favorite. It had been too long since I’d seen it, and as always, watching it only makes me want to watch it again right away.

Why to watch Xia Nu: It’s the stylistic heart of the wuxia genre.
Why not to watch: The first hour is a head scratcher.

Why to watch Wo Hu Cang Long: Artistry and beauty.
Why not to watch: Your sensibilities are offended by wire work.