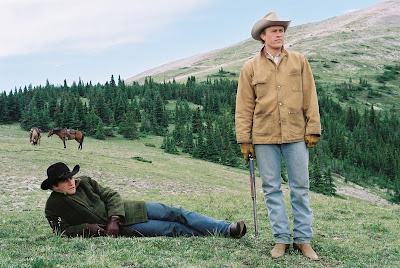 There are films that everyone knows even if they haven’t seen them. Some of these films fade out of mass public consciousness while others stick around, forever a part of the culture. There are a few of these every decade, maybe one every year or two. In 2005, that movie was Brokeback Mountain. Everyone knew at least the basic story of this film, and I’d guess that that’s still true today. Someone says “Brokeback,” and everyone thinks of Heath Ledger and Jake Gyllenhaal in a clinch and the line “I wish I knew how to quit you.”

What’s interesting from the point of view of someone who hadn’t seen the film until tonight is that this love story between two cowboys in the 1960s and beyond is about far more than that clinch that everyone (including me) thinks of when this film is mentioned. Oh, it’s there alright, but there’s quite a bit more here.

The film starts with two young men, Jack Twist (Gyllenhaal) and Ennis Del Mar (Ledger) get a job tending sheep out on the eponymous Brokeback Mountain. The conditions are difficult and pretty primitive—one of them lives at a base camp while the other sleeps (illegally) in a pup tent up with the sheep. Food comes in on muleback every week. Things go along like this for awhile until it becomes evident that there is an attraction between them, and eventually the two of them consummate their relationship. The summer ends, too many sheep have gone missing, and it’s evident that they won’t be hired back the next year. Part of that is that their boss Aguirre (Randy Quaid) is pretty sure that his two employees are more interested in each other than in the sheep.

Life takes over for the two men, who are forced to go in separate directions. Ennis marries his sweetheart Alma (Michelle Williams) and they have a couple of daughters. Jack works the rodeo circuit and falls for a rider named Lureen (Anne Hathaway). Ennis’s family struggles while Jack marries Lureen and finds himself wealthy thanks to her father’s business. But through all of this, the two of them find time to meet up again and renew their relationship. Alma sees the two of them together and figures out what is going on between the two of them. This eventually proves to be a wedge that breaks up his marriage.

Through all of this, Jack tries to get Ennis to leave his life and come with him so the two of them can be together. Jack wants this desperately, but Ennis is too tied to his life, and too afraid of the reality of being in a same-sex relationship in places where such things are like to get a man killed. It’s this fear that keeps them apart and the need they have for each other that continues to bring them back to each other and to Brokeback Mountain.

This is a film that could have gone wrong in a lot of different ways, but it never does. A large part of this is Ang Lee’s capable direction. Part of it also is the fantastic cinematography and beautiful scenery. This film is a standout in that category, with huge, open landscapes in almost every exterior shot. The main reason, though, is fantastic performances from not just the principal actors in Gyllenhaal and Ledger, but the supporting cast, particularly Michelle Williams and Anne Hathaway.

There are a number of astonishing things about this film, though, things that speak to our culture and speak to who we are as a species. I am remarkably encouraged by just how widely accepted this film was in 2005 and still today. That it is a sensitive, well-made film is a part of this, but that’s not everything. This film couldn’t have been made or wouldn’t have been accepted 20 years ago. While certainly films about homosexual love existed then, to find a film that achieved true mainstream status and not a sort of cult following on this topic is noteworthy. That Ang Lee was congratulated by China (where homosexuality is illegal) is equally noteworthy.

At the same time, it’s surprising that this film wasn’t made earlier. The American film industry has a long history of marginalizing entire populations before coming to the stunning realization that those marginalized people are, in fact, people deserving of having their stories told. Brokeback Mountain succeeds in many ways because it breaks away from the stereotypes of what we assume these characters should be in a Hollywood film. Rather than being prancing queens, these are men caught up in something far bigger than they can handle and something of which they cannot speak in the worlds in which they live. Turn Jack Twist into Jane Twist, and this is a film that has been made for decades.

Ultimately, though, Brokeback Mountain is a successful and tremendous film because it plays it straight (no pun intended). Everyone in the film buys into it. For Jack and Ennis, this is not about sex or lust, but love. It’s a love they are forced to hide and to deny, but it is real and encompassing, and directs the course of their lives and their decisions. These are characters we are bound to like, men we come to know and respect—and that might be the greatest victory of all. We respect them not because of their situation or because of their suffering, but because they are real people worthy of our respect.

I’m damn glad I saw this.

Why to watch Brokeback Mountain: It’s a story of true love beyond all expectations.
Why not to watch: Homophobes need not apply.