Film: Fiddler on the Roof
Format: DVD from Rockford Public Library on laptop. 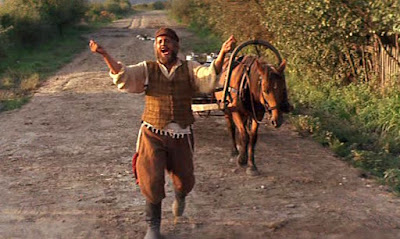 It would be a lie to say that I’ve been looking forward to Fiddler on the Roof. This is a film that doesn’t seem to know when to stop, clocking in at just over three hours. That’s a lot to take for any film, but even more when that movie is a traditional musical. Calling Fiddler on the Roof a “traditional” musical is true in more ways than one, since the main through story here is about tradition, family, and a changing world. I knew the story going in; I’ve seen this story performed on stage. It’s been some time, though (my age may have been in single digits), and so this felt like it was hanging over my head for ages. Well, now it’s no longer hanging over my head.

Fiddler on the Roof is the story of Tevye (Chaim Topol, typically just known as Topol), his wife Golde (Norma Crane), and their five daughters. Primarily, only the oldest three daughters are of any real concern to the plot here. We learn early on that the role of women in this Russian pre-revolution village is to essentially be married off. Tevye’s daughters come with the issue of not having a dowry, which means that their marriage prospects are more catch as catch can. They are forced to rely on the services of Yente (Molly Picon), the local matchmaker to find them husbands. Of course, since arranged marriages have been the way in this Jewish community since forever, this is not unusual.

Trouble starts with the eldest daughter, Tzeitel (Rosalind Harris). Tzeitel has piqued the interest of the town butcher, the awesomely named Lazar Wolf (Paul Mann). Tevye would prefer his daughter marry someone with some education, and perhaps someone a little closer to her own age, but Lazar is a wealthy man and will keep his daughter in comfort, so he agrees to the match. However, Tzeitel has set her sights on Motel (pronounced closer to “mottle” and played by Leonard Frey), a poor tailor whom she has known her whole life. Upset by this break with tradition, Tevye rages but eventually relents and Tzeitel marries her tailor rather than the butcher.

Early in the film, Tevye takes in Perchik (Paul Michael Glaser) to tutor his daughters. Perchik is a revolutionary with some radical ideas. While teaching Tevye’s and Golde’s children, Perchik becomes involved with second daughter Hodel (Michelle Marsh). As a revolutionary, though, Perchick is constantly under threat from the ruling class. He and Hodel plan to marry, this time without even asking for Tevye’s permission. Instead, they merely ask for his blessing. Again, Tevye rages but eventually gives in. When Perchik is sent off to Siberia, Hodel goes to him, promising to her father that she will marry him in the traditional manner.

Third daughter Chava (Neva Small) causes the greatest rift in the family. Chava has to bad fortune to fall for Fyedka (Ray Lovelock). While hardly an issue in the world we live in now, in pre-revolution Russia, a Jew marrying a member of the Russian Orthodox church simply wasn’t done. This is where Tevye reaches his breaking point.

All of this happens in the context of the Jews living as an oppressed people in their own country. While the local constable (Louis Zorich) is a friend of Tevye, he is powerless to contest the orders that come from above. We get a pogrom in the middle of Tzeitel’s wedding. Eventually, the Jews are forced to leave their town and community entirely. The closing minutes of the film are concerned with this sudden Jewish diaspora from the small Russian towns.

Throughout the film we are given glimpses of the titular fiddler on one roof or another. The fiddler acts as a metaphor for how Tevye sees life. Like the fiddler, he wants nothing more than to create a pleasant tune, but he must constantly balance himself and fear falling and losing everything. For Tevye, the tune is the life he is trying to live, and the roof is his poverty, the changing world, and the realities of life as a Jew in Russia.

The story here is a good one, perhaps even a great one. While our world very much has changed from the one depicted here, there are still some lessons to be gleaned. We live in a constantly changing world ourselves. Change is constant and yet there is still a need for tradition, the world that Tevye tries to keep alive as much as he can. In this world, Tevye is the best man he can be, which is what makes him such a compelling character.

The real reason to watch Fiddler on the Roof is the music, and the music is truly grand. There are a ton of good songs here and memorable ones. I said at the top that it has been decades since I encountered this story, but I still knew at least half of the songs within the first couple of bars of music. There are some truly great dance numbers as well, particularly the celebration of the announcement of Tzeitel’s wedding and the wedding itself. This is what the music in a musical should be, and Fiddler on the Roof has some of the best around.

I’m surprised at how much I liked this. I went into this thinking it would be something to be endured, but it truly isn’t. This is a film about change and family and tradition. But more than anything, this is a film about life and a celebration of life.

As a final note, there was evidently some controversy that Chaim Topol was given the role of Tevye, since it was evidently Zero Mostel’s role to lose. Having seen this, I can’t imagine anyone but Topol in the role. He’s that good.

Why to watch Fiddler on the Roof: A story of tradition, love, change, and life.
Why not to watch: It’s three hours long.