Picks from Chip: And Then There Were None

Film: And Then There Were None
Format: Turner Classic Movies on rockin’ flatscreen.

This is the fifth in a series of twelve films suggested by Chip Lary at Tips from Chip. 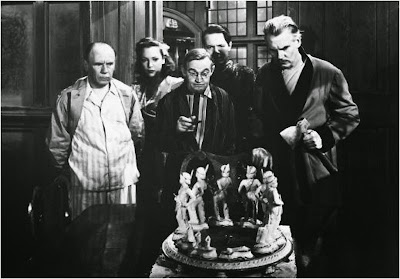 The vast majority of my pleasure reading is non-fiction. I tend to read a lot of science and similar topics—cosmology, evolutionary biology, sociology, and the like. So it’s rare that I come across a movie where I’ve actually read the source material. In the case of And Then There Were None, I actually have read the source material. A couple of years ago I went on a mystery novel kick and read a bunch of Agatha Christie for a month or two. While most of that was Hercule Poirot stories, I did read the novel that this film is based on. It’s widely considered Christie’s masterpiece, and I’m not confident that I could disagree with that assessment.

In fact, this is such a classic story that it’s been spoofed quite a bit. Murder by Death is straight out of this movie’s playbook, and there’s a great deal of this in Clue as well. There’s even a connection to a film like House on Haunted Hill. But that’s all beside the point. The premise is one you’ll be familiar with even if you aren’t familiar with this particular story. A group of eight people and a couple of servants are invited to an island where they are to spend the weekend at the behest of their host, a Mr. Owen.

It soon becomes evident that none of these people actually know each other. And then, immediately after dinner, their host “appears” as a recording that is played for the guests and the two servants. In a nutshell, Mr. Owen accuses everyone in the room of being a murderer and someone who has gotten away with that crime. What follows is the rest of the weekend, which involves the people being slowly picked off one at a time, slowly and surely, and with most of those deaths coming in a manner similar to the “10 Little Indians” nursery rhyme.

This is a film from 1945, which means that we’re not going to see a great deal of gore here, despite one of the deaths being caused by an axe. No, we’ll get implications of gore and nastiness, but nothing that we’re actually going to see. That’s okay. I’d have been incredibly surprised if there had been any real blood.

There are, naturally 10 actors in the film. Actually, there are 11 because there’s also the guy who takes everyone out in his boat. Several of the characters are bumped off so quickly that they’re barely worth a mention. The people we spend the most time with are Judge Francis J. Quinncannon (Barry Fitzgerald), accused of sending an innocent man to the death chamber; Dr. Edward Armstrong (Walter Huston), who killed a patient while operating on her drunk; William Blore (Roland Young), a detective who perjured himself, resulting in a man’s death; Vera Claythorne (June Duprez), accused of killing her sister’s fiancé; and Philip Lombard (Louis Hayward), who apparently killed nearly two dozen East Africans.

One of the conceits of the movie is that the dining room table has a centerpiece of 10 little ceramic Native Americans, one of which is broken each time someone dies. While the people in the house aren’t always sure of the number of people currently alive, we as the audience are, because we frequently get a shot of the table with another figurine missing, broken off at the ankles.

I’m of two minds on this film. On the one hand, it really is a solid mystery film. It’s a very smart mystery, too. The characters, for the most part, aren’t dumb. These are people who find themselves in a life-or-death situation and act intelligently and with a purpose instead of simply panicking and falling into horror/slasher movie clichés. In particular, the judge and the doctor seem to know what they’re doing and work in a manner that gives us frequent indications that it will pinpoint the killer, who is presumed to be one of the guests. Fans of films that touch on the noir genre or fans of mystery films in any respect will find a lot here to love.

The problem is that I’ve read the source material and Christie’s original ending is so much better than the ending that we’re given here. So how did that happen? Blame it on the Hays Code which stated that a criminal couldn’t get away with a crime—crime could never be shown as paying or being right in any way. And Then There Were None skirts this line pretty closely, but still doesn’t go as far as Christie’s original story and that’s kind of a shame. The ending here is an ending that fits with the time, and this is a case where that’s a real detraction from the story as a whole.

So it works really well up to the last couple of minutes, but it punks out at the end. It’s not the film’s fault, but it’s still the truth. I liked this pretty well and I think it’s worth seeing, but it would probably rate a full star higher for me if it had gone with Christie’s original ballsy ending.

Five for five, Chip, but I’d be lying if I didn’t say this one disappointed me at the end.

Why to watch And Then There Were None: It really is a great mystery story.
Why not to watch: The ending of the book is so much better.

Posted by SJHoneywell at 1:55 PM

Email ThisBlogThis!Share to TwitterShare to FacebookShare to Pinterest
Labels: And Then There Were None, crime, drama, Picks from Chip, Rene Clair