Guess Who's Coming to Banquet 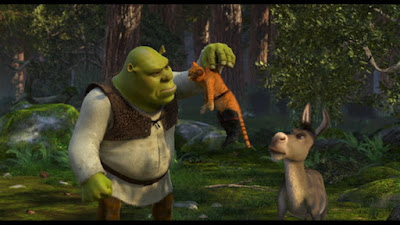 There was a time when anyone could be fairly certain that a sequel would be a step down from the original. Things have changed a bit. There are plenty of modern sequels that are equal to or better than the original film, but I can remember a time when finding a sequel that was even in the same ballpark as the original film took some thought. Now it’s not that hard to think of a film where the sequel tops the original, even though sequels are still often disappointing. So it was that I went into Shrek 2 with guarded optimism.

I like Shrek. It’s not only a good story, it’s a clever script that makes smart reference to a lot of other movies and a number of fairy tales. Shrek 2 has the unenviable task of building on that created mythology and retaining the same level of cleverness. This is not an easy task for an animated film following up a movie that not only won the inaugural Oscar for Best Animated Feature, but was good enough to be nominated for Best Adapted Screenplay.

We pick up with our ogre hero Shrek (Mike Meyers) and his new wife Princess Fiona (Cameron Diaz) on their honeymoon. They return home to find Donkey (Eddie Murphy) has panicked in his relationship with Dragon and has run away. Shrek’s and Fiona’s return home is followed by an invitation to the kingdom of Far Far Away, which happens to be where Fiona is originally from. It seems that her parents, King Harold (John Cleese) and Queen Lillian (Julie Andrews) would like to meet her new husband.

What we learn is that the person who was supposed to rescue Princess Fiona was, in fact, Prince Charming (Rupert Everett). This was a deal cut between King Harold and the Fairy Godmother (Jennifer Saunders), who happens to be Charming’s mother. Unhappy with the idea of having to meet Fiona’s parents, Shrek goes on the trip with poor grace only to have his worst fears confirmed. King Harold is not happy with an ogre for a son-in-law. Harold decides to take action, hiring Puss in Boots (Antonio Banderas) to kill Shrek. That’s not going to happen, though, and Puss eventually sides with Shrek and Donkey. The trio breaks into Fairy Godmother’s potion factory and steals a Happily Ever After potion.

The potion turns Shrek into a human (and restores Fiona’s humanity) and turns Donkey into a white stallion. The third act turns on getting Shrek in this new form back to Fiona while King Harold, Prince Charming, and the Fairy Godmother conspire against the couple with the hopes of getting Fiona to fall for the prince and forget Shrek, whether in human or ogre form.

The best part of Shrek 2 is the addition of Puss in Boots. At one point, Donkey says that the part of annoying talking animal has already been taken, but Puss is his own man, or at least his own cat. He’s a character that really adds to the overall world of the film, being equal parts adorably cute and ball of honorable ferocity. It’s also nice to see a progression on the villains here. The Fairy Godmother is absolutely the “bad guy” character, and she’s at least as interesting as Lord Farquard from the original film.

This is also a film that stays true to its roots in terms of the comedy and making fun of pop culture. Some of the references end up dated a decade after the film was released, but enough of them still work and still work well that the film doesn’t lose much by it. Connections with fairy tales and nursery rhymes continue here, and none of them are referenced in such a way as to detract from the overall story.

What we lose here, though, is the charm of the original. I can’t complain that Shrek 2 isn’t well made, or funny, or clever because it is all of those things. But I expected all of those things. I expected it to be smart and irreverent and deal with this world of fairy tales with a cynical eye. What made Shrek so much fun was that it was so surprising. Shrek 2, through no fault of its own and strictly because it’s a sequel to Shrek has lost that joy of being surprising.

I enjoyed this, but there’s a part of me that realizes I expected to enjoy it in the same manner I enjoyed the first film, and that’s simply impossible. If you like Shrek, you’ll find much the same in Shrek 2, and arguably with more references and jokes. But it’s simply not as fresh as the first film, and that’s a shame. It’s an unavoidable shame and not at all the fault of the writers, but it’s there all the same.

Why to watch Shrek 2: Builds on the previous story and its penchant for taking the piss out of fairy tales.
Why not to watch: Despite what you may have heard, it’s not really better than the original.

Posted by SJHoneywell at 7:18 PM