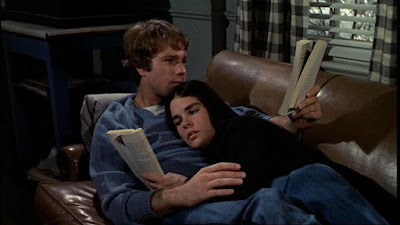 I make no secret of the fact that I am a fan of Roger Ebert. I think he’s one of the finest film critics to every sit behind a typewriter. Ebert came up with a list of film tropes that are some of the great observations of filmdom available. My favorite is what he called the Gandhi film, a film that one is happy to have seen but never wants to see again. I’m also a fan of “idiot plot,” or a movie where the problems could be solved in a couple of minutes if only the characters were not all idiots. The third that I love is “Ali MacGraw’s disease,” which is defined as a disease in which the only symptom is that the patient grows more beautiful before finally dying. That phrase comes from Love Story, a film that I finally got around to watching.

I had a lot of hope for Love Story. Romances aren’t my favorite genre, but there are plenty that I do like. I also tend to like my romances when they play more to the tragic end of the spectrum, and I knew going in that that’s what was on offer here. Additionally, Love Story was nominated for seven Oscars: the five listed in the tags as well as Best Supporting Actor and Best Original Score (the only one it won). So I genuinely was interested in seeing where this went.

The movie loses me within the first couple of minutes, though. We start with the two characters who are going to occupy all of our time for the 100 minutes of running time. These are Oliver Barrett IV (Ryan O’Neal) and Jenny Cavalleri (Ali MacGraw). Oliver is a rich kid at Harvard, a school that has a building named after an ancestor. Jenny is a Radcliffe student there on merit rather than legacy. She is immediately dismissive of him and not shy about saying so. As a matter of fact, both of them are pretty unlikable.

Oliver, in addition to majoring essentially in slacking and playing on the Harvard hockey team, is also majoring in resenting his father (Ray Milland). Jenny, in complete opposition, has a great relationship with her father Phil (John Marley, who was nominated and not in the film nearly enough). Romance eventually ensues despite the fact that Jenny appears to have nothing but contempt for Oliver. His parents immediately disapprove of the relationship, specifically because Jenny doesn’t come from money and is not on the social register. It’s a sticking point that Phil owns a bakery rather than having a real job.

This naturally causes a huge schism between Oliver and his father. In what can only be termed “a really obvious ploy,” Oliver proposes to Jenny and his father cuts him off clean. So now Oliver and Jenny need to make their own way in the world, which will be difficult with Oliver being accepted to Harvard Law. Jenny gives up her opportunity to study music in Paris to support him, and eventually he graduates and gets a job at a law firm so that he can support her. And really, part of this pisses me off to no end. Oliver drives a cool antique car and spends time fixing a boat. They have a fucking boat and a classic car and they're crying poor? Sell the fucking boat, asshole.

Ah, but this is a tragic romance, something hinted at by the opening line. Jenny is unable to conceive because she is sick. Really, really sick according to her doctor. We’re never told exactly what is ailing Jenny (although it sure seems like leukemia), but she’s super sick. And, because this is the way you should treat sickness, Oliver is told not to tell her that she’s sick. He should just act normally because that’s the best way to handle a serious illness. So that’s what he does until Jenny eventually figures out that she’s dying, since for whatever reason, ignoring a serious illness isn’t the best way to cure it. The last half hour of the film is spent watching Jenny die, because it takes us a little more than an hour for her to even become sick in the first place. Fortunately for all of us, Ali MacGraw disease is fatal in less than 45 minutes of screen time.

I really didn’t like this movie, and the reason I didn’t is that I really didn’t like either Oliver or Jenny as people. Jenny spends the entire movie trying to prove just how smart and clever she is, mostly by assuming that everyone around her is stupid and worthless, including Oliver. Oliver is cursed with a case of sadly non-terminal hubris, which actually makes Jenny’s playful contempt for him more understandable. Oliver Barrett III (the dad) is painted as the villain for a great deal of the film, but he demonstrates by the end that he actually cares about his son, not that his son bothers to notice. The only character I really like—Jenny’s dad Phil—isn’t on screen nearly enough.

So what we have here is a story of two selfish assholes who discover a selfish asshole love between themselves. They live together, piss off a lot of people, and thankfully are unable to have children until one of them dies. Sadly, Ali MacGraw disease was not contagious and didn’t kill off Oliver.

Screw this movie. Screw it hard, long, and sideways.

Why to watch Love Story: Aside from Romeo and Juliet, this is the definition of the tragic romance.
Why not to watch: It’s surprisingly hateful in a lot of ways.

Posted by SJHoneywell at 7:09 PM