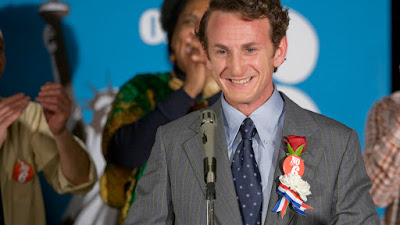 In 2008, when Milk was released, it seemed like a story that needed to be told. Now, about a decade later, it feels a lot more important in some ways. This is the story, or at least part of the story, of Harvey Milk, the first openly gay person elected to public office in California. That Milk served only 11 months before being assassinated is clearly a part of the reason for the biopic.

A summary of the film is more or less the summary of the last eight years of Milk’s life. Beginning in New York, Milk (Sean Penn) and his partner Scott Smith (James Franco) head to the more gay-friendly environs of San Francisco, eventually settling in an area known as the Castro that was becoming a more gay-friendly and dominated area of the city. Still subjected to near-constant discrimination, Milk starts working as an activist and running unsuccessfully for political office. Scott begins as his campaign manager, but eventually becomes frustrated with Harvey’s activism and leaves him.

After three unsuccessful political campaigns, Harvey brings in Anne Kronenberg (Allison Pill) to run his fourth campaign. The changing political landscape of San Francisco and some friendly redistricting results in Milk’s election as a city supervisor, which is evidently the equivalent of city council. It is here that he clashes with fellow supervisor Dan White (Josh Brolin) over a variety of issues, with Milk generally coming out on top. Frustrated, White resigns, then asks for his job back. Milk’s influence (according to the film at least) prevents this, which causes White to break into City Hall and assassinate San Francisco Mayor George Moscone (Victor Garber) and Milk.

Naturally, Milk focuses on the politics and political struggles of Harvey Milk. Milk’s personal life is touched on, including Scott Smith still operating in the same political circles. This also includes Milk’s second serious relationship in the film with Jack Lira (Diego Luna), who is portrayed as being loving and caring, but also somewhat unbalanced.

Much of the film is dedicated not specifically to Milk’s politics but his methods. Throughout the film, his modus operandi is to face down those who oppose him as directly as possible. In his initial political campaigns, many of his clashes are with David Goodstein (Howard Rosenman), an influential gay leader and publisher in the area. It’s Goodstein’s position that remaining under the radar and pushing the agenda slowly from the shadows is the best way to handle things, while Milk advocates coming out to friends and family. Much of this coming out plan happens in response to Proposition 6, an attempted piece of legislation put forward by state senator John Briggs (Denis O’Hare) that would force the firing not just of gay teachers and public servants, but also those who support and advocate for them. The film also touches on Milk’s working more or less as a mentor for Cleve Jones (Emile Hirsch), who is still a strong advocate for gay rights.

Milk’s biggest problem is also its biggest strength: Sean Penn. The unfortunate reality of Sean Penn is that it is now virtually impossible for him to disappear into a role the way he needs to or the way anyone needs to. No one can look at him on screen and not realize that it’s Sean Penn, at least on some level. I won’t dispute that he’s a talented actor. He is, and he’s one of the best of his generation. It’s just that no matter how good he might be in a role, he’s always Sean Penn in the role and never the person he’s supposed to be. In this case, I’m not sure that there was anyone who could have handled Harvey Milk as well as Penn does. His voice bothered me initially, although I did get used to it.

Gus Van Sant is smart enough here to not shy away from the sex. All of this takes place in a time where sex in the gay community was frequent and fairly open. Because of this, there are a lot of innuendos and open comments about sex and/or soliciting for sex—again, this is pre-AIDS, and so is true to the time. It’s a bit off-putting today, but entirely real for the time in which the film was made. It’s the right decision—Van Sant is going for reality here rather than a whitewashed version of it. The only place where the film seems to dip into speculation is Dan White. In the film, it’s Milk’s opinion that White is a deeply closeted gay man. He may have been, and Milk may have thought so, but I don’t know one way or the other.

Why to watch Milk: It’s a story that still needs to be told.
Why not to watch: Sean Penn’s accent.

Posted by SJHoneywell at 3:41 PM