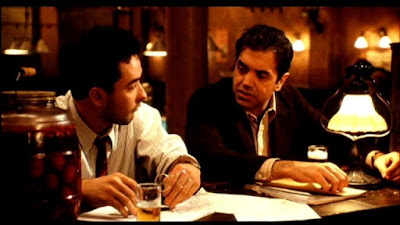 A little over a month ago, when all of the sexual misconduct allegations were breaking and it seemed like half of Hollywood was a sexual predator, I posted something about my own (admittedly temporary) inability to work up any enthusiasm for watching anything. There are posts I’m going to have to make here that will concern known and admitted predators, and I’m still not entirely sure how to handle that. Bullets Over Broadway is a case in point. Woody Allen has been accused of the sexual abuse of a minor. He also happens to be an acclaimed writer and director, and Bullets Over Broadway is one of his better films.

And herein lies the problem that I was talking about a month ago. How exactly do I address Allen’s work? I mean, Bullets Over Broadway is nicely directed. It’s got a lot of moving parts and all of them work together well. It’s a good script with memorable characters. And yet, I find it difficult to praise Woody Allen right now.

So, I’m not going to, but I am going to praise the film itself and the tremendous cast. Playwright David Shayne (John Cusack) wants to get a play on Broadway and wants to direct it himself, something that his manager Julian Marx (Jack Warden) warns him against. But David is adamant, and arranges for funding from a known mobster named Nick Valenti (Joe Viterelli) on the condition that his dance hall girlfriend Olive Neal (Jennifer Tilly) get a part in the play. Olive has no talent and is completely wrong for the part, but David agrees, desperate to get his vision on the stage. Unbeknownst to him, Olive comes with Cheech (Chazz Palminteri), her bodyguard, who is actually there to look out for her on stage and make sure she stays on the straight and narrow off stage.

Also involved in the play are fading Broadway star Helen Sinclair (Dianne Wiest, who won a supporting Oscar for the role), effusive drunk Eden Brent (Tracey Ullman), and aging star Warner Purcell (Jim Broadbent), who is a compulsive eater. While the play itself is constantly up in the air, David finds himself falling for the charms of Helen despite their age difference and despite his relationship to Ellen (Mary-Louise Parker). More frustrating for David is the fact that the best suggestions he gets concerning the play and its various rewrites come from Cheech, who is discovered to have a real talent for dialogue and plotting. The cast is rounded out by smaller roles for Rob Reiner, Harvey Fierstein, and Edie Falco. Hard to go wrong with a cast that good.

What follows on the screen is about what you would expect. Things get completely out of hand because everyone has an oversized ego, no one is willing to check him- or herself, and things are always on the verge of spinning out of control. Eden sticks her nose where it doesn’t belong, and, worse for the future of the play, Olive seems to have a thing for older men and finds herself attracted to Warner Purcell. For his part, the stress of the play and having an affair with the girlfriend of a mobster causes his eating disorder to return to the point where he’s caught stealing the treats for Eden’s Chihuahua.

This is something that Allen has always done well. He writes comic characters in a way that they are perhaps a bit extreme, but never so extreme that they can’t be believed. The situations are never so out of control that they don’t make sense or can’t be honestly believed, and the character reactions all fall within the realm of believability as well. And it’s funny. It’s genuinely funny. Comedy is where Allen first made his bones. His comedies can be a little uneven at times, but here, it works. One of the reasons it does is that Bullets Over Broadway focuses far less on the relationship issues in terms of sex (although that’s a part of it) and far more on the artistic crisis that David goes through for the entire running time.

Bullets Over Broadway is another step in the evolution of John Cusack as an actor. I’m of the opinion that Cusack graduated to real adult roles with The Grifters in 1990, and here, he’s continuing that move away from the sort of teen comedies that made him a name. This also comes right in the heart of the best part of Chazz Palminteri’s career, and it’s not a huge shock that he earned an Oscar nomination for this. The same is true of Jennifer Tilly, an actress I have liked since I first saw (or heard) her, and she earned her supporting nomination as well.

So what do I think? I think it’s a hell of a good movie. I wish I didn’t have to feel like that’s somehow betraying something to say that, but as I said a month ago, this blog has always been about the movies and will continue to be about the movies. That some of those movies were made by monsters can’t be helped.

EDIT: There's a lot to like about Bullets Over Broadway, but it occurred to me today that there's a line in the film that, based on the accusations against Allen, rings in a particularly disturbing way. Toward the end of the film, we're told by several characters that, "...an artist creates his own moral universe." That's offered as justification for immoral behavior in the film. But now I wonder just how oddly that sentiment comes across given the accusations against Allen and others.

Why to watch Bullets Over Broadway: It’s as funny as Allen’s earlier work.
Why not to watch: Right now, feeling wanting to praise a movie written by someone who should probably be prosecuted.