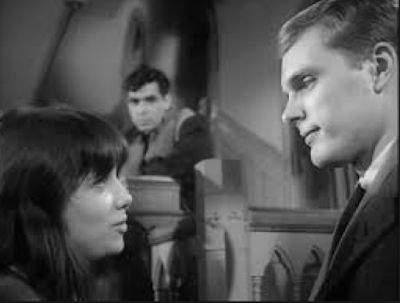 There’s a particular type of film that takes place at least in part in the confines of a psychiatrist’s office. I think people tend to be fascinated by mental health issues, probably because of a desire to understand something that seems so strange. Movies in this odd little genre run the gamut from serious looks at mental health for the time (The Snake Pit) to prurient tales (Shock Corridor). They often deal with terrible, deep-seated issues (Equus, Ordinary People, Good Will Hunting) and sometimes romance (I’m a Cyborg, but That’s Okay, Silver Linings Playbook). David and Lisa attempts to be many of these things. It wants to be serious and it wants to be a romance. What it isn’t, though, is a real look at the problems of our characters.

Here’s what I mean by that. David Clemens (Keir Dullea) is brought to a youth-oriented psychiatric hospital more or less disguised as a school. David has an intense fear of being touched. He is also obsessed with time, and has a recurring dream in which he executes people with the hands of an enormous clock. Do we learn why any of this is true? We do not. Lisa Brandt (Janet Margolin) gets called a schizophrenic in the movie, but she seems to have a split personality. There is Lisa who speaks only in childish rhymes and there is Muriel, who doesn’t speak and communicates only by drawing. Do we learn why? Of course not.

There are other students, of course. Simon (Matthew Anden) is of primary interest because he is eventually befriended by David, much to Lisa’s consternation. David and Lisa slowly become drawn to each other, David finally getting her to trust him by speaking back to her in rhyme. Meanwhile, David plays a game of mental cat and mouse with Dr. Swinford (Howard Da Silva). In these moments, David is frequently smug while Dr. Swinford is completely open and accepting of everything David tells him.

There’s a little exploration of David’s relationship with his parents (Neva Patterson and Richard McMurray). After David’s mother visits one day and discovers that there is a great deal she doesn’t like about where David is, his parents pull him out despite his still needing treatment. After a few days, he returns to the school of his own accord and is accepted back in no small part because of his still-blossoming relationship with Lisa, who spends a great deal of time with John (Clifton James), a worker who seems to be the only person aside from David who can really communicate with her.

The biggest issue with David and Lisa is that it wants to focus on the relationship between the two title characters. What that means is that the illnesses that have put them together and still sometimes drive them apart are never fully explained or even explored. This is something it has in common with many similar films. Unfortunately, this still comes from an era when people seem to be instantly “cured” of their mental illnesses by a sudden breakthrough or a new insight rather than anything that looks like genuine mental health.

Because of that, the things to explore here are the relationships themselves, and here there’s also a bit of an issue. Of all of the characters in the film, only the two people who work at the “school” are really that interesting or sympathetic. David is smug and arrogant, hating just about everything that happens around him and everyone he is near. He’s antisocial, arrogant, and smug, which makes him difficult to like at best. Lisa is childish, with almost everything she says sounding like something from a Dr. Seuss book (“I’m not a lump and I like to jump!”). Finding any sort of romantic attachment to her smacks a bit of pedophilia. She’s clearly not a child physically (Margolin was 19), but mentally, she is. It’s the same problem I had with Gigi--it’s like finding sexual attraction in someone who is deeply concerned with events on Dora the Explorer.

Despite this, the film kind of works. Much of this comes from the performances that manage to overcome some of the problems. Keir Dullea is very good in this, and Margolin, while her character is annoying, commits fully to the role. It’s also worth noting that Howard Da Silva was a blacklisted actor; this was his first film after 11 years of not finding work on the screen.

I don’t know how much I like this. It has its heart in the right place, but leaves out so much of what is necessary to truly make the film interesting and memorable. It could stand another 20 minutes or so, provided that time was spent letting us in on the issues these characters are facing.

Why to watch David and Lisa: There’s no romance like one that takes place in an asylum.
Why not to watch: Like most films about mental health, it’s ultimately too simplistic.

Posted by SJHoneywell at 3:35 PM