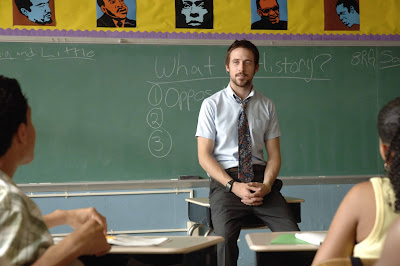 I didn’t know what to expect with Half Nelson, but I was extremely nervous about where we were going a few minutes in. Half Nelson looks like it’s going to be another one of those “white savior” movies where the white teacher is working in an inner city school inspiring all of the minority kids to escape the ghetto. Thankfully, it’s quickly evident that it’s not that at all. This is not going to be one of those inspirational films, but it is going to wind up being depressing as all hell.

That is where we’re going to start, though. Dan Dunne (Ryan Gosling) is a history teacher at a middle school where he also coaches the girls’ basketball team. The kids seem to like him; he’s young and relatively hip, treats the kids as if they have intelligence, and tends to avoid the curriculum in favor of something a lot closer to communist philosophy a la Engels. It’s a front, though. At night, Dan Dunne does a lot of drugs, specifically cocaine, often freebasing. Much of this comes from a failed relationship with Rachel (Tina Holmes).

What we learn eventually is that Rachel has moved on from her time with Dan and is engaged. It’s also evident that he and Tina had the same addictions. Rehab worked for her, but didn’t do much for him. He’s convinced that he’s got everything under control as his behavior continues to spiral.

Along with this story, we get Drey (Shareeka Epps), one of Dan’s students. Shareeka is a good student, bright and engaged in class, but is being pulled in different directions. She has a brother doing time for dealing for Frank (Anthony Mackie). Since Drey has an absent father and a mother who works all the time, she is frequently on her own, making her a target for Frank’s operation. He’d like to bring her into the business and have her start dealing for him despite (perhaps because of) her young age. At the same time, Drey is drawn to Dan as something like a mentor. Based on her past, though, she is capable of seeing exactly the sort of spiral that Dan is on and knows where things are headed.

I genuinely expected this to end up as something like Dangerous Minds or Freedom Writers or even Stand and Deliver. I was on the one hand relieved that that wasn’t the case. The last thing I need (as a teacher in my non-blogging life) is yet another film where a super teacher, the type that never exists, inspires his or her students to achieve great heights of intellectual and/or artistic prowess. It would have been very easy for Half Nelson to be an even more half-assed version of Dead Poets Society, and thankfully it isn’t.

Instead, it’s going to be a rapid descent into a drug-fueled hell and all of the implications that has with Dan Dunne and his collection of students. We only see him interact with the one class, the one that includes Drey, but it’s safe to assume that he has other students as well and other classes where his behavior is likewise becoming more and more erratic.

For all of the fact that Half Nelson tells a story very different than the one that is expected, the single Oscar nomination is an odd one in a certain respect. I’m not going to deny that Gosling is very good in this. Gosling has made a career based on his boyish good looks, and putting him in a role where he subverts all of that natural “nice guy” appearance and persona works for him well. I question, though, why Shareeka Epps seems to have been routinely ignored here, since virtually everything that doesn’t rely on Gosling to move the story forward relies on her. The truth is that she was nominated in a number of places for this role (and won a few), but seems to have been overlooked in terms of the famous ones. I don’t understand that, because she is very much the heart of the film.

That’s the genius of Half Nelson. Just as it would have been easy to make this into one of those inspiring teacher stories, it would have been very easy to make this a story of redemption as Dan Dunne hits rock bottom and begins the struggle to take his life back, probably for the sake of his students. Instead, this is as much Drey’s story as it is Dan’s, and really, Drey’s story is a lot more interesting.

That’s what the film does well. Drey is placed in a position where she is forced to make a true choice, one that has greater and deeper implications for her entire life. Should she follow the path of her brother and deal for Frank? Should she attempt to follow the path more outlined by her teacher despite the fact that he’s an addict and likely one of Frank’s customers? The question that is going to be answered, then, is whether or not Drey is going to resist that lifestyle or be caught up in it

Half Nelson is not a film that one enjoys. It is a good one, though, and that’s enough.

Why to watch Half Nelson: Despite all the hallmarks, it’s not a “white savior” movie.
Why not to watch: It’s depressing as hell.