Films: Dracula Has Risen from the Grave
Format: DVD from Putnam County Public Library through interlibrary loan on various players. 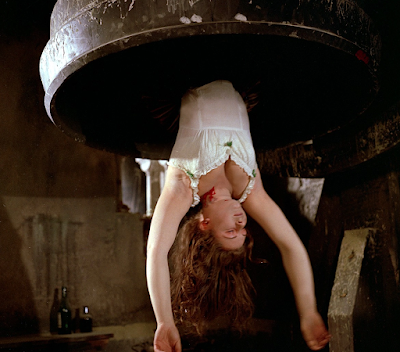 I have a love of Hammer horror movies, and honestly I think anyone who has any affinity for horror probably feels the same way. The Hammer films are a sort of a tangible bridge between the tamer Gothic horror tales and weird science fiction through the ‘50s and the much harder and violent horror of the ‘70s. Many of the Hammer films are darker than the earlier films, often bloodier and grittier. But they also resurrect many of the classic Universal monsters and bring them forward, if not in setting in most cases, at least in terms of color and violence. Actors like Peter Cushing and Christopher Lee made a lot of their bones in films like this, often play opposite each other. Dracula Has Risen from the Grave is generally forgotten in the Hammer series, and it’s far better than that sad fate.

In a small Eastern European town in the early 20th century, there are terrible memories of the reign of Count Dracula. But we are a year past that as the movie starts, and while Dracula himself no longer curses the town, his shadow is still on the area and the people. The local priest (Ewan Hooper) has more or less given up on holding mass, forcing a visit from the area’s monsignor (Rupert Davies). He treks up to Dracula’s castle and exorcises it, planting a massive golden cross across the door.

Meanwhile, the priest has not made the whole trip. He falls while heading back down the mountain and cuts himself. The blood naturally falls into the mouth of the dead count, reviving him. The priest is soon in his thrall and Dracula (Christopher Lee) is miffed about the loss of his castle, to say the least. He wants revenge on the man who did it, which means he and the priest are off to the town the monsignor lives in.

It’s here we meet the other people who will be important in this drama. The first is the monsignor’s sister, Anna (Marion Mathie), who is widowed. She has an adult daughter Maria (Veronica Carlson), who is involved with a local student named Paul (Barry Andrews), who lives and works at the local inn, which is also a bakery. Paul is frequently teased by Zena (Barbara Ewing), who also works at the inn. Zena, we learn, is a favorite of the local men, but she does have a bit of a thing for Paul, and wonders why he won’t give her a literal tumble some night.

Paul is soon introduced to Anna and the monsignor, and, in an attempt to be as honest as possible, admits to being an atheist. I have to say, I’m impressed at this point, because Dracula Has Risen from the Grave gets atheism right. Confronted with the question of denying the existence of God, Paul states that no, he simply doesn’t accept it. Point scored for the movie. Anyway, this is naturally scandalous (although we’re given to believe it would be equally scandalous were Paul a dirty, dirty Protestant), and Paul is forced to leave. Zena gets closer to what she wants from him, but even drunk in his despair, Paul maintains is virtue.

Meanwhile, we learn that Dracula’s revenge is going to happen by him despoiling and killing (and possibly vampirising) Maria. He starts this by attacking Zena and putting her in thrall to him. The rest of the movie will involve what happens with Zena, Dracula’s attacks on Maria and the monsignor, and, naturally, Paul’s inevitable return to Catholic Christianity, because we certainly can’t have him ending the film as an atheist (or a Protestant).

Where Dracula Has Risen from the Grave works is in some very interesting moments in the film. Getting atheism right, for instance, is a huge plus for me. There are a few others as well. The priest attempts to break away from Dracula’s enslavement, but neither he nor Paul can sufficiently pray to complete the actions that will kill Dracula. I rather liked that, because the two men are coming at this from very different positions.

The moment that really sells the movie to me, though, involves Zena. Dracula makes it clear that he wants Maria. The audience knows that this is purely based on his desire for revenge, not on his desire for her specifically, but Zena does not know this. Having been repeatedly rejected by Paul in favor of Maria, Zena is horribly hurt by the fact that someone else has rejected her. Her reaction is extreme but completely believable, and I like that the movie had the presence of mind to include this as a part of her character. There’s also a really nice scene of reconciliation between the monsignor and Paul, and it fits in well with both characters.

I was not really expecting a great deal from this. As the fourth film in the Hammer Dracula cycle, I don’t think that’s too surprising. The truth is that it’s a far better movie than it’s position as a fourth in the series would indicate. It’s refreshingly dark, and it really does base its plot on the characters rather than the plot itself.

Why to watch Dracula Has Risen from the Grave: There are some moments of surprising depth here.
Why not to watch: As tends to be the case, atheism is seen as a problem.

Email ThisBlogThis!Share to TwitterShare to FacebookShare to Pinterest
Labels: Dracula Has Risen from the Grave, Freddie Francis, horror