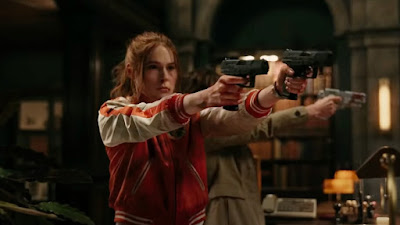 I think we could make the case that in the last decade or so, the action movie has essentially been perfected. There are great action movies from the past, of course, but films like John Wick, Dredd, The Raid, Mad Max: Fury Road and more are precisely what is wanted from an action movie. Fury Road was the realization of that for me; I went in wanting two hours of car chases and explosions and, counting credits, that’s what I got. There are others that walk in those same circles, even if they aren’t quite there. Wanted and Taken, for instance, play in that same hyper-action field. The Kingsmen series fits in there, as does the underseen The Man from U.N.C.L.E. Atomic Blonde is essentially a James Bond film with a woman in the lead role. And into this crowded room of gunslingers and assassins walks Gunpowder Milkshake.

Based on what I have called this review, it won’t be a huge surprise to anyone that this is very much a woman-driven version of John Wick, although there are big nods to Wanted as well. Like both of those films, we are deep in a world of a secret cabal of assassins. In this case, it is a shadowy organization called The Firm. Scarlet (Lena Headey) is one of their top assassins, but she gets into some trouble and is forced to make a quick disappearance, leaving her daughter Sam (eventually played by Karen Gillan) in the care of Nathan (Paul Giamatti).

Years later, it’s no surprise that Sam is now an assassin for The Firm, and like her mother, she has gotten herself into some trouble. One of the conceits of this world is that unlike the assassin hotels in John Wick there are other safehouses. A diner is used as a meeting place and a library is used as a weapons storehouse. We’re going to spend some time in both of these places—Sam’s last job was messy, and she needs to exchange her weaponry. This is where we meet the librarians: Madeleine (Carla Gugino), Florence (Michelle Yeoh), and Anna May (Angela Bassett). For whatever reason—probably because we need the woman equivalent of a dick measuring scene, the three don’t know who Sam is, but eventually things work out.

Ultimately, Sam is sent off to kill someone who stole money from The Firm. She shoots the guy but then finds out he stole the money because his daughter has been kidnapped. Now Sam takes it upon herself to save the girl, and hopefully still recover the money. Naturally, bad things happen and the money becomes unrecoverable. And, it turns out that in her last job, she killed the son of a local crime kingpin. So, the mob wants her and The Firm wants her, and Sam is stuck guarding an eight-year-old (eight and three-quarters) girl named Emily (Chloe Coleman).

I’m not going to ask if this film is necessary. First, I don’t want to go down that rabbit hole (“Honestly, what film is really necessary). More importantly, though, I get that things like representation matter. The old Hollywood truism is that both men and women watch movies about men, but only women watch movies about women. Gunpowder Milkshake is very clearly trying to tap into the John Wick crowd, a film and series that has plenty of women who are fans. That said, it does have the feel of being exactly that—essentially a John Wick clone with a female cast.

“But why?” I have to ask. I have absolutely nothing against women-led films or even women-oriented films. But this film, with very few changes in the script, could have been made with an entirely male cast. And so I am more or less forced to ask what the point of it is. There needs to be something here that makes it significantly different in some way other than a chromosome. Atomic Blonde wouldn’t work with a male lead. Annihilation and The Descent are not the same film with a male cast. Gunpowder Milkshake is essentially the same film if it’s gender swapped.

Don’t get me wrong; this is a fun film to watch and I enjoyed watching it, even if for some reason I tend to get Carla Gugino mixed up with Valeria Golino. But I wanted something to make these characters indelibly who they were. Birds of Prey works because it’s a cast of women, not incidentally. Oceans 8 doesn’t work with a male cast. Is it too much to want the same thing here?

It may be the source. I mentioned not that long ago that Promising Young Woman was a more interesting woman revenge film because it wasn’t specifically written by men for a male audience. It was subtle and smart and believable because of it. I wanted the same thing here. I enjoyed my time with this, but I really wanted this to be more memorable than the film that I got.

Why to watch Gunpowder Milkshake: It’s exactly what you want in an action movie.
Why not to watch: Aside from gender, you’ve seen this before.