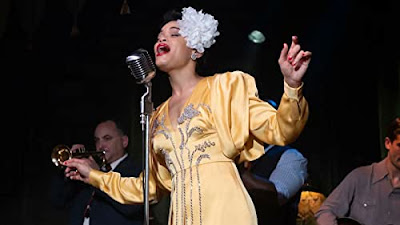 I believe that in the past, probably on my review of Breathless, that I have mentioned my parents’ past history with Jean Seberg. I bring this up because Jean Seberg was targeted by name by J. Edgar Hoover and the FBI because of her support for the Black Panthers and other causes that were deemed radical by society at the time. How does this connect to The United States vs. Billie Holiday? Because that is the essential point of this movie. While perhaps not all of Lady Day’s problems stemmed from the persecution she suffered at the hands of Johnny Law, a hell of a lot of them did, and plenty of them were trumped up and designed to make her comply.

So what was the issue? Billie’s rampant heroin use was what the Feds focused on because it was a tangible issue that could be brought to bear against her. The truth is that the government wanted her silenced because of the song “Strange Fruit,” about lynchings in the American South. The song, we are told, is a rabble rousing song, one that gets people ready to protest and fight, and the government didn’t want that. And so, Billie Holiday became the scapegoat for anything the government could think of. They also planted drugs and paraphernalia or her more than once.

While we spend a little bit of time in Billie’s childhood by way of flashback, most of the film is told in the present, from Billie’s heyday to her time in prison, her release, and the struggles she faced afterwards. Much of what happens is told with the storytelling conceit of being in the context of an interview between Billie Holiday (Andra Day) and radio interviewer with the staggering name of Reginald Lord Devine (Leslie Jordan).

A lot of our time will be spent with Jimmy Fletcher (Trevante Rhodes), the federal agent who first infiltrated Billie’s inner circle and then called the narcs on her. Fletch works directly under Harry Anslinger (Garrett Hedlund), who is the driving force behind any persecution suffered by Holiday. Fletcher eventually feels that he is being used for things he doesn’t believe in and begins to empathize with her. And, even further into the future, he becomes the man that she depends on.

There are a few things that need to be talked about here. The first is that Andra Day is not primarily an actor but a musician. She dives head-first into this role, though, and she is brilliant in it from start to finish. She is fully committed to giving a dedicated performance as Holiday, up to making her own voice gravelly and rough to duplicate Holiday’s signature style. Considering just how good Day’s voice is, this is a huge commitment, indeed.

And, then, of course there is the music. One of the benefits of casting someone like Andra Day in the role of a great singer is that Day herself is a great singer. Everything that we hear is truly her singing. These songs are timeless and just as good now as they were 70 years ago. “Strange Fruit” is naturally the centerpiece, but there are some other true classics here.

I don’t have a lot to say about this film. The biggest issue that I have with it is that this is an unpleasant story. Billie Holiday was the type of singer who was abused at every turn. The people who hated her, like Anslinger, hated her as much as they could simply for standing up for the rights of herself and others. And that could almost certainly be handled by most adults, but she was just as attacked by the people who were supposed to love her. All of her relationships seemed to go sour after a time, and many of them were filled with abuse, physical, mental and emotional.

This is the kind of movie about race that Oscar should be looking at. I say this knowing that Green Book won Best Picture a couple of years ago despite not really earning that nod. Oscar tends to like safe movies about racism like Green Book and Driving Miss Daisy and ignores the movies that show it in its true nastiness. This is not a lesson that most of us really need to learn these days, but it is one that demands to be continually repeated.

But it is also the kind of story that deserves to be told more coherently. Lee Daniels seems often to have intentions better than his skills. There is a great movie here somewhere, but this story, while important, should be told in a way that feels less generic. The text that plays just before the credits is in many ways the most meaningful part of what we see.

It's a reminder that Oscar does sometimes go far afield when it comes to its nominations. The United States vs. Billie Holiday earned the nomination it deserved--this is all about Andra Day.