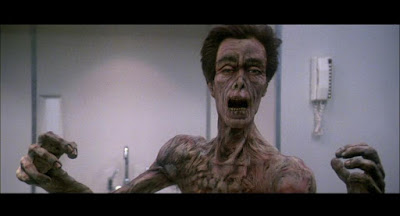 Stop me if you’ve heard this plot before. A group of human space travelers find an alien spacecraft that appears to be filled with the bodies of dead alien life forms. It turns out that the alien creatures aren’t as dead as believed, and they wake up and start feeding on the humans, frequently by literally hiding inside of them. Sounds a bit like Alien, no? Well, in this case, it’s Lifeforce, and while this was based on a book called “The Space Vampires,” the screenplay was written in part by Dan O’Bannon, who wrote Alien.

Lifeforce, while vastly different from Alien, has a great deal in common with it. It’s also got a lot of things that Alien doesn’t have. Primarily, it has Mathilda May, who spends the vast majority of her seven or so minutes of screen time completely nude. Frequent readers of this blog will note that I’m not a gorehound when it comes to horror movies. I’m similarly not a sexhound. It’s hard not comment on it because it often seems like the entire point of the film.

A group of astronauts take a Space Shuttle-like craft to explore Halley’s Comet. What they find is a massive spacecraft, 150 miles long, hidden inside the corona of the comet. Upon exploration, the away team finds a bunch of bat-like alien life forms. They also find three human-appearing bodies in sealed cases. These three appear to be completely normal, albeit nude, humans (Chris Jagger, Bill Malin, and Mathilda May).

We doodley-doop a month forward in time and discover that the space shuttle has returned to Earth orbit, but everyone onboard is dead. What’s brought back with the rescue mission are the three nude bodies, since the astronauts themselves are nothing more than desiccated husks. And, while preparations are being made to examine the bodies, the woman (referred to for the rest of the movie generally as Space Girl) wakes up and feeds off one of the guards. This feeding turns the guard into what looks a lot like the early stages of an unwrapped mummy. She, using her nudity and scary powers, walks out of the facility. Worse, two hours later the guard sit up and drains the life out of one of the doctors about to perform an autopsy.

Essentially, what we have is a trio of energy vampires who suck the life out of their victims. Those victims then sit up a couple of hours later and repeat the process. If they don’t keep feeding, they die, dry out, and sometimes explode. Now, the one survivor of the shuttle, Col. Tom Carlsen (Steve Railsback) and Col. Tom Caine (Peter Firth), a British military agent, must do what they can to stop the vampires. Carlsen is connected to Space Girl, but he managed to escape—he’s more or less complicit in the death of his crew, but now is possibly the only one who can save the world.

There’s a lot to recommend in Lifeforce. There’s an interesting cast, for instance, including Frank Finlay as a doctor who helps with the initial investigation of the vampire creatures and Patrick Stewart as the director of an insane asylum. There’s also an extended sequence that shows the geometric progression of the vampire plague. With the male vampires becoming active and each creating a new energy vampire every couple of hours, then each of those doing the same, very soon London is overrun with a plague of vampire creatures desperate to drain the life force of anyone they can find. This is a lot of fun, and one of the better parts of the film.

But I’m not kidding when I say that Lifeforce is really about the rather blunt and frank nudity of Mathilda May. May was 18 or 19 when this film was made, and didn’t speak a word of English; she had to learn her lines phonetically. And no one cares, because she is just…walking around starkers for most of her time on camera. When I say this is the point of the film, I’m not kidding. Evidently, Tobe Hooper had to be restrained from forcing her to shave off all of her body hair, and frequently inspected her to make sure that her pubic hair was at a minimum.

In that sense, Lifeforce reminded me of Baby Blood. Emmanuelle Escourrou spent most of that movie nude as well. In that, her nudity was sort of like a blunt fact and not particularly sexual. That’s not the case here, where May’s nudity is entirely sexual.

There’s some fun ideas here. Even without the nudity, there are some interesting ideas, including the idea that the space vampires are the source of the vampire myths around the globe, and that they show up every 76 years with Halley’s Comet. There are some really fun practical effects, too. They don’t look that realistic now, but I would imagine in 1985 they looked amazing.

I want to talk for just a second about Pluto TV. This is the first I’ve used it. It’s not bad, although it does come with a lot of ads. It also rolls the ads into the run time of the movie. Lifeforce runs 116 minutes, but according to Pluto, the 25 minutes(!) of ads rolled in put the running time at 2:21. I don’t mind the ads that much, but the same three or four ads every fifteen minutes feels a bit too much.

Why to watch Lifeforce: Sexy, hot, vampire action.
Why not to watch: This is almost literally Alien with vampires instead of xenomorphs.