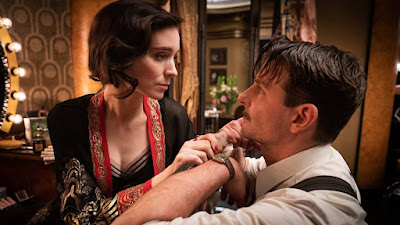 I went into Nightmare Alley with high expectations and a good amount of trepidation. Why? The expectations come from the fact that Guillermo del Toro is my favorite working director by a large margin. He’s one of the few directors of whom I have seen everything and will continue to see everything that he directs. One the other hand, this feels like a departure from del Toro’s oeuvre, similar in some respects to Crimson Peak, but without the supernatural attachments. Also, I love the original 1947 version of this film and I was worried that this might not live up to it.

I’ll drop the opinion here so that you can jump to the end if you want to avoid any spoilers. Nightmare Alley is being touted as not a remake of the 1947 film, but a new adaptation of the novel. This version is much more stylish in many ways, and it’s the sort of cast that anyone would dream of. It’s also substantially longer than the first film, adding a good 40 minutes or so to the running time (although, admittedly, much of that is credits). I like the film, but it does feel bloated to me, and I think it would be a better film with a trim of 20-30 minutes. That said, I’m not sure what I would trim.

This is the story of a man named Stanton “Stan” Carlisle (Bradley Cooper), who, we see in the film’s opening, is placing a body underneath the floorboards of a farmhouse and then lighting the house on fire. From that disturbing opening, Stan wanders until he joins up with a carnival, more or less making himself useful until he’s offered a full-time position. He earns this when the sideshow geek escapes and Stan helps rein him back in. This is also where Stan starts to get his education in the world of the carnival. He will have a number of useful teachers.

Among these are Clem Hoatley (Willem Dafoe), who runs the carnival and teaches Stan the basics of the life. It’s also here that Stan meets Molly (Rooney Mara), a carny who does an act where she is shocked by electricity to the thrill of the crowd. Stan also learns a great deal from Zeena (Toni Collette) and Pete (David Straithairn), who have a mentalism act that involves a complex code to determine what objects audience members are holding up. Pete has descended into alcoholism, though, and this gives Stan the idea of collecting their codebook and creating his own act with Molly. This means going through Molly’s protectors, Bruno (Ron Perlman) and The Major (Mark Povinelli). It is greatly assisted when Stan provides Pete with a bottle of wood alcohol—accidentally, perhaps but perhaps not—instead of grain alcohol. With Pete dead, Zeena’s act is dead as well, and Stan and Molly head off on their own.

Their own involves a mentalism act that wows the crowds of Chicago. This also brings them in contact with Dr. Lilith Ritter (Cate Blanchett), a psychiatrist who wants to put Stan to the test at the behest of one of her clients. Stan learns that the people in question (Peter MacNeill and Mary Steenburgen) have lost their son and are looking for closure. Despite being warned over and over against doing a “spook show,” Stan sees dollar signs. Dr. Ritter knows it’s all a scam, but she sees the same dollar signs, and thus the two are in business together.

Much of the second act revolves around Stan’s attempt to swindle a man named Ezra Grindle (Richard Jenkins), who has a violent and troubled past, but also has the money to make those problems go away. Grindle is searching for some forgiveness for a past action, and Stan sees a way to make a fortune. But as he reaches for this fortune, the walls start closing in.

Nightmare Alley is not an homage to noir films from the ‘40s; it is a noir film that just happens to be in color (and there is a limited release black-and-white version of it). It’s a film that runs very dark in its themes and its reality, and the closing few minutes are, thanks to the lack of an uplifting coda, more devastating than the original film.

But which version is better? It’s hard to say. I like just how bleak this version is at the end—the time required that the first version give the audience some small measure of hope at the close and we’re under no such constraints here. But the original is much more efficient. There’s a backstory here for Stan that, while interesting, doesn’t seem to be that important in the overall scheme of the film. Were I to make some cuts, I think most of those would be Stan’s past in the farmhouse and everything that happened there. It’s a bit of texture but nothing more, and the film wouldn’t be much less without it, and would be tighter and more streamlined.

It’s a very different film in a lot of ways from what del Toro normally does. It’s very much worth seeing as well, if only for this amazing collection of talent; even the bit parts are frequently recognizable actors. Just be prepared that you’ll want a lie-down after it finishes.

Why to watch Nightmare Alley: Guillermo del Toro does noir, and that’s a perfect combination.
Why not to watch: The original version is tighter.