I'm in Love with My Car

Films: Titane
Format: Streaming video from Hulu Plus on Fire! 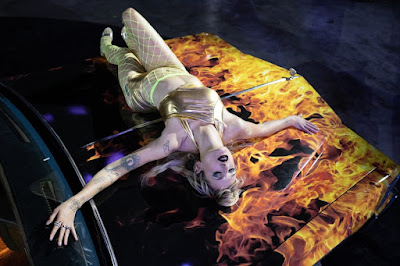 At some point while I was watching Titane, I came to the realization that if David Cronenberg was French, this is a movie he would have made. There are elements of a lot of his work here. You can find hints of Shivers and Crash, a little dose of The Brood and a handful of Dead Ringers. But this isn’t Cronenberg; it’s Julia Ducournau and this is just her third feature-length film. There’s been something in the water lately; there are a lot of films coming out from directors with not much of a resume that have been shockingly mature.

Titane has done well on the festival circuit, walking away with the Palm d’Or from Cannes, which makes it something to be seriously considered. I knew little about it going in, and that was intentional. I haven’t seen Ducournau’s previous film Raw yet, but I know it’s reputation. I went into this eyes open in terms of expectations of body horror, but beyond that I didn’t really know what to expect.

We start in the past where young Alexia (Adele Guigue) is acting up in the car with her father (Bertrand Bonello). When she take off her seatbelt, he turns around to yell at her and crashes the car. Alexia is wounded in the crash and comes out the other side with a titanium plate in her head. She also appears afterward to be unnaturally attracted to the family car.

Flash forward a number of years and now Alexia (Agathe Rousselle) works as a car model where she essentially mimics having sex with the car to get attention. We also find out soon enough that Alexia is a serial killer who prefers to use a large hairpin. She demonstrates this when a fan gets a little too close to her. We also discover that her evident love of cars is not theoretical. Things become more complicated when it’s evident that Alexia is pregnant…from the car.

It's not clear if this realization triggers something in Alexia or if her murder spree simply reaches a fever pitch, but she attends a party with some coworkers and friends and kills all of them but one, then proceeds to return home to her parents, locks them in the house, and lights it on fire. Now outed as a serial killer, Alexia decides to change her appearance and fade away. She opts to go undercover as Adrien, a young man who has been missing for 10 years. She bears a close enough resemblance to an aged-up version of him, and soon finds herself in the company of Vincent (Vincent Lindon), a steroid-addicted firefighter who is unsure of how to deal with this new version of his missing son.

I’m not going to go further than this into the plot. Titane is not really a film that you watch for the plot. You watch it for the astonishing bizarre ideas and the commitment to body horror. The plot honestly doesn’t make a great deal of sense, but it doesn’t matter. Why is Alexia a serial killer? This isn’t central to the plot aside from the fact that it forces her to adopt a different identity. How does she get pregnant from a car? It doesn’t matter any more than it matters how Regan MacNeil became possessed or how the Force binds the universe together.

The biggest takeaway, though, is the absolute buy-in from both Vincent Lindon and especially Agathe Rousselle. If it is shocking that this is Ducournau’s third feature-length film as the director (and only second for cinematic release) it is perhaps even more shocking that this is not only Rousselle’s first starring role, but her first role in a film of feature length. She is completely bought in to this role, though, and committed to every disturbing bit of what happens on the screen.

Titane is not a pleasant film, and not one I’ll want to watch again any time soon. It is a particularly disturbing vision, Cronenberg making Donald Cammell’s Demon Seed, perhaps, or a French automotive version of Shin’ya Tsukamoto’s Tetsuo: The Iron Man. For all of its narrative insanity, it is a film that is determined to be upsetting and horrifying as it can be and in every way that it can be. And for that, it might well be more brilliant than it had any right to be at first glance.

Why to watch Titane: Holy shit!
Why not to watch: No, really. Holy shit!