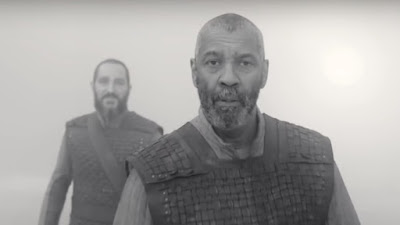 The Tragedy of Macbeth was one of the reasons I wanted Apple TV. I like most of the movies that involve a Coen brother (Ethan Coen evidently deciding he wants a break from movies). I also happen to like Macbeth; it’s my favorite of Shakespeare’s plays. I like how efficient it is. Sure, Hamlet is a masterpiece, but it’s also eternal. Macbeth has a huge body count and it’s about half as long. The fact that saying “Macbeth” in a theater is supposed to be bad luck doesn’t phase me a bit; it just adds to the cache of the story.

The Tragedy of Macbeth is deeply stylized. That’s always going to be the case with something modern that is filmed in this high-contrast black-and-white. But it’s more than that. There is very much a sense of unreality here, of the film happening in a sort of liminal space that doesn’t actually exist in the real world. It’s like the Platonic ideal of a Shakespearean tragedy. The entire film was shot on soundstages, which adds to the surreality that the film presents.

I honestly don’t know how much detail I should go into with the story here. If you don’t know Macbeth as a story, that’s on you. It’s only one of the great plays by the greatest playwright in the history of the world. That being the case, I’ll go into the story a bit, assuming most readers will know the basics. That also means that I’m not going to necessarily shy away from spoilers, especially since at least one of the great spoilers is referenced in The Lord of the Rings in a manner of speaking.

The story involves King Duncan (Brendan Gleeson) learning that a battle that essentially determined whether or not he was going to survive on the throne has broken his way, mainly because of the efforts of Macbeth (Denzel Washington) and Banquo (Bertie Carvel). This news also pleases Malcolm (Harry Melling), Duncan’s son and heir. Meanwhile, Macbeth and Banquo, on their way to see the king, encounter a trio of witches (all played by Kathryn Hunter) who make predictions. Those include that Macbeth will soon be named the Thane of Cawdor, that he will soon be king, and that Banquo’s children shall reign as kings after Macbeth.

Macbeth naturally tells his wife (Frances MacDormand) about the predictions, and since Duncan is staying in Macbeth’s castle, this presents what she sees as the perfect opportunity. She convinces her husband to murder the king and blame the crime on his guards. He does so, and with the murder, Duncan’s sons Malcolm and Donalbain (Matt Helm) flee, worried for their own safety. But this also makes them look guilty, and soon enough Macbeth is indeed named king, just as the prediction says.

But the power makes him paranoid. He soon sends murderers after Banquo and Banquo’s heir (Lucas Barker), and when the noble Macduff (Corey Hawkins) appears as a threat, he sends killers after his family, murdering Macduff’s wife and children. Macbeth’s grip on sanity gets shakier; Lady Macbeth loses her grip entirely. But Macbeth’s paranoia is soothed slightly when he is told several more predictions. First, he is told that he cannot be killed by any man born of a woman. Second, he is told that he will reign until the forest of Birnam Wood marches on his castle at Dunsinane. And, naturally, were going to have to find ways to make those things happen by the time the curtain drops.

The text here is, from what I know, essentially the text of the play. Not a lot has been done in terms of adapting the actual play into something else; the movie is instead about this experience of watching this version of the story. Since a great deal is done to make this feel essentially detached from the world, this is not hard to achieve.

I very much like that The Tragedy of Macbeth has opted for race-blind casting. We don’t typically think of Shakespeare (or 11th Century Scotland) as having a large Black population, but you wouldn’t know that based on the cast. This style of casting makes a great deal of sense in a modern world, and it’s effective, because this doesn’t affect the story a bit.

Here's the thing: I’ve railed against style over substance productions before, and if you didn’t know better, The Tragedy of Macbeth looks like that kind of animal. But the story that we have here is one that has a great deal of substance going in. That being the case, there is a great deal that can be done with the style that doesn’t detract from the story, but that enhances it. Giving the witches a true otherworldly quality is a part of that. The stark cinematography is a part of it, too. When you have this much meat on the bone to work with, it behooves you to go for something more interesting with how it is presented.

I have a feeling this film will be divisive, but I thought it was tremendous.

Why to watch The Tragedy of Macbeth: Because it’s Macbeth.
Why not to watch: You’re one of those “I don’t understand Shakespeare” pepole.