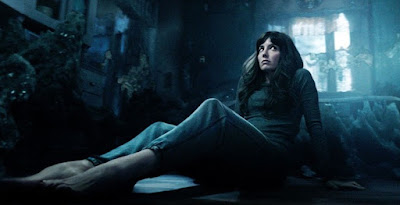 James Wan has and an interesting career as a director. He made his bones with horror movies, but he’s branched out with films like Furious 7 and Aquaman. Malignant is a return to his horror roots, but it’s evident as the film winds up that he’s changed in terms of what he sees as his vision for a horror movie. Don’t mistake me—this is very much a horror movie. But, there are a couple of action sequences/battle scenes that, aside from the body count, wouldn’t be out of place in a comic book-inspired actioner.

We start with a scene at a hospital where a patient has broken out of confinement and is attacking (and killing) people. Eventually, the patient in question is tranquilized and the doctor in charge (Jacqueline McKenzie) intones ominously that it’s time to excise the tumor. We’re going to doodley-doop a good 25-30 years and we’ll meet Madison Mitchell (Annabelle Wallis), who works in healthcare, is pregnant, and is in an abusive relationship. Her husband Derek (Jake Abel) pushes her into a wall and runs out; Madison locks him out of the room. That night the electronic devices and lights in the house go a little crazy and Derek is brutally murdered while Madison herself is attacked by something.

What’s going to ultimately be the story of the film is that Madison is going to “see” a series of terrible murders taking place. For her, it’s as if she is actually in the place where the murder is happening. This is naturally going to be seen as very suspicious by the police officers brought in on the case, Kekoa Shaw (George Young) and Regina Moss (Nichole Briana White). Madison’s sister Sydney (Maddie Hasson) gives her sister full support, but there are increasing elements that suggest that Madison is actually guilty of the crimes that are being committed, something that becomes impossible for her to deny when a potential victim (Jean Louisa Kelly) is found tied up in her attic. We in the audience, of course, are pretty sure that this is not the case and that something else is going on.

Eventually, everything will be made clear, of course, but that’s also spoiler territory and I’m not going to go there. As we move toward the bizarre climax to Malignant, a few things become clear. First, there is some very inventive work with the way some scenes are created. Madison is in her home, but is stricken by a vision, and the home around her morphs into the scene of the next crime. It’s pretty cool. There are some very good camera shots as well—Wan uses the camera in deliberate and inventive ways.

An issue is something I said at the top. Wan has gotten back to his horror roots with Malignant, but he hasn’t come all of the way back. There are straight-up action sequences in this, including a couple of very violent fight scenes that approach but do not reach the church sequence from Kingsman: The Secret Service. While “cool” in the way that any well-choreographed action sequence is, they feel completely out of place in a movie like this. The larger of these sequences especially feels completely gratuitous and unrealistic. Based on what we know at that point of the killer, these particular feats seem beyond their capacity.

But this is an inventive idea. Oh, sure it relies on a few classics and tropes. There are plenty of movies that you’re going to see in the process of watching Malignant, but this does things pretty well overall, at least through the first two acts. It drops the ball hard, though, and not just because of the action sequences. The actual ending is fairly maudlin and feels unearned. Worse, there are a lot of threads that are left untied here. Far be it from me to demand that a film with a weak third act go longer, but a final couple of minutes to tie up those loose ends would be very welcome, and it wouldn’t take much more than a single 2–3-minute scene.

I honestly wanted to like Malignant more than I did. It’s not bad and there are some quality gore moments in it (as well as some scenes of surgery—you’ve been warned). There are a couple of good shocks in it as well, not when you see the killer but when you see exactly what happened in the hospital. That raises the film a full star in my opinion. Unfortunately, the punked ending and weak third act drop it by a full star as well.

Why to watch Malignant: It’s hard to pigeonhole.
Why not to watch: It inexplicably becomes an action movie.