Maybe She's Born with It, Maybe It's the Holy Spirit 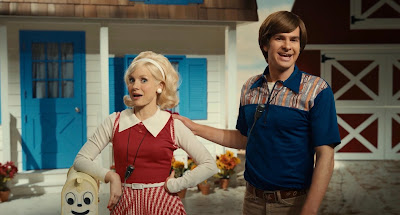 If you’re of a certain age, you remember Jim and Tammy Faye Bakker as the punchline of a lot of jokes. The Bakkers were at one point the premiere televangelists in the country, with an entire compound of homes, an amusement park, and one of the largest broadcasting networks in the world. Jim was overly pious and smarmy and Tammy Faye was noted for extreme makeup and for a lot of runny mascara when the waterworks started. And then they lost it all when Jim got caught in some affairs, not exclusively heterosexual. Well, these days, Jim Bakker is back on television hawking buckets of food to prepare for the Rapture. Tammy Faye died 15 or so years ago from cancer, and for as crazy as her persona was, she managed to do at least a little bit of good in her life. All of this said, I can’t say I was looking forward to her biopic, The Eyes of Tammy Faye.

This isn’t going to quite be a warts-and-all biopic, but there will be warts enough. We learn that the young Tammy Faye (Chandler Head as a child, and then Jessican Chastain) was something of a pariah in her own family since she was the child of her first mother’s first marriage, the equivalent of a scarlet letter for their Minnesota community. Eventually, Tammy Faye heads off to college where she meets Jim Bakker (Andrew Garfield). The two get married despite it being against the rules of the college. From there, they head off doing ministry on the road, mainly to kids and using puppets created by Tammy Faye.

In what will be something of a theme, Jim overspends and gets them in money trouble. They are saved by meeting Pat Robertson (Gabriel Olds) and Jerry Falwell (Vincent D’Onofrio). The Bakkers go on to found The 700 Club, still the cornerstone of Robertson’s television ministry as well as perform a children’s ministry show on Robertson’s network. Realizing that Robertson is filthy rich and they are seeing none of it, the two split off on their own, forming the PTL (Praise the Lord) Network, which is where all of the craziness—drugs, adultery, staggering money issues, fraud, and more—hops into overdrive.

I won’t spoil the details here; a lot of this is public record anyway and you can find out for yourself. I watched this specifically to address the performance of Jessica Chastain as Tammy Faye, since that’s the Oscar nomination I care about (and I imagine it’s the frontrunner for the hair and makeup Oscar).

To be truthful, this is one of those performances that is really difficult for me to judge fairly. I have no doubt that Chastain is genuinely good enough in this role to warrant an Oscar nomination, but Tammy Faye is one of the single-most annoying human beings I have ever encountered in a film in my life. Everything she says, everything she does, is accompanied by a little girlish giggle that is mildly annoying at first and slowly builds into the annoying and horrible center of her entire personality.

But that said, and don’t underestimate just how much that giggle will live in your brain, Tammy Faye isn’t a truly terrible human being. What she is, and what Chastain brings to the role, is naivety. Tammy Faye is in many ways an innocent. She is also a true believer, which is something I have always wondered. Certainly some in the televangelism game really are true believers while others are not. I can’t speak to Bakker, Robertson, Falwell, or many of the others, but for all of her faults, Tammy Faye Bakker appeared to be a true believer in her religion. While she may have done some awful things and had worse done in her name, but in some ways her religion made her better. She was, for those faults, a defender of the LGBTQ community, and was so to her dying day. Chastain brings a lot of that to the role and makes it believable.

It's worth saying that the whole movie is cast very well. Seeing this, I think it’s entirely possible that Andrew Garfield might well move up in the rankings for Best Actor. Were he not nominated for tick, tick…BOOM! I could well see him nominated for this, either for Best Actor or in a supporting role. He’s that good and that’s kind of surprising to say, since I don’t really consider myself much of an Andrew Garfield fan. I’m also a fan of Vincent D’Onofrio in general, so it’s nice to see him here. As a final note, Cherry Jones as Tammy Faye’s mother, gives a tremendous performance in a role that is difficult in tone.

It's a personal bugaboo of mine that a lot of Best Actress nominations are for roles that are not in Best Picture-nominated films (like all five from this year, as it happens). In this case, The Eyes of Tammy Faye doesn’t deserve a Best Picture nomination, but I might be convinced that Chastain deserves the nomination she got.

Why to watch The Eyes of Tammy Faye: Perhaps she wasn't as much a clown as we thought.
Why not to watch: Jesus, that giggle.