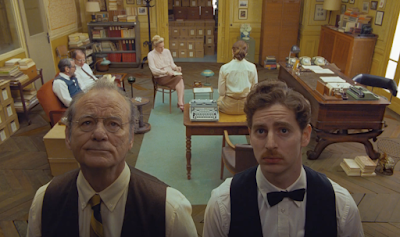 I like Wes Anderson. I realize that on a movie blog, admitting to being a Wes Anderson fan isn’t really coming out of any kind of intellectual closet. A lot of movie people—probably most movie people—have at least some respect for Anderson, whose movies always have a sort of handmade, bespoke quality to them. I have genuinely liked most of Anderson’s films that I have seen even if I have to be in a mood for them. Discovering The French Dispatch at my local library proved to be too irresistible a temptation, so I brought it home and popped it into the spinner.

And with that, I don’t really know where to begin. The French Dispatch isn’t so much a traditional movie as it is an anthology. We learn right away that the editor of a fictional magazine called The French Dispatch of the Liberty, Kansas Evening Sun has died. This editor, Arthur Howitzer, Jr. (Bill Murray) has run the magazine for years, starting when his father, the owner of the Liberty, Kansas Evening Sun sent him to France for some life experience. Arthur started the magazine, which is very clearly an homage to The New Yorker. We also learn that upon his death, the magazine was to be cancelled, people refunded their subscription money, and the presses melted down and destroyed, pending one final issue. The movie, then is that final issue—four stories and an obituary.

And that’s what we’re going to get. We’re going to get a series of, essentially, short films by Wes Anderson about the fictional town of Ennui-sur-Blasé. The first story is to give the audience some sense of the town in which the rest of this takes place, and the other stories will address art, politics, and food (and some other topics as well) before we get to the creation of the obituary of the late editor. The obituary itself is not really discussed, but the staff begin writing it as the movie ends. The four stories are:

The Cycling Journalist: A member of the staff (Owen Wilson) provides a bike tour of the city to show both its many changes and its many enduring qualities.
The Concrete Masterpiece: The art editor (Tilda Swinton) discusses the important work of Moses Rosenthaler (Benicio del Toro), an early force in the modern art movement and simultaneously a man imprisoned for vicious crimes and insanity.
Revisions to a Manifesto: A reporter (Frances McDormand) fails to be completely neutral when French students revolt, initially over access to the girls’ dormitory but eventually on forced military service.
The Private Dining Room of the Police Commissioner: The food reporter (Jeffrey Wright) discusses his meal with the local police commissioner that ended up involving the kidnapping of the commissioner’s son and a very particular meal made by accomplished cook, Lieutenant Nescaffier (Stephen Park).

And that’s it. The four stories have only the fact that they are in the final edition of the paper and the fact that they take place in roughly the same area to connect them. The film closes with our staff (the above listed and a number of others) discussing who should write the obituary and how they should go about it. The work begins as the credits start to roll.

Anderson, of course, can get virtually any actor he wants even for the smallest of roles. In addition to his normal troupe of actors (those listed above plus Jason Schwartzman, Saoirse Ronan, Adrien Brody, Willem Dafoe, Edward Norton, and Anjelica Huston), there are other big names here—Timothee Chalamet, Lea Seydoux, Elisabeth Moss, Christoph Waltz, Bob Balaban, and Henry Winkler among others—for roles of various sizes. Anderson can get anyone he wants, it seems, for anything he is doing.

But that doesn’t make me like the film, and The French Dispatch is right on that knife edge of deciding whether or not I like it. I suppose I just barely come down on the side of liking the film, but I wished for a lot more from it. It comes across to me (and I am very much in the minority on this) as being too much Wes Anderson. He’s out-twee’ed himself. I expected a certain amount of kitschy charm and found very little of it, and that’s sad.

Years ago, Saturday Night Live did a parody trailer of a Wes Anderson horror film called The Midnight Coterie of Sinister Intruders. It’s a send up of Anderson’s style in the guise of a horror film. And it hits the perfect note. The French Dispatch comes across as someone else trying to do Anderson and doing it well, but not perfectly. The fact that it switches between color and black-and-white is a part of this. I’m ultimately disappointed.

Why to watch The French Dispatch: It is, after all, Wes Anderson.
Why not to watch: It’s so much less than it should be.