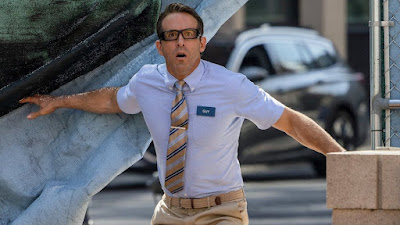 I am of two minds when it comes to Free Guy. A part of me is tempted to see this as exactly what most people are going to see it as. It’s a comedy with a lot of action elements that is based in large part on current multi-user online games like WarCraft or Grand Theft Auto. However, there is something much deeper here if you want to see it. I have no idea if this was intentional or not, but the heart of Free Guy is one of the great existential questions, perhaps the greatest existential question. All good science fiction ultimately asks questions about humanity. Free Guy asks this question, but more important asks the question of whence comes free will, or if free will even exists.

I’m not going to get too in depth with the idea of the nature of free will. This isn’t that kind of a blog. I will refer you to Daniel Dennett’s book “Elbow Room: The Varieties of Free Will Worth Having” as an interesting place to start on the philosophical idea of free will. But, it’s impossible to get away from this when you understand what the plot is about. Bluntly, Guy (Ryan Reynolds) is an NPC in a massive online game that is very similar to the GTA games. Players show up and commit crimes, blow things up, shoot and attack pedestrians, and more. Guy works at the bank with his friend Buddy (Lil Rel Howery). Naturally, the bank is regularly robbed by the players, but for Guy, Buddy, and everyone else, this is just normal, everyday behavior.

And then Guy sees a player named MolotovGirl (Jodie Comer) and he is instantly smitten despite being an NPC. And with these feelings now growing inside him, Guy starts to do things differently, breaking out of his programmed script. In the real world, MolotovGirl is actually Millie. Millie, along with her former partner Keys (Joe Keery) once created a fishbowl game that was stolen by a guy named Antwan (Taiki Waititi) and used to make Free City, the game in which Guy lives. Millie is working on a lawsuit against Antwan while Keys works at Antwan’s company, helping her and attempting to find what he can in the game. Somewhere between Keys and Antwan is Mouser (Utkarsh Ambudkar), a friend and co-worker of Keys, but also a loyal employee for Antwan.

Much of the movie’s first act and much of the second is about this awakening of Guy wanting to help MolotovGirl/Millie because he feels compelled to. As he learns to live in his world not as an NPC but as a player suddenly able to level up and acquire items. In the real world, Keys and Millie slowly come to the conclusion that Guy is actually evolving because he is based on their original source code and that he might be self-aware enough to understand what is happening. And, they also realize that Antwan is about to shut down Free City, destroying it completely for his sequel.

So, yeah, there are some basic problems here. I spent enough time in the video/computer game world to know that anyone completely destroying his cash cow game for a sequel isn’t smart enough to lace his own shoes. You could still play Diablo on BattleNet almost 20 years after it was released and after there were multiple Diablo releases that could be played as well. If a company can turn a profit on something, they’re going to turn that profit, milking it for every dollar until it no longer makes financial sense. This would be the equivalent of shutting down World of WarCraft completely, destroying everyone’s account and all of the time they put into the game, and then trying to sell those same consumers on a newer version where they had to start over. Sure, this is what causes the tension in the movie, but it’s actually less believable than a free roaming AI in an MMORPG.

Plot and storywise, Free Guy has a scoop of The Truman Show and a hint of Groundhog Day stirred into a big ol’ pot of Tron and strained through Ready Player One. At the very least, it’s smarter than Ready Player One. Free Guy’s biggest plus is not the scintillating plot but the comedy. It’s funny, and while Taika Waititi is always a joy, it’s a much better movie when we are in the game. There are a lot of good jokes here, and the more you understand MMORPGs, the more these jokes are going to resonate. The problem is that it is really predictable. If you can’t figure out exactly where Free Guy is going to go and ultimately how it’s going to get there, you need to watch a lot more movies.

I enjoyed Free Guy quite a bit. There is the potential for this to be a lot more than it is in the sense that it could really be a look at the existential question of free will and of AI and more. But it doesn’t really want to go there and more than the hints it makes in that direction. And that’s okay. It’s really entertaining and there are a lot of really fun moments. But if you can’t figure out at least a part of the ending half an hour before we get there, you need to get off your phone and actually pay attention to it.

Why to watch Free Guy: It’s a lot of fun.
Why not to watch: It’s really predictable.

Posted by SJHoneywell at 2:38 PM