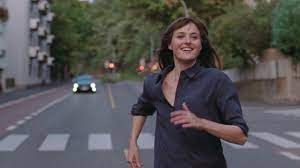 This doesn’t immediately result in infidelity, but in something like it. Julie crashes a party and meets Eivind (Herbert Nordrum), who is also in a committed relationship. Like Julie (who works in a bookstore), Eivind is underemployed (he’s a barista), and while neither is really interested in straying from their relationships, they are attracted to each other and willing to push the line of intimacy up to the point of physical contact.

Eventually, Julie and Eivind reconnect when he walks into her bookstore. At roughly the same time, Julie feels herself ignored by Aksel while he is concerned with a sanitized animated adaptation of his main comic creation. Eivind, meanwhile, feels overly oppressed by his girlfriend (Maria Grazia Di Mio) and her sudden awareness of global warming and the exploitation of native cultures around the world. And soon Julie and Eivind are a couple.

I won’t continue on the plot, such as it is, from here. A great deal of The Worst Person in the World is about a search not for identity in a world were identity is easily changed and therefore frequently meaningless, but about a search for meaning. Julie seems on the surface like a completely normal and rational, even likeable person. But so much of the film is about her inability to be satisfied with anything around her as well as her inability to make a choice on anything. Julie wants what she wants but doesn’t have the strength or awareness to actually verbalize those things. She can’t be satisfied with anything because she doesn’t really know what it is that she wants—only that she wants something other than what she has.

A great deal of the third act of the film deals with two independent but somehow related things. The first is Julie becoming pregnant despite both her and Eivind declaring that they don’t want children. The second is the news that Aksel has incurable pancreatic cancer, and that he is essentially living on borrowed time. All of this causes Julie to once again re-evaluate her life and what she wants, indicating that, as with much of the previous acts of the film, Julie has been treading water looking for the next thing to want without really wanting the thing that she already has.

The Worst Person in the World is beautifully filmed—the camera work here is fantastic and keeps things fresh and interesting. The middle sequence where Julie fantasizes about having a life with Eivind, her running to be with him and to speak with him while the rest of the world is frozen in place, is a masterclass of visual storytelling.

This is also an extremely well-written film. There are several places where the dialogue is incisive and significant in lines that are not really highlighted. Aksel, for instance, saying that he grew up in a world that shared culture through objects is a line that hit home for me. Aksel, dying while riddled with cancer, is mourning not only the loss of his own life but the loss of the world that he knew while living in the world that replaced it.

Why to watch The Worst Person in the World: Insightful and incisive.
Why not to watch: Calling this a comedy is just shooting itself in the foot.