The Title Really Needs an "s" on the End 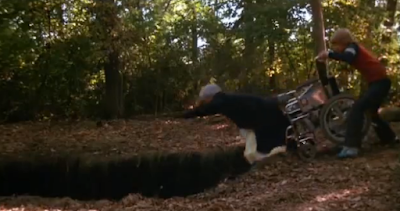 I am not the sort of person who revels in bad movies. I want the movies that I watch to be good movies, not shlock. I enjoy movies that challenge me and that have something to say. Movies that don’t have an internal logic or that feature ugly and stupid characters aren’t things that I enjoy watching because I don’t like “so bad they’re good” movies in general. I bring this up because The Pit is an aggressively stupid movie on a lot of fronts and is also loaded up with characters who are decidedly unpleasant. This is especially true of our main character.

In The Pit, we’re going to spend a great deal of time with Jamie Benjamin (Sammy Snyders), a friendless 12-year-old who is one of the most annoying main characters I have come across. Jamie’s parents are looking to move to Seattle, so they have to find someone to watch their weird kid. They decide on Sandy (Jeannie Elias), a psychology student from the local college. Because Jamie is a pubescent 12-year-old, he immediately falls in love with Sandy and doesn’t know how to react to her.

It's also the case that Jamie has discovered a pit out in the middle of the nearby forest. Inside the pit lives a group of creatures that Jamie calls Tra-la-logs. Over time, Jamie decides to figure out what these creatures like to eat. It’s not a shock to the audience (or shouldn’t be) that after trying chocolate bars, Jamie discovers that the creatures prefer to eat meat. Jamie feeds them by stealing Sandy’s money, but eventually decides that the way to do it is to take people he doesn’t like out to the pit in the forest and push them in.

And, naturally, this is where there are problems. Jamie isn’t that smart, and while he still manages to get about half a dozen people to fall into the pit in the forest, he’s not really smart enough to hide the crime very well. He bumps off the rude neighbor girl, for instance, but enjoys riding her bike around. He pushes an old lady in a wheelchair (who ratted him out for some bad behavior earlier) into the pit and then spends time riding around in her chair. It’s ridiculous.

But we need to talk about Jamie a great deal more. The fact that he’s not that bright isn’t specifically a reason to dislike him. Don’t worry, though, because there are plenty of reasons for us to dislike Jamie as a character. First of all, the kid has a voice that could cut glass. He whines constantly. He’s also the sort of kid who doesn’t know when to shut up. He’s mildly precocious, but not enough that it’s much of a character trait. He is desperate to be sexually aggressive as well and is completely inappropriate in doing so.

It also doesn’t help that Jamie is an absolute sociopath. He’s a 12-year-old kid who has conversations with his teddy bear (naturally named Teddy), and we get to hear those conversations as Teddy responds in Jamie’s head and in Jamie’s voice. Jamie is unbothered by killing half a dozen people around him and doesn’t seem to be concerned that there is a sudden spate of missing people because, for him, they aren’t missing. Jamie is completely unable to process that other people are concerned with what is happening because he is incapable of understanding that other people would have different ideas or experiences than he does.

The Pit also requires that almost everyone else in the film be a complete idiot. At one point, Jamie is so determined to see the local librarian naked that he calls her, trying to disguise his voice, and telling her that he has kidnapped her niece (who he later tosses into the pit) and makes her strip in front of her window so that he can take Polaroids of her. She does this (because of course she does), and she can’t recognize Jamie’s voice and she evidently doesn’t see the camera flashes when Jamie takes those pictures. And the local cops don’t really seem that concerned about investigating a threatened kidnapping followed by the girl’s disappearance a couple of days later.

I am willing to put up with a lot for a movie that is fun or entertaining. But I want a world that makes sense. I can accept a world with little meat-eating troglodyte creatures living in a pit in the forest, but I struggle with that world when there is so much that doesn’t make sense. The forest seems to be frequently traveled and the pit in question is literally on a pathway, but no one knows about it? Half a dozen people go missing and there’s not a sudden panic? No one seems to understand that literally everyone who has gone missing is at least tangentially connected to the weird kid who still talks to his teddy bear? Give me a break.

Why to watch The Pit: >shrug<
Why not to watch: Arguably the most annoying kid in any movie ever.

Posted by SJHoneywell at 9:34 AM