The Godfather of Fashion 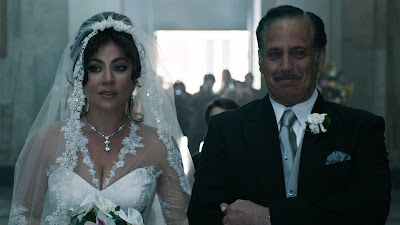 Before Oscar season this year, I expected House of Gucci to be on my list of Oscar movies. There was enough going on here that I thought there would be at least a Best Picture nomination. However, that’s not at all what happened. Instead, I’m watching this on my own because its lone Oscar nomination was for hair and makeup, a category I don’t address on this blog. Now that I’ve watched it, I have to agree with the Academy; this didn’t live up to the hype.

On the surface, House of Gucci is the story of Patrizia Reggiani (Lady Gaga) and her marriage to, divorce from, and eventual contracted murder of her husband, Maurizio Gucci (Adam Driver), the heir to half of the Gucci fashion empire. And, on the surface, it’s hard not to expect that there will be a lot here to like. The cast is a good one and this is helmed by the generally reliable Ridley Scott. Even better, House of Gucci is very much a mob film at its heart. There are a lot of parallels here to The Godfather films, for instance.

When the film starts, Patrizia crashes a party and meets Maurizio Gucci, who is a law student and the heir to 50% of the Gucci empire. Maurizio isn’t that interested in it, though, but he is interested in Patrizia. Maurizio’s father Rodolpho (Jeremy Irons) meets her and likes her well enough, but also (accurately) pegs her as a gold digger. He suggests that Maurizio never marry her, but he does. This causes a schism in the family and Maurizio exiled from the family.

Eventually, though, Maurizio is brought back into the family by the auspices of Aldo Gucci (Al Pacino) when he discovers that Patrizia is pregnant. Maurizio and Rodolfo eventually reconcile and Maurizio inherits but does so only because Patrizia forges Rodolfo’s signature on the document that reinstates the will.

What follows is a power struggle. Patrizia wants to take control of the company, but the 50% she doesn’t have is in the hands of Aldo and Aldo’s son Paulo (Jared Leto). Paulo is desperate to be seen as a designer, but he is incompetent and has no real vision for fashion. She and Maurizio use his pride to make him promises of his own line, and then shut him down when he tries to use the Gucci name. They also manage to get Aldo arrested for tax evasion in the U.S. Eventually, they arrange for some shares to be purchased by an outside company, giving them control.

But all of this comes at great cost. Maurizio realizes that his wife’s dealings are tearing him apart and he asks for a divorce. This decision is in part enhanced by his reconnection with an old friend named Paola Franchi (Camille Cottin). At the same time, Patrizia conspires with her psychic Pina (Salma Hayek) to contract a hit on Maurizio.

There’s a lot going on here, but I’m not sure we need this film to be a whopping 158 minutes long. Even with eight minutes of credits, this is a full 2 ½ hours long, which makes it nearly as long as The Godfather. There would seem to be a good 20 minutes (at least) that could be painlessly excised from this without losing much in the way of story. I wasn’t bored watching this, but I did wonder a couple of times how much longer it was going to be until the hit on Maurizio. There’s no need for it to be this long.

It is also well acted. It’s hard to fault the cast in general—this is a solid group of people on camera from top to bottom. But all of them are speaking with affected Italian accents. I get that this is a film that takes place in large part in Italy and that the characters are all Italian and speak Italian, but I do wonder about our need as an audience for this bizarre affectation. Is the story enhanced by Adam Driver trying to sound like he’s from Tuscany?

I didn’t dislike House of Gucci, but I also can’t say that I loved it. It was fine, but it’s also not a movie I think I need to watch a second time. It’s good, but not great, but I would raise my rating of it by at last half a star if it were more efficient in getting to the end.

Why to watch House of Gucci: Fashion-based The Godfather.
Why not to watch: Did this need to approach three hours long?