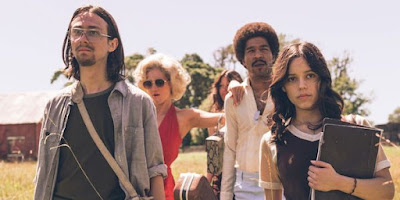 When you think about horror movies in generic terms, sex and death are probably the two words that come up for most people. That is the simple genius behind X, Ti West’s latest horror film. The conceit here is that in the late 1970s, a group of people rent a place in the middle of nowhere in Texas to shoot a pornographic film. It turns out that they chose poorly and all sorts of bad things happen to them. Like plenty of horror movies, X is little more than its elevator pitch in terms of plot, and like many horror movies that use this sort of story, it doesn’t really need a great deal more than the elevator pitch to serve as the plot.

We’re going to have a group of six on their way to make the film. Executive producing is Wayne (Martin Henderson), who evidently has a history of poor returns on money-making ventures. RJ (Owen Campbell) is the prospective film director whose goal is to produce an artistic pornographic film, something more than just smut. He is accompanied by his girlfriend Lorraine (Jenna Ortega), who is essentially the entirety of RJ’s crew. Acting in the film are Jackson Hole (Kid Cudy), Bobby-Lynne (Brittany Snow), and Maxine Minx (Mia Goth), who is in the role of what we assume to be our final girl. She is also Wayne’s girlfriend and is single-minded in her goal of becoming famous.

Trouble starts pretty quickly when they show up at the farm in Texas where they have agreed to rent a place to stay while they make their film, which they are doing without the owners of the farm knowing. The owners, Howard (Stephen Ure) and Pearl (a dual role for Mia Goth) are extremely elderly and seem somewhat affected by their age. Howard is threatening and tends to carry a shotgun while Pearl seems detached, affected by dementia, and perhaps jealous of the youth and promiscuity of their new guests.

Of course thins are going to go sideways pretty quickly. Howard and Pearl are very clearly not what they seem, and the farm is a lot less safe than they were led to believe. Of course that’s the case—that’s what makes this a horror movie.

There’s a great deal here that is never fully explained, but that kind of works for the film. X isn’t really so much about making sense or giving us anything like a tidy package with all of the loose ends tied up. It’s much more about the traditional thrills of a horror movie. We get a lot of sex, particularly when we are watching scenes of the proposed porn being shot (the name of the film is The Farmer’s Daughters and what’s evident of the plot is essentially the set up of every farmer’s daughter joke in history). And, naturally, there’s going to be a great deal of violence, which is not at all shied away from.

This is both a strength and a weakness of X. On the one hand, this is a movie that gives the average horror movie fans exactly what they want. There’s nudity and sex, and there’s a considerable amount of violence—knives, pitchforks, guns, and even an alligator. For many a horror fan, nothing more is required or asked of the film. Boobs and blood—it covers both of those bases completely.

But because of that, this is also a bit disappointing. Other than a lament for her lost youth and feelings of her wasted life, there’s not a lot here that feels like impetus for any of this to happen. Pearl is just…jealous of what is happening around her and lashes out with lethal force, assisted by her husband. Both members of the old couple are simultaneously angry and disgusted by the film crew and also desirous of being the film crew in a sense. They want the sex they can’t have and lash out because of it. That might be enough, but it doesn’t explain what Lorraine finds in the basement, at least not fully. There’s a lot of work that needs to be done here by the audience. We’re given a lot of the parts of the equation, but none of the operations that lead to the solution. We have to intuit those ourselves, and while that’s a fair way to make a movie, it seems like a lot to ask of an audience that just wants tits and violence.

Why to watch X: Because sex and violence are why most people watch horror movies.
Why not to watch: It requires too much work from the viewer.