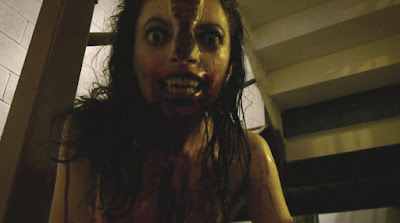 It’s time to dive head-first into that most horror-y of subgenres, the anthology film. V/H/S came out in 2012 to something like fanfare, at least in terms of horror anthologies. Truthfully, horror is one of the only genres where the anthology works at all, and really this is true only because it’s not that hard to get a good scare worked up in a few minutes. That said, the problems that other genres have with anthologies are still suffered by horror movies. There’s not enough build-up to really care about the characters, which means that deeper emotional levels are difficult to achieve. With horror, that means we’re going for the gross out rather than real terror most of the time, and I’m just not that interested.

Of course we’re going to have a framing story here. In this case, our frame is a group of guys who go out and commit a variety of crimes and film themselves doing so, and then sell the tapes of their work. These crimes include petty vandalism and a series of sexual assaults on women in parking lots. When the film starts, we learn they have been offered a large sum of money to break into a particular house and steal a specific video tape. When they arrive, they find a dead man sitting in front of a collection of televisions and a huge set of unmarked V/H/S tapes. And, of course, things are going to go downhill from here.

Outside of the framing story, there are five stories for us to watch. These are:
Amateur Night--three guys go out on the town looking for sex. They have outfitted a pair of glasses with a video camera and microphone for one of the guys to wear. Eventually, the trio brings back a few girls to the room, one of whom appears to be only capable of saying, “I like you.” Turns out she’s not quite what she seems.
Second Honeymoon--a couple are on their second honeymoon and are repeatedly approached by someone who eventually manages to find her way into their motel room.
Tuesday the 17th--a cute pun on the name of the Friday the 13th series, a group of people go to a deserted spot where it turns out one of them encountered a supernatural being previously and managed to escape. She has returned with others to act as bait to try and attract the creature once again.
The Sick Thing that Happened to Emily When She Was Younger--a woman video chats with her boyfriend about some strange physical problems she has been having, including a weird lump in her arm. Also, her apartment appears to be haunted.
10/31/98--a quartet of friends go out on Halloween for a party, but end up at the wrong house. The really, really wrong house.

The twist to the anthology feel of V/H/S is that all of these are found footage films, which means crappy editing, sloppy camera work, and a lot of static-filled shots. So, in addition to having stories where the characters aren’t developed in any meaningful way, we have to deal with the fact that the films themselves are difficult to watch.

If you asked me what could be done with these films, the truth is that a few of them have potential to be made into something bigger. The first story, the one that I think has probably the least story potential, is one that actually has been converted into feature length, a film called Siren released in 2016. Since there’s not a lot to the short version outside of nudity and misogyny, I can’t imagine that it’s worth seeing.

Actually, misogyny is kind of a catchword for a lot of this project. The framing story certainly has elements of this as our “protagonists” assault women in parking lots and attempt to take their clothing so they can be filmed nude. It’s just unpleasant, and is in fact so similar to the first story that, because I had looked away for a moment, I wasn’t sure we had actually slipped into the first story. None of the stories are that great, but there is some potential in them. The creature in the third film could be interesting in an expanded film, and the fourth story plays a great deal like an episode of The X-Files.

But beyond that, there’s not a lot here. V/H/S combines two of the worst trends in the genre—short anthology films that aim for gore rather than substance and found footage—into a whole that is less than its premise.

Why to watch V/H/S: Horror is really the only genre where anthology films work.
Why not to watch: They don’t work that well, though.