Most Misleading Title in Years 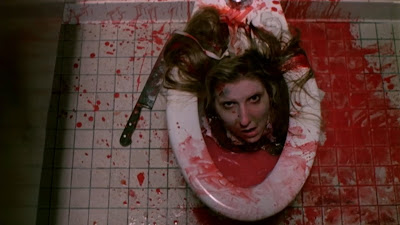 There are expectations when it comes to an early-‘80s slasher movie. You expect a few nasty kills with some sort of sharp implement, a couple of jump scares, and a decent amount of T & A. I’m not a huge nudity guy when it comes to movies in the sense that it’s not something I generally look for in a movie. But, as I say, there are expectations that need to be dealt with. A slasher movie of the vintage and name of The House on Sorority Row? This should be crammed full with shower scenes and gratuitous nipple shots. And, because I’m making this a point of discussion, it clearly isn’t.

If I’m not a huge T & A fan, why is this an issue for this specific film? Because—and I know this is probably going to catch me some shit here from at least a few regular readers—slashers of this era don’t really have a lot more to offer. We know going in that we’re going to get some sort of mutated killer. He’ll have either physical deformities, be mentally aberrant, or both (probably both), and that he’ll kill off half a dozen to a dozen people, many of them scantily clad nubile women. Depending on how daring the director is, we might get a few quality kills, but will more than likely get something akin to a raised knife (or cane with pointy bits in this case) and implied flesh piercing with said object. Honestly, the least the filmmakers could do is give us a bit of skin.

Anyway, the movie starts with a birth gone bad. We’ll learn about this eventually. We doodley-doo to the film’s present, where a septet of young women are graduating from college. Wanting to celebrate, but low on funds, they return to their sorority and start to get themselves good and plastered. Their house mother, the angry and domineering Mrs. Slater (Lois Kelso Hunt), returns and demands that they stop the party. We’re told that she is legendarily angry and mean. One of the girls (honestly, there’s so little difference between them I’m only going to name one of them) sneaks a boy into her room. The two get biz-zay until Slater comes in and destroys the girl’s water bed. Now, the seven decide they need revenge. Well, six of them do. Katherine (Kate McNeil), who is clearly our final girl here, has second thoughts.

But, we’re going to go through with it. The girls take Slater’s cane and put it on a floaty, pushing it into the middle of the genuinely skanky and unclean swimming pool. Then, just for fun, they threaten her with a pistol to go get her cane. Of course, things go wrong and they end up shooting the old woman, killing her. Instead of dealing with the problem, they decide to tie her up and toss her in the pool, hoping to deal with her the next day, since they certainly aren’t going to cancel the party they have planned for that night. Anyway, naturally the body is missing, and suddenly the girls are getting picked off one at a time as well. Who could be doing it?

And that’s really it. It’s a standard slasher in the sense that we’re going to go all Agatha Christie “And Then There Were None” on this, losing one of the sorority sisters every five minutes or so once things start happening and we get down to our final girl, who is pretty much the only one even mildly different from the rest of the group. There are a couple of unimpressive twists and turns before the final credits and the movie has the lack of originality to end on a cliffhanger, setting up a sequel that apparently never materialized.

Is this the worst slasher I’ve ever seen? It is not, but it’s also not anywhere near being good enough to recommend. This is why I made the T & A comments at the top. Since aside from a couple of frames in a couple of scenes there is no nudity here, there is absolutely nothing to recommend this film for. The plot is one you’ve seen before, the twists are relatively predictable, the deaths are standard in most ways and generally happen just off camera, and the women themselves aren’t particularly unattractive but are similarly not too beautiful by 1983 standards. The least they could have done was a topless pillow fight. And again, this is coming from someone who has never used this as a criterion for whether a movie is worth watching.

Honestly, that should give you an idea of just how dull this really was.

Why to watch The House on Sorority Row: Great, suggestive name?
Why not to watch: It’s dull.